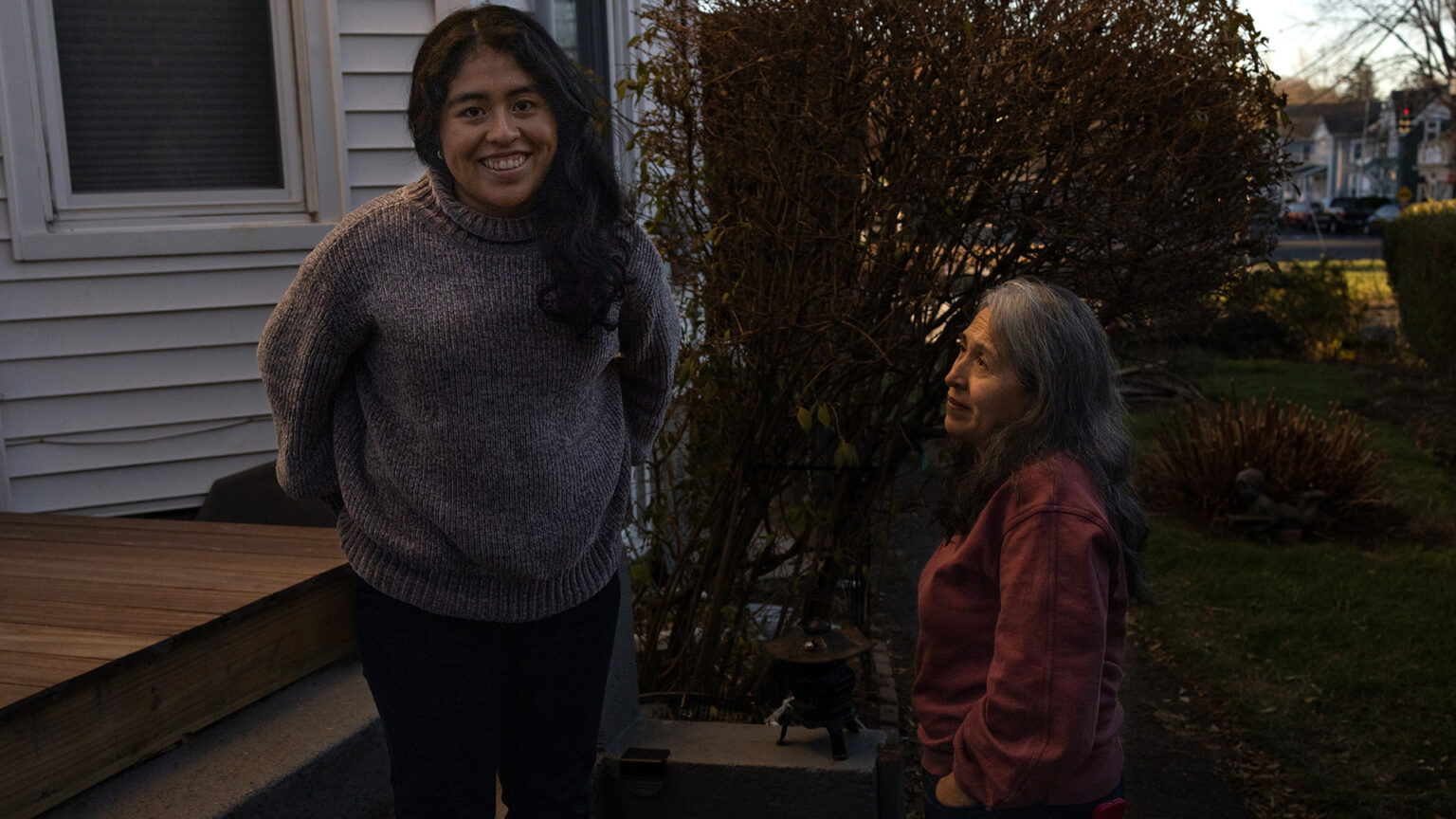 Gladis Castro, 57, and her daughter, Carla Castro, 27, are both certified nursing assistants (CNAs) who cared for each other in their Danbury home in April 2020 when they were both sick with COVID-19.

A patch of dirt in the northwest corner of their back yard, bounded by a chain link fence, a stone wall and a garage that houses feral cats, has become a happy place for Gladis Castro, 57, and her daughter Carla, 27.

The Danbury mother and daughter have found purpose and meaning, and built a strong relationship, in a simple garden that has connected them with nature, given them food and provided a diversion from the COVID-19 pandemic.

Just being outdoors has become increasingly important to them in caring for their long-term respiratory effects from the virus. Inhaling the early-morning air while working in her garden often reminds Gladis Castro of Santa Isabel, her village in the Andes mountains of Ecuador.After a morning summer walk the two made smoothies with freshly picked red raspberries from their garden. Kitchen compost is dutifully added to the soil. In the fall they simmered deep, rich, orange cubes of calabaza, winter squash, into a sweet, zesty stew in their second-floor apartment.

Western Rehabilitation Care Center, a 180-bed facility in Danbury, is a short drive for Gladis Castro from her Triangle Street home. In 2015 she began working full-time at Western Rehab as a certified nursing assistant (CNA). She likes to help people, she says, and to take on new challenges. In March 2020 she was earning $15 an hour while working the 3 p.m. to 11 p.m. shift on Three West, the west wing of the third floor. She was assigned to take patients’ temperatures using a small digital thermometer placed under the tongue.

One patient in particular, a male, diabetic and in his mid-40’s, had a fever and was coughing a lot, recalls Gladis Castro. The staff suspected he had the flu. Gladis Castro provided direct patient care for him without any personal protective equipment (PPE) – no mask, no gloves, no gown – placing herself at high risk of exposure to any infectious respiratory disease.

“We thought we were safe. But, no. Especially in the area where I worked on Third West,” she says. After two days her patient still had a fever and she voiced her suspicion to a nurse supervisor that he was infected with COVID-19. Her supervisor dismissed the idea, saying that it was impossible that the patient could be infected with COVID-19 because the facility was closed to outside visitors.

Moving Back to Danbury

Gladis Castro reached out to her daughter, who was in the final stretch of obtaining her master’s degree in clinical research at Boston University, for moral support. She didn’t want to be alone.

Carla Castro began the semester with a part-time job – dog walking – up to 12 miles a day. Living in Boston was expensive, she says, and the job paid well. With her classes scheduled in the evening, she focused on completing her thesis and landing a job with a large Boston medical center.

But at the start of her spring break in March, Carla Castro answered her mom’s call and soon after arrived in Danbury on a Greyhound bus.

The next morning, she snapped an iPhone photo of her mom wearing a homemade mask made from a napkin folded accordion-style. Personal protective equipment at the nursing home was scarce and many CNAs brought their own protective gear.

When Gladis Castro showed up for work she learned that a co-worker had gone home early from Western Rehab with flu-like symptoms. A few days later Gladis Castro called in sick with body aches and fever. A COVID test at Danbury Hospital confirmed she had the virus.

“I really needed to be here,” says Carla Castro about coming home to Danbury. She was monitoring her mom’s temperature, providing her with liquids and Tylenol. She tried to isolate in her bedroom as much as possible to avoid catching the virus. She had experience caring for others: as a Danbury High School senior she had taken a class to become a CNA, and after graduation she worked for a year at Western Rehab with her mother.

At home, she made her own PPE to care for her mother, using a trash bag as a gown, a napkin with rubber bands as a mask, and whatever disposable gloves she could find. In between, she finished her college work online, graduated, and attended to Jude, their Yorkie-poo.

Gladis Castro had a fever of 102.3 and rising. She was afraid and too weak to get out of bed. “I didn’t think it would hit me so hard. COVID was stronger than me,” she recalled in her small living room. “I said to God, ‘I can’t stand up. What’s wrong with me?’”

Fiercely independent, Gladis Castro has always met adversity head-on. In the sixth grade, she was discouraged by her father from pursuing her dream of becoming an architect. He wanted her to be a seamstress.

Gladis Castro studied English in Cuenca and then taught elementary school in rural Ecuador for a few years before immigrating to New York in 1994. Dissuaded by a brother from joining him in Chicago, she pivoted to Danbury, fell in love, and had a daughter she named Carla Jennifer.  She worked hard and saved enough money to purchase a two-family home as an investment.

She endured fever and body aches for most of April despite taking Tylenol every eight hours.

“One day I couldn’t breathe but I had to go to the bathroom,” Gladis Castro recounts. “Like an infant I crawled so I wouldn’t fall. I returned to my bedroom crawling, saying to myself, ‘This is it. Am I going to die?’”

“To die without air is terrible. It’s horrible,” she said. Going to the hospital was not an option because she didn’t want to be intubated. Danbury Hospital was at capacity with infected patients, she reasoned to herself, gasping for air. She’d rather die at home anyway, she told herself.

“I was watching TV [news] and thinking the worst. Saying to myself, ‘If I die they’re going to cremate me, no one will say goodbye to me, and they’ll just toss me away like worthless garbage.’”

A selfie taken on a Saturday in April shows mom and daughter on their living room sofa, unmasked. They were now sick together. Carla Castro’s symptoms were primarily heavy coughing, a sore throat, and gastrointestinal distress.

To pass the time, they binged shows on Netflix, such as Manifest, because it had the option of Spanish subtitles, which Gladis Castro prefers.

Gladis Castro, a member of SEIU 1199NE, the New England Health Care Employees Union, was well enough to participate in a town hall Zoom call with U.S. Sen. Christopher Murphy and frontline workers to discuss emergency funding for PPE in Connecticut’s nursing homes as well as payment compensation for health care workers out sick with COVID-19 for extended periods. In the video, Gladis Castro holds up a disposable medical mask that she says she reused at work for an entire week.

At the start of the pandemic, nursing home residents and staff were hit hard.

In January 2021, the Kaiser Family Foundation reported that the pandemic had disproportionately affected residents and staff in nursing homes and other long-term care facilities, accounting for 6% of all cases and 38% of all deaths nationwide.

“Returning to work was the cruelest part. It was really difficult,” Gladis Castro says, because of short staffing at Western Rehab. Where there had been five CNAs sharing the workload on the third floor, there were now three. It was the beginning of May 2020 and co-workers were either getting infected, quitting their jobs, or retiring altogether, she says.

After finishing her college work on Zoom, Carla Castro decided to return to her Boston apartment until her lease expired in August.

On Aug. 10, Gladis Castro drove a U-Haul to Boston to help her daughter move back to Danbury.

“Life’s short. There were no boosters, yet. And it was really expensive for me to live in Boston by myself,” reflects Carla Castro.

While applying for jobs, Carla Castro volunteered trapping, neutering, and returning feral cats while fostering at least 20 other cats, she says, during the pandemic. A year ago, Carla Castro began to feed Bebe, a pregnant feral cat. She eventually trapped her and brought her into their apartment, where she gave birth to three kittens, Churchill, Elizabeth, and Harry – their names inspired by The Crown television series.

Carla Castro says that their pets give them emotional support.

After a year and a half of job searching, Carla Castro was hired at the Yale School of Medicine as a clinical research coordinator in May 2021. Full-time employment came with the benefit of remaining at home with her mom and saving money.

In June 2021, Gladis Castro cut back to part-time at Western Rehab, now earning $18 an hour, after accepting a full-time position in the facilities operations and services department at Western Connecticut State University.

On a recent Sunday afternoon Gladis Castro helped clear the first December snowfall from streets, parking lots and sidewalks at the university. She arrived home at 10 p.m. and hours later rejoined the crew at 5 a.m. After a few hours of sleep, she then started her regular 4 p.m. to 12 a.m. shift cleaning classrooms. She says she enjoys the low-pressure, mostly solitary job.

Gladis Castro has had one booster shot and is unsure about getting the remaining doses. She suffers from joint pain, especially in her hands and knuckles. Her left lung is deficient because of COVID.

Carla Castro is now asthmatic and carries an inhaler, also as a result of COVID. She’s become a self-proclaimed germaphobe.

They both walk twice a day and avoid large crowds. Gladis Castro admonishes unmasked strangers who cough in public places, like inside a supermarket, and then offers one of many extra masks she carries with her.

COVID-19 is a call to action, says Gladis Castro, to learn to love and care for ourselves. We have to because there are more pandemics to come, she says. She neither harbors anger against nor places blame on Western Rehabilitation Care Center for becoming so sick with COVID-19.

They did everything possible, she says. “We were all victims.”

Their plan for 2023 is to relocate closer to New Haven so that Carla Castro will have a shorter commute to work.

It needs to be a place, Carla Castro says, with a larger backyard to create another garden together.

The Pandemic Changed Their Lives – And Brought Them Closer Together was first published on Connecticut Health I-Team.