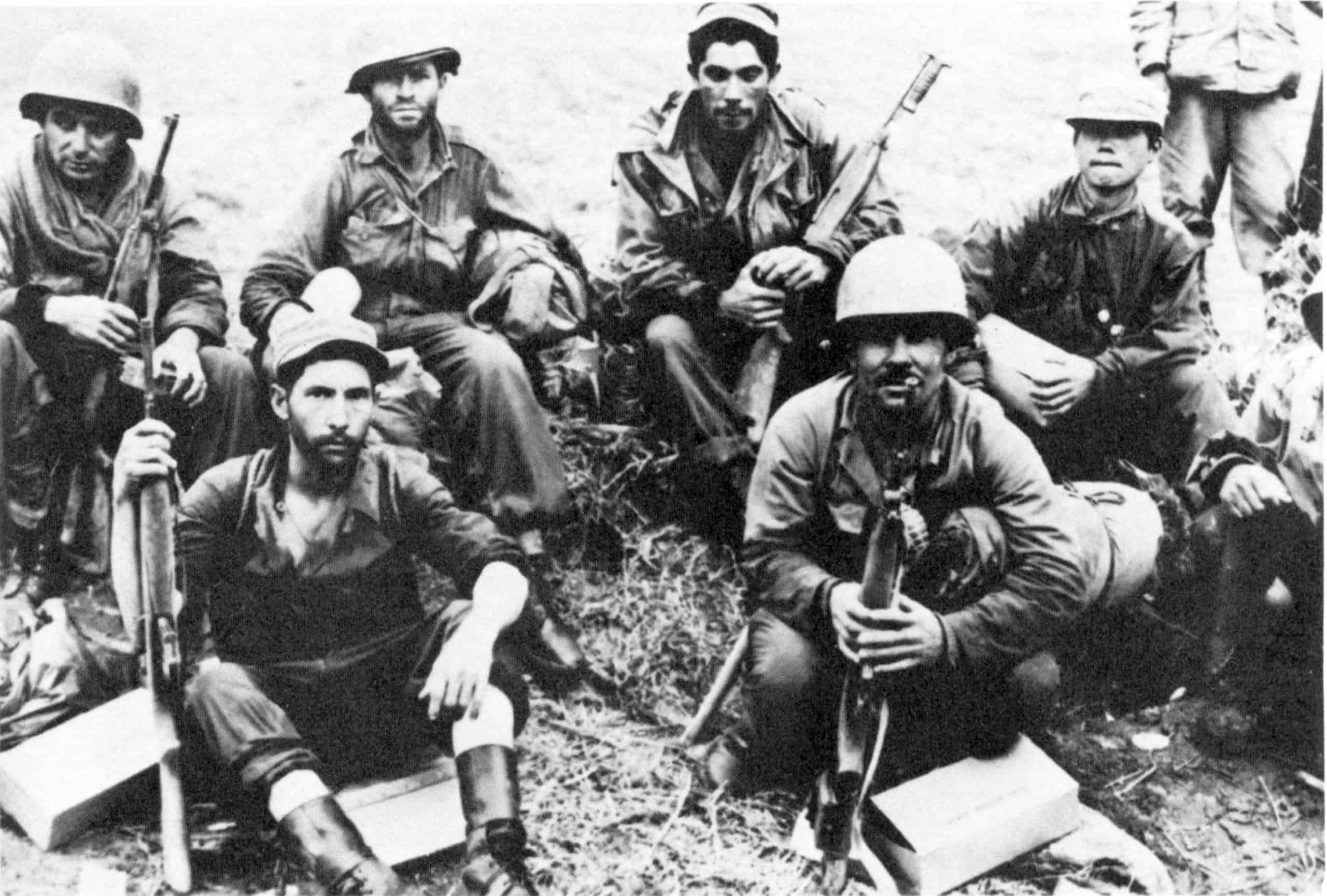 A recent screening of The Borinqueneers (2007 film) at the Spotlight Theatres in Hartford, Conn., proves that the legacy of the Puerto Rican 65th Infantry Regiment is still at the forefront during Veterans’ Day celebrations.

However, “at the forefront” was not where the Borinqueneers always were. Their memory, their legacy, was at one point buried deep in the National Archives. That is until Noemi Figueroa Soulet dug it up in 1998.

Prior to this, the 65th Infantry Regiment was little known or understood by current society. Sure, during WWI, WWII and the Korean War, this first-ever all-Hispanic regiment in the history of the United States Army was well-known and celebrated by the Puerto Rican people but a convoluted incident during the Korean War led to a court-martial hearing, tarnishing the regiment’s reputation and their memory was soon swept under the rug.

The story of the Borinqueneers is complex. It reaches deep into the heart and soul of America, and what it means to be a Puerto Rican in America. What it means to fight for a country that doesn’t entirely accept you. It is timeless and also frozen in time. It is history and also here with us today. There are lessons of honor and there are lessons of loss, tragedy and broken loyalty. It is a dynamic powerful story that so many people who have ever faced discrimination in this country can relate with. Anyone who has ever served in the military can relate to it.

Figueroa Soulet never imagined she was getting herself into a 9-year journey when she set out to create a documentary. In fact, she didn’t set out to do a film about the 65th at all.

Here is her story of how it all began:

“Well, you see, I was a professional actress for 17 years in New York. During my time as an actress, there were a lot of stereotypical roles that I used to go have to audition for: prostitutes, gangbangers, maids … and because of this, I would go see films looking for the Latino image and how it was represented. Around that time period, if I’m not mistaken, Saving Private Ryan came out, and it occurred to me that Hispanics had been serving in the armed forces in the country for many, many years. I know in my family I had representation. My father was a war veteran, and I have two uncles, one served in Vietnam and one was a Marine that got wounded. Also, at the time I was married and my husband’s father had served in WWII. So, I knew that practically every Puerto Rican has a veteran in their family, at least one, and I felt that there was a lack of that representation in the movies.

“My original idea was to do …  my working title was called: Puerto Rican Soldier, and I was going to cover all the wars. That wouldn’t have been one documentary film, it would have been a few. So, I started doing research and I said to myself, ‘Oh, this is going to be a cinch. They are going to give the money away … nobody has done this before.’ And my husband at the time said, ‘You know, I think this is going to take you longer than 2 years’, which at the time I estimated it would take me. And so I started doing research and I ended up bumping into the 65th in an obscure book in Spanish in the Bronx library—because there wasn’t a lot of information back then, either online or in books in English—and there was a little paragraph that I read that mentioned a court-martial and my ears perked up, and I said, ‘What is this?’ Because they really didn’t go into detail. So that got me motivated.

“Once I started doing research I realized that the story of the 65th was so rich, and covered such a span—WWI, WWII, Korea—that the focus needed to be them. And the fact that I was a Puerto Rican, was born in Puerto Rico, was raised in New York, went there when I was a year-and-a-half and I had never heard of the 65th … and I thought to myself, ‘That’s a shame. Those are our heroes.’ And we needed to learn about them, not forget about them, and we needed to teach not only the general American public but our youth about these heroes.”

As Figueroa Soulet began her research, she started to connect with others who were on similar missions. “What happened was that along the way I started collaborating with other people who had an interest in the 65th,” she explains. “Most of them were military themselves, most of them were sons of Borinqueneer veterans—they had research on the court-martial, they had contacted the secretary of the Army who at the time was a Mexican-American named Louis Caldera to review what had happened because the official Army record on that was very one sided. And the secretary of the Army agreed and they did a study, a monograph. Villahermosa was a West Point graduate whose father had been a Borinqueneer and served in Korea. Ultimately he decided the 65th needed more than a study and wrote a whole book on it called Honor and Fidelity. So we started collaborating.

“I don’t think that I would have been able to do this film, or they would have gotten the Congressional Gold Medal without the internet. Because it is the way of connecting all the Puerto Ricans both on the mainland and in Puerto Rico.”

The ripple effect that these very few collaborators had was enormous. Figueroa Soulet says, “People started going crazy about the 65th.”

Communities started naming streets after the regiment, monuments were erected in parks, and, of course, the grassroots movement to award them the Congressional Gold Medal started up.

“I do feel that the film, like anything, brought awareness,” says Figueroa Soulet. However, she admits: “The last thing I imagined was that it would lead to these men getting the Congressional Gold Medal, which in my mind is really the icing on the cake, on whatever I may have sacrificed, personally, to get the story out … and to see these men smile when they get the medal. Because over the years they would send me their little $10 checks and be like, ‘Noemi! You’ve been working on this a long time when are you going to finish it?’ and it would break my heart and I would say to them, ‘I can’t promise I will finish it in your lifetime but I promise I will finish it in mine.’”

She continues, “And if you are going to ask me what kept me going those nine years, the answer is that I ended up bonding with so many of them. And for the first time in many of their lives, someone was asking them about their war experiences. I was interviewing them, I was interested, and they really, really felt that they were the forgotten soldiers of the forgotten war. That’s how they saw it.”

Figueroa Soulet says funding was a big obstacle, convincing others of her vision proved difficult. Because, despite what we would hope, a story of an all-Puerto Rican regiment who, as historical documents account,  basically abandoned their post, were court-martialed and imprisoned, was not the greatest story of courage and strength that people were looking to finance. However, if you dig a little deeper, you find, in fact, this story is the epitome of courage, strength, and honor that anyone could ever hope to find.

Being a first-time filmmaker also came with a learning curve. While she learned quickly, her mistakes were not without setbacks. A small detour to small claims court with her first camera crew not only set her back in funds but she had to redo many interviews.

“It was extremely difficult,” she recalls, “You could have a great story and it not go anywhere if you don’t know what you are doing. If you don’t have good mentors, if you don’t have standards. You know, PBS has certain standards of quality for broadcast. So it was difficult to maneuver all that.”

Was it difficult? Yes, but rewarding … extremely. Figueroa Soulet speaks passionately about the project and the people she met along the way, saying that the film has changed her life: “I feel like I have hundreds of adopted fathers. I feel very appreciated by them. I have been given little awards here and there, but nothing feels the same as when I get a little handwritten note from a veteran thanking me for the film and keeping their legacy alive. That means more to me than anything. That was my payment. That is what has kept me going.”

And on the recent screening of The Borinqueneers in Hartford she says: “I think it’s great that so many years later there is still an interest. There are still a lot of people who have not seen the film and as long as it is in the forefront, I think it is great. These are my heroes and they are going fast. I feel that we need to honor them while they are still with us because they are not going to be with us much longer.”

A Brief History of the 65th

Puerto Ricans occupy a special place in the history of the U.S. Army. Because of the island’s commonwealth status, they don’t have the right to vote in U.S. elections, and yet they serve in the military and can be drafted. For many of the veterans of the 65th, as Figueroa Soulet states on her website: “This paradox became an incentive to be even more patriotic, to prove themselves in battle 200 percent.”

The 65th Infantry Regiment was created in 1899 by the U.S. Congress as a segregated unit composed primarily of Puerto Ricans with mostly continental officers. The regiment served from 1899 to 1956, meritoriously in three wars: World War I, World War II and the Korean War. The unit was nicknamed after “Borinquen,” the word given to Puerto Rico by its original inhabitants, the Taino Indians, meaning “land of the brave lord.”

The 65th was a unique unit that faced unique challenges including discrimination within the Army. Figueroa Soulet’s slogan, if you will, for her film is: Their Toughest Fight Was Not On the Battlefield. She describes a scene toward the end of the Korean war where soldiers were being sent in and bi-lingual sergeants were being replaced by non-bilingual sergeants and how quickly chaos ensued, which, of course, led to the historical court-martial hearings where several men were sentenced to 18 years hard labor. Later this was overturned.

A huge effort was put forth to recognize the circumstances that surrounded the 65th. The United States Army and the country, now, not only recognizes their contributions and atoned the regiment for abandoning their posts in the Korean War (the court-martial fiasco), but awarded the 65th the Congressional Gold Medal in 2014.

In this article:Borinqueneers, puerto rican veterans

Bill Sarno/CTLatinoNews.com Scores of dignitaries and officials, including the governors of Puerto Rico and Connecticut, plan to attend the ribbon cutting set for...

CTLatinoNews.com 'Champions of Change' For 2017

Every year at this time, we at CTLatinoNews.com take a look back at some of the people and issues we have covered during the...

When a long-awaited monument to the 65th Infantry Regiment, known as the Borinqueneers, becomes a reality this fall in New Britain it will not...