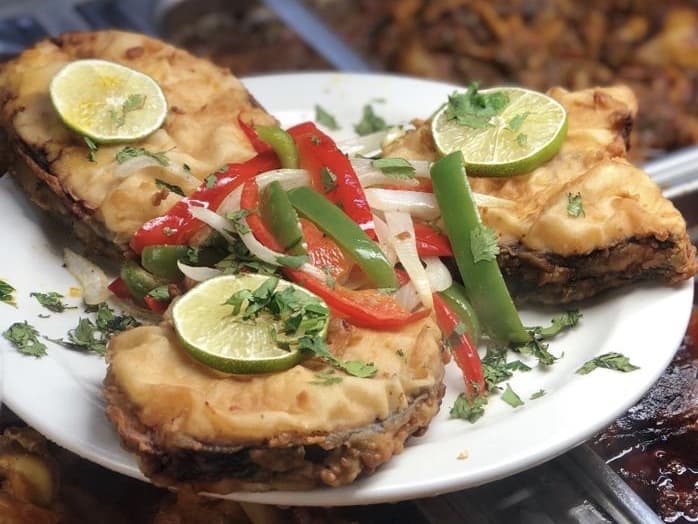 Hear from the 4 owners of the restaurants at El Mercado

At Autentico it’s all about the ceviche! The lemon marinaded fish, mussels and squid 🦑 are as fresh as they come. With more than 3,000 Peruvians calling Hartford their home, Autentico has to live up to several competitors in the area…and they do just fine 👍🏼.

Peruvian cuisine is as diverse as its topography. The fundamentals in the Cusqueñan diet are potatoes, rice, soups, corn, and lots of meat, from alpaca to chicken to pork…and cuy AKA guinea pig.

Yeah, for some cuy is a pet, but for most Peruvians, it’s just like any other meat on a plate. The traditional recipe calls for stuffing the whole animal with local herbs, then roasting it over an open wood fire and serving it with potatoes.

–Pollo a la Brasa: probably the most well-known Peruvian dish in the U.S. A whole chicken marinated in garlic, herbs, and spices roasted on a spit, giving the bronzed, crispy skin an earthy taste.

–Anticuchos : the heart (alpaca or beef) cut into one-to-two-inch cubes, marinated in vinegar, cumin, ají, and garlic and grilled over charcoal to a medium-rare. The cubes are often served on skewers with sliced onion or potato.

Go to this traditional Mexican restaurant for all the favorites like tacos 🌮 al pastor, and treat yourself to carne asada, gorditas and tortas!

You can never go wrong with recipes that are 9-thousand years old beginning with the Mayans, Aztecs and later Spanish influence.

Hard to give a Top-5 must-haves when it comes to Mexican food, but here are four other dishes for you to try:

–Mole Poblano: the staple of this dish is a rich sauce popular in Mexican cooking. The base ingredients are cloves, cinnamon, Mexican chocolate, pepitas (pumpkin seeds), peanuts, almonds, and raisins. Mole is typically served over turkey or chicken.

–Guacamole: undoubtedly one of the most popular dishes, dating back to the time of the Aztecs. It’s made from mashed-up avocadoes, onions, tomatoes, lemon juice and chilli peppers. Who hasn’t had guacamole with tortilla chips?!

–Elote: You’ve never had corn on the cob like this! The corn is traditionally boiled and served either on a stick. Salt, chilli powder, lime, butter, cheese, mayonnaise, and sour cream are then added in abundance.

–Pozole: a pre-Hispanic soup of chicken, pork is an everyday staple; made from corn with plenty of herbs and spices. Pozole is typically served on New Year’s Eve.

Colombia’s varied cuisine is influenced by its diverse ethnic groups; dishes and ingredients vary widely by region. It is one of the world’s largest consumers of fruit juices.

Aside from the bandeja paisa, other representative dishes are:

–Fritanga: a huge platter of grilled meat such as chicken, beef and pork, with fried plantains.

–Bunuelos: popular ball-shaped fried fritters made with cheese that are eaten as a snack.

And of course, no self-respecting Colombian would eat any meal without an arepa, the flatbread made from cornmeal is the basic side-dish.

This restaurant not only caters to appetites from Quisqueya La Bella, but also from La Isla Del Encanto 🇵🇷 with dishes like arroz amarillo con habichuelas, pernil and plátanos maduros.

Cuisine from the Dominican Republic resembles that of other countries in Latin America with indigenous Taíno, and African influences.

-Mangu is another popular recipe, consisting of boiled and mashed plantains.

In this article:El Mercado, Hartford