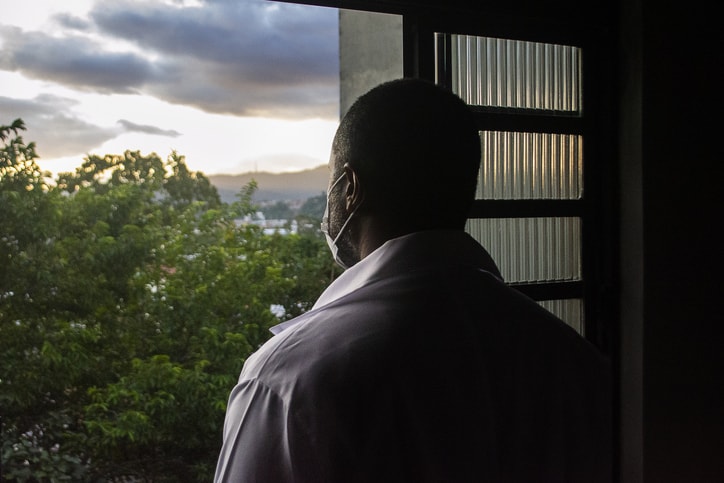 Soon after Minerva Cuapio, a 48-year-old Mexican immigrant who lives in New Haven, was laid off from her job at a dry cleaner in March, she developed a headache, an itchy throat and a dry cough.

Then came the shortness of breath that really worried her daughter, Izarelli Mendieta, 29, of New Haven.

While trying to get her mother care, she said, they were bounced from a doctor to the state’s COVID-19 hotline to a telemedicine visit back to the hotline and then to a drive-through testing center and an emergency room visit. The family waited nine days for Cuapio’s positive test results. Izarelli’s father, Pedro Mendieta, 55, who lost a foot to diabetes, tested positive, too, but had mild symptoms.

Minerva Cuapio and Pedro Mendieta have recovered, but their daughter, who translates for her parents because they only speak Spanish, said if she could meet Gov. Ned Lamont, she would ask him to make the process easier for families like hers.

“It was scary and confusing,’’ she said. “Honestly, if they didn’t have me to navigate for them, I don’t know how they would have done it on their own.”

Weeks into the pandemic’s spread in Connecticut, state Department of Public Health (DPH) data show that African American and Hispanic residents are testing positive for COVID-19 in numbers greater than their share of the population and that black people are dying at disproportionately higher rates than whites.

“By not making this a national imperative, the COVID-19 response has bared the ongoing issue of racial and ethnic disparities.”

Patricia Baker, President and CEO of the Connecticut Health Foundation

The DPH statistics lack demographic details for many COVID-19 cases. Still, as of Monday, in cases for which demographics are available, African Americans made up 18% of those who contracted the virus and 15% of those whose deaths were linked to the virus. They are 12% of Connecticut’s population.

Hispanic residents make up 16.5% of Connecticut’s population, but 24% of those who have tested positive. They account for only 11% of those whose deaths have been linked to COVID-19.

The health disparities are stark in New Haven, where Mayor Justin Elicker has reported that African Americans make up 43% of those hospitalized and 44% of those who have died from the virus. Hispanic residents of the city account for 28% of hospitalizations and 19% of deaths.

While several advocates and experts praised Lamont for his handling of the pandemic, some criticized the federal government for not acting sooner.

“By not making this a national imperative, the COVID-19 response has bared the ongoing issue of racial and ethnic disparities,’’ said Patricia Baker, president and CEO of the Connecticut Health Foundation.

Experts like Tekisha Dwan Everette, who have long witnessed higher rates of chronic conditions like diabetes, heart disease and asthma in black and Hispanic communities aren’t surprised by the apparent COVID-19 disparities. Everette, executive director of Health Equity Solutions, has made a career of fighting health disparities because of inequity she faced. As a child in Hampton, Virginia, whose family was on Medicaid, Everette, now 43, said, her asthma was misdiagnosed for two years.

Everette wrote to Lamont on April 2, asking for a racial and ethnic breakdown of COVID-19 cases. She told him that structural racism and historic inequities mean that people of color are more likely to suffer from chronic health conditions such as asthma and diabetes, work in low-wage jobs and live in densely populated neighborhoods. The pattern, in place for generations, has laid the groundwork for the susceptibility to COVID-19 among people of color.

Wizdom Powell, director of the Health Disparities Institute at UConn Health, worries that the disparities will get worse. She said covert and subconscious racial bias, even among well-intentioned health care providers, is likely affecting the testing and treatment of people of color. “I often argue that racism is a virus that takes on a new host,” she said. “The new host is COVID-19.”

Heightened risks for African Americans and Hispanics are paired with lower rates of health insurance coverage in comparison to whites, which can limit access to health care.

Baker also noted that the closing of many businesses is disproportionally hurting people of color, who generally earn less and have fewer savings than whites. They’re also over-represented in jobs where they can’t work from home, she said.

“They are the cleaning staff in the hospitals. They are my grocery clerks. They’re delivering packages,” she said. “They’re vulnerable because they don’t have the luxury of not showing up on the front lines of exposure.”

Ensuring better health outcomes, both from COVID-19 and in general, means addressing those underlying inequalities.

Baker urged the state to report racial and ethnic breakdowns of who is getting tested for COVID-19. Her foundation would also like to see an independent review of the state’s pandemic response to find ways to improve, she said, not as a “gotcha.”

Potter, who now advocates for reform as president of Businesses for Medicare for All, said substandard housing, high-deductible insurance plans and inadequate funding of community health centers might also be contributing to the COVID-19 disparities.

Even before the pandemic, he said, “If you’re not making a lot of money, you’re not getting the health care you need.”

Dr. Leo Lopez III, a National Clinical Scholars Program fellow at the Yale School of Medicine, blamed a lack of federal leadership for confusion and anxiety among many Americans, including people of color. He said misinformation might also be keeping some people of color from getting tested, and said he heard COVID-19 called “a white man’s disease” at a community meeting in New Haven in early March.

“This was a myth in the community,’’ he said.

The pandemic is stressful for many of the low-income and uninsured people who receive community health and patient navigation services from Project Access New Haven, said Lauren Kelley, the agency’s director of grants and evaluation.

Jackie Sanchez, the agency’s lead patient navigator, who has assisted Izarelli Mendieta’s father, Pedro, said her patients are practicing social distancing and wearing masks if they have to go out, but “they’re worried, and you can hear it in their voices.”

Eighty percent of the agency’s clients are Hispanic, and Sanchez said many of them believe God will protect them.

“They’re praying,” she said. “Their faith is what is keeping them sane.”

Solutions Journalism Network has a national database tracking how COVID-19 is affecting people of color here.

In this article:covid-19, Hispanics and Health, pandemic