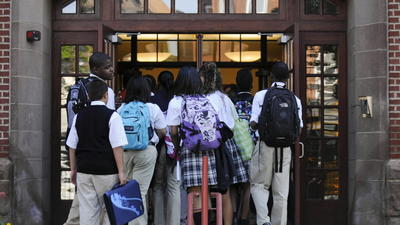 By JASON ROJAS
After more than two decades, it is time to re-examine how we are responding to Sheff v. O’Neill the school desegregation case.
As a parent of East Hartford Public Schools students, a state policy maker representing East Hartford and Manchester, and a taxpayer, I have grappled with this question for some time. The merits and intent of Sheff — to bring quality, integrated education to Hartford public school students — are beyond question. Outcomes are better for students if they are not trapped in communities and neighborhoods mired in economic and racial isolation. Children deserve to be educated in integrated environments.
I view the desegregation efforts through the lens of a community, East Hartford, that is struggling with many of the same social pressures that led to the filing of the Hartford court case in 1989 and its court ordered remedies.
East Hartford is regularly listed as one of the lower performing school districts in the state, after our major urban centers. Over the last 20 years, the number of East Hartford residents under the federal poverty line grew faster than the number in Hartford, 4,784 to 1,098. To be sure, Hartford continues to be home to a disproportionate share of the region’s poor and social service infrastructure but the pressures of poverty and economic isolation are increasingly suburban problems too. In East Hartford, 82 percent of our students are from minority groups and 59 percent of them qualify for free or reduced price lunch.
The primary strategy being used in the Sheff case, the creation of magnet schools, is having significant unintended consequences and opportunity costs for the region as we struggle to finance a public education system that is already underfunded.
East Hartford has more than 1,000 students attending magnet schools. If the goal is desegregation, how can it be that almost 80 percent of the East Hartford students attending magnet schools are members of minority groups? I fully appreciate the opportunity for the children from hundreds of East Hartford families to leave our underperforming schools, but it costs our under-resourced district almost $3 million in tuition to participate in magnet schools. Those departing students haven’t allowed us to reduce the cost of operating the town’s schools, which is really beside the point when we are chronically underfunded and have a school population with significant remedial and support needs.
Over the last 10 years, the state has spent $2 billion in the effort to desegregate Hartford schools. These are dollars in the form of massive school construction while, at the same time, Manchester closes schools due to inability to properly fund maintenance. Schools are being built at a time when many towns are contemplating the closure of schools due to state-wide declining school enrollment. Are we building more infrastructure than we can afford to maintain or make use of five years from now? Is there a way to make better use of existing schools in all towns?
Included in that cost is additional bureaucracy in the form of school choice offices and $140 million plus a year in school operating costs, which includes busing students all over the region. While we are close to meeting initial benchmarks, our ability to sustain the effort financially has to be considered.
I do not write to assign blame, to advocate for the closing of magnets or to diminish what has been accomplished by the current remedy. There are aspects to celebrate. I write in the hope that before the next costly agreement is made that we take into consideration the sustainability of the current remedy, its efficacy and what a more strategic approach might look like. Last spring, a 2008 agreement in the Sheff case was extended by one year, after which a new agreement must be forged, and those talks are underway.
So what do we do? First, we need to acknowledge that the current remedy has limitations and we cannot….