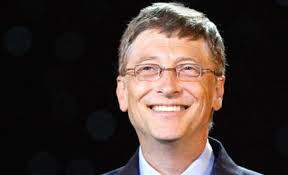 With a net worth of $72 billion, the Microsoft co-founder has now surpassed Mexico’s Carlos Slim as the world’s richest person, while remaining America’s richest man for the 20th straight year.

The news was released on Monday when Forbes debuted their annual list of the top 400 richest Americans. While most of the top names and rankings didn’t change from a year ago, the majority of members of the elite club saw their fortunes grow over the past year, helped by strong stock and real estate markets.
Investor Warren Buffett, the head of Berkshire Hathaway Inc., keeps second place with $58.5 billion, while Oracle Corp. co-founder Larry Ellison stayed third with $41 billion.
Brothers Charles and David Koch, co-owners of Koch Industries Inc., stay tied for fourth with $36 billion each.
Wal-Mart heirs Christy Walton, Jim Walton, Alice Walton and S. Robson Walton took the next three spots, with holdings ranging from $33.3 billion to 35.4 billion. New York City Mayor Michael Bloomberg, the founder of the eponymous financial information company, rounds out the top 10 with $31 billion.
According to Forbes, the 400 people on the annual list posted a combined net worth of $2 trillion, up from $1.7 trillion a year ago. That marks their highest combined value ever.
Meanwhile, the average net worth of the list’s members rose to $5 billion, the highest ever, up from $4.2 billion in 2012. Net worth grew for 314 members and fell for 30 members, Forbes said.
Net worth for America’s wealthiest people have risen in the years since the financial crisis, widening the gap between the exceptionally well-to-do and the rest of the country.

Kamyle Dunn used to sleep with her hand resting on her mother’s chest so she could feel it expand and contract and know that...