In the past 25 years, not one Latino has sat on the 15-member Los Angeles City Council. However, three Latina women are poised to change the status quo during the May 21 election.
Nury Martinez and Cindy Montanez are both frontrunners for the San Fernando Valley seat, Voxxi.com reports.
Martinez is a board member for the Los Angeles Unified School District, while Montanez is a former San Fernando City Councilor and was later elected as a State Assemblywoman.
Montanez originally planned to run for a spot on the Los Angeles City Council in 2005, but was overshadowed by another Assemblyman, Richard Alarcon, who decided to return to the council.

“I know it’s odd to say but I am the outsider in this race. I will have to rely on the grassroots to win this,” Montanez said.

In South Los Angeles, Ana Cubas is waging a “bitter contest” with veteran lawmaker and African American Curren Price. Cubas came to the United States as a refugee from El Salvador.
If Cubas secures a win, she will take on a seat that has “long been held by black politicians,” the report said.
During the race, Price accused Cubas of “dividing the Ninth (District) along racial lines,” but has since apologized for the statement.
County Supervisor Gloria Molina, who was elected 25 years ago, was the last Latina to serve on the council.
(Photo by nurymartinez.com, anacubasforcouncil.com, and cindyforla.com via Voxxi.com) 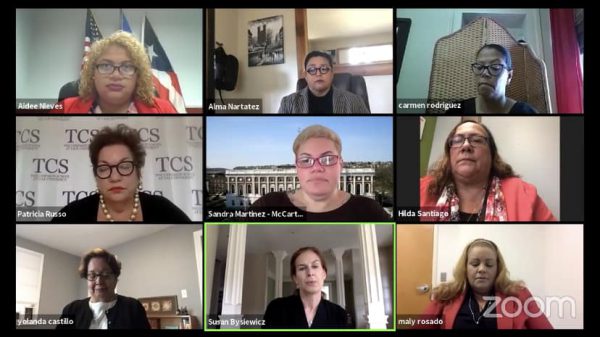 “If I was a man and I raised my voice, would I, would he be emotional? Would he be categorized as being challenging and...

More than 200 women, most of them Latinas, were sterilized between 1968 and 1974 by a Los Angeles County medical center, a little-known eugenics...

Young Jersey Vargas arrived at the Vatican Wednesday morning carrying a cloth handkerchief her mother sewed with the words “Nest of Love” across the...