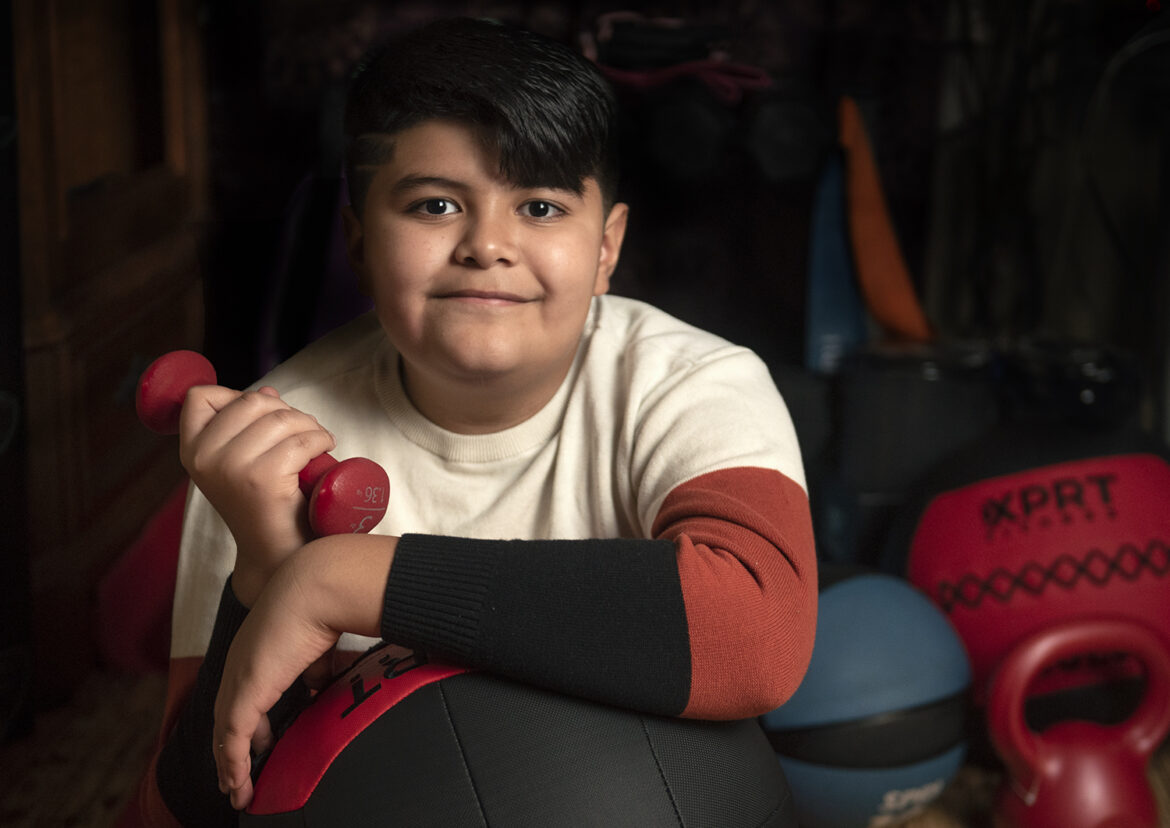 AngelGabriel Coronel, 10, of New Haven, has lost 12 pounds since joining the Bright Bodies program. He is heading into his third 12- week session. He has learned about healthy eating anf enjoys the exerise program. Melanie Stengel

Poor nutrition, stress and a loss of physical activity when schools closed during the COVID-19 pandemic appear to be worsening the problem of childhood obesity nationally and in Connecticut.

Nationally, obesity among youth ages 2 to 19 increased from 19.3% in 2019 to 22.4% in 2020, according to the Robert Wood Johnson Foundation. The same age group saw the rate of increase in their body mass index (BMI) double during the pandemic, the U.S. Centers for Disease Control and Prevention reports. The heaviest youths experienced the highest gains.

Pediatrician referrals of children have nearly tripled at the Pediatric Obesity Center for Treatment, Research and Education at Connecticut Children’s Medical Center in Hartford. In 2019, it had 890 referrals, which grew to 2,491 in 2021. It now has a waiting list of nearly a year, with 642 children on it, said Dr. Christine Finck, the center’s surgical director.

“The ramp-up in referrals was so acute and took us by surprise,’’ Finck said. “It’s really been a tough challenge.”

To meet the demand, the center is expanding its program—which offers nutrition education, counseling, and even bariatric surgery for children with severe obesity—into Farmington, Fairfield and Westport, said Dr. Melissa Santos, the division chief of pediatric psychology and the clinical director of the center.

“Kids’ rates of obesity are significantly higher now than they’ve ever been,’’ Santos said, with some patients weighing 400, 500 and even 800 pounds.

A variety of programs across Connecticut are tackling childhood obesity.

With 13 gardens at city schools, New Britain ROOTS teaches children to improve their eating habits by growing collard greens, spinach, lettuce, squash, and even tilapia in a new fish reservoir. Executive Director Joey Listro said ROOTS educates 500 children at a time, and it’s been therapeutic to see them back outdoors after the stress of the pandemic.

“Gardening has a very calming effect,’’ Listro said. “And if they don’t have media around them, they can be left alone with their own thoughts.”

One of the longest-running programs in the state is the Bright Bodies Healthy Lifestyle Program, which Mary Savoye, a registered dietitian, started 23 years ago at Yale New Haven Hospital. She said participants in the program have seen a 1.7-unit drop in their BMI after one year, compared to a 1.6-unit increase in the control group.

The effect of the pandemic on children’s weight and their ability to exercise has been stark, Savoye said.

“There was a limited amount of exercise happening and a lot of emotional eating,’’ she said.

She said nutrition also suffered in many households, where parents were buying unhealthy, processed food because it had a long shelf life.

In Hartford, Santos said isolation, stress and excess screen time when learning was remote contributed to childhood obesity. One of her program’s goals is to have the children spend no more than two hours a day online instead of the 12 or more hours she’s seeing. Its other “Fit5” daily goals are: eat five fruits and vegetables, have four servings of calcium, give and get three compliments, exercise for one hour and have no sugar-sweetened drinks.

Santos said some of her patients rarely went outdoors during the pandemic.

Many of Bright Bodies’ participants come from low-income families, and about two-thirds are Black or Latino—all groups disproportionately affected by childhood obesity, Savoye said.

But two participants say they’ve lost weight, are eating in moderation, and feel better about themselves now.

Sol Gonzalez of New Haven said her pediatrician recommended Bright Bodies last spring because her son AngelGabriel Coronel’s blood sugar levels put him at risk for diabetes. Since joining, AG, as his family calls him, has lost 12 pounds. The fifth-grader at Nathan Hale School said he gets less out of breath now playing basketball.

“Before, I used to think that other kids would make fun of me when I wasn’t looking, but now, I don’t think they really are,’’ AG said. “I’ve gotten lighter, and I can do a lot of things that I couldn’t before, like I can play sports better.”

Tears welled up in Alysha Newton-Cueto’s eyes as she talked about being teased for being overweight while growing up.

But she said things are looking up for her thanks to Bright Bodies. Her mother, Tiquanda Newton, said her daughter had done the program at age 10 and asked if she could do it again when her self-esteem was low last fall. She can take part at her age because she has cognitive and learning disabilities, Newton said.

The family’s eating better and doing the Zoom workouts together. Newton said she’s lost 14 pounds and Newton-Cueto has lost 13.

“It’s something that was missing in our family for a long time,’’ Newton said of Bright Bodies.

Cover Photo: Angel Gabriel Coronel, 10, of New Haven, has lost 12 pounds since joining the Bright Bodies program. He is heading into his third 12-week session. He has learned about healthy eating and enjoys the exercise program.

Different racial and ethnic groups in the U.S. look at health concerns in different ways. Those culturally specific responses may be beneficial, according to...

Research at the University of Arizona shows that 84 percent of advertisements during children’s Spanish language television shows are for junk food, NBCLatino reports....