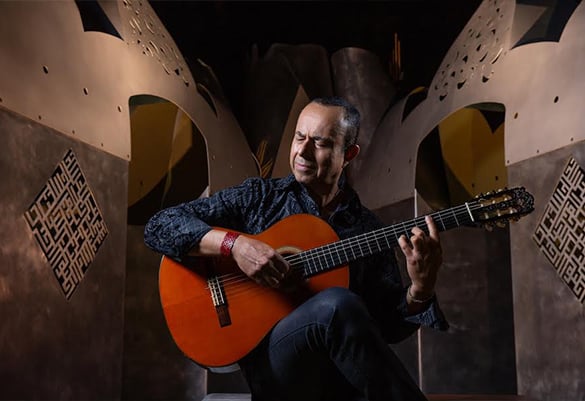 At 14-years old, Daniel Salazar, Jr. discovered Spanish classical guitar. He quickly fell in love. Today, Salazar holds both a bachelor’s and a master’s degree in music; he has studied guitar in Spain and performed in master classes with classic guitar maestros; he has established numerous musical programs; and, overall, has redefined Spanish classical guitar’s limits.

Romance De La Guitarra was first realized 10 years ago as a collaboration with the university as a way to reimagine the concert experience—something Salazar has aimed to do for much of his musical career.

On conceptualizing the idea, Salazar says: “The guitar is such a universal instrument, every culture can relate to the guitar, Spanish guitar, flamenco guitar … it has this very passionate side to the music, and I thought it’d be a perfect pick for Valentine’s Day. And, so we started the program with that in mind.”

“It is very interesting,” says Salazar. “I think when people think of Latin music, for some people anyway, the first thing that comes to mind is probably the most popular things you hear, like salsa or something like that. So, with my program, I have always tried to play music that people aren’t necessarily exposed to all the time, but is an important part of Latin and Spanish culture.”

Salazar says if he had to succinctly define what he plays, it would be: Spanish guitar with Latin enrolled rhythms. He notes that those who attend his concerts come from all walks of life and are not just Latino. He adds, “I think some of them are surprised by what they hear because they get to hear other things … they get some classical music, some traditional Latin music, some Spanish flamenco. And it’s all very moving, appealing, exciting sounds that people really enjoy, and they keep coming back.”

For Romance De La Guitarra, Salazar brought a number of elements into the mix. A flamenco dancer and singer joined the performance, which Salazar says is “a rare thing that you don’t hear, especially around here.” Salazar’s group also wove in songs by popular bands like the Gypsy Kings as well as incorporate more classical Spanish music that uses Spanish rhythms. The performance also included a premier of a video that Salazar shot while in Spain, a compilation of music he wrote and arranged (an arrangement of Spanish and Latin classics).

Salazar says he was excited about playing Romance De La Guitarra in Connecticut again. And, as though he were 14-years old again, just falling in love with the Spanish guitar, he says: “The guitar is such a beautiful instrument, the sound of the Spanish acoustic guitar is so unique. It’s perfect for this romantic theme.”

Creating and Performing To Bring People Together

By Doug Maine CTLatinoNews.com   Virtuoso Spanish classical guitarist, Daniel Salazar, Jr. has always been driven to create and perform, and when he has,...