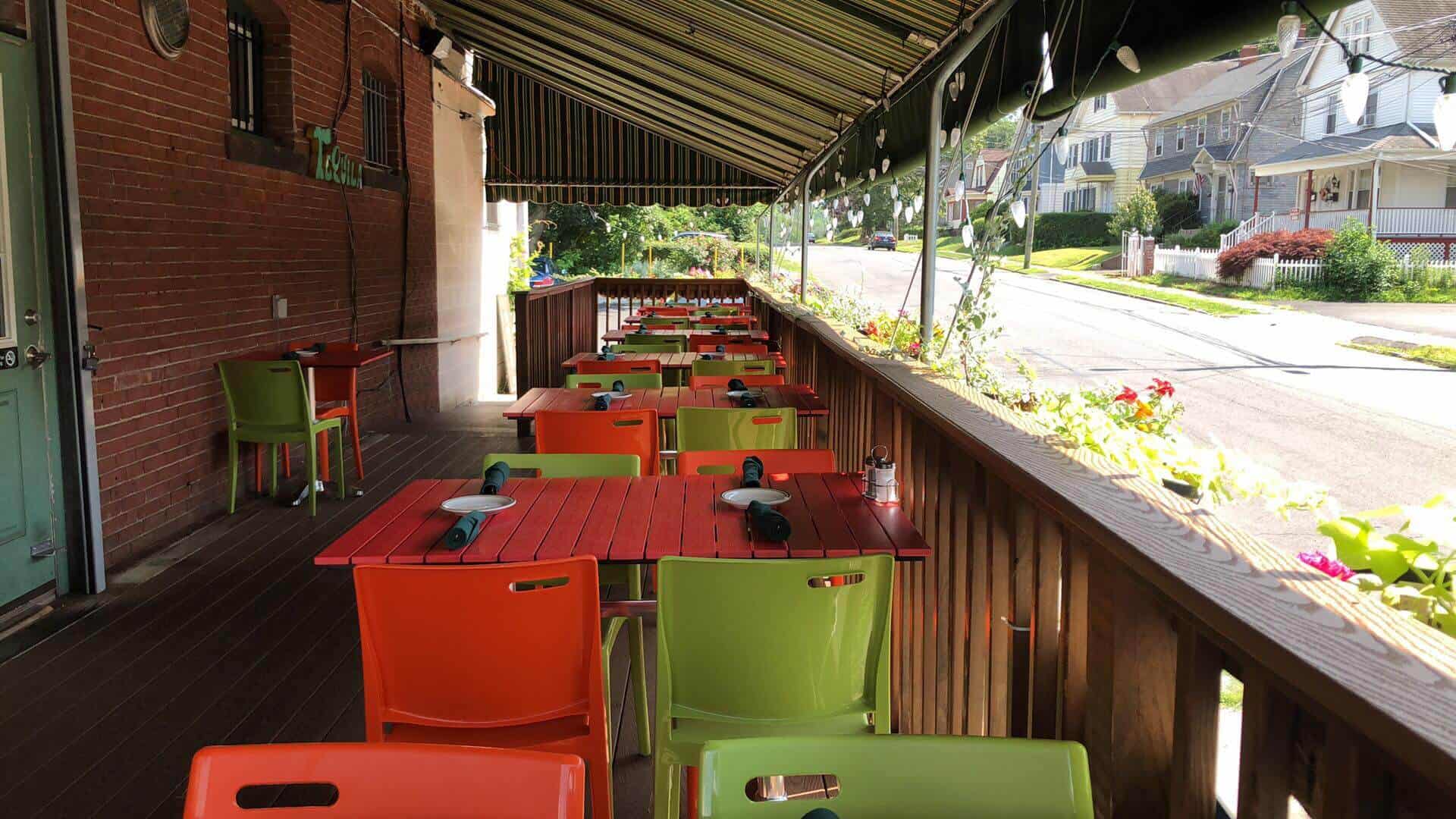 March 16th has come and gone, and Connecticut restaurants have had to dig deep to survive, relying on the entrepreneurial spirit the industry is built upon. On May 20th, restaurants were given a slice of hope, a sliver of light in the dark, hinting that we might finally be on the path to recovery.

After seeing Connecticut’s COVID-19 cases on the decline (declining 27 of the 28 days before making the decision to reopen and observing 1,700 hospitalizations go down to 900), state officials are allowing restaurants to open dining areas outdoors only and with several health guidelines. Some of these guidelines include masks for both restaurant workers and guests, gloves for workers, tables 6 feet apart, disposable menus, no physical contact, and condiments in single-serving packets.

When the choice was made to shut down restaurants (and other businesses) on March 16th, officials knew there would be a significant economic loss. A loss that is “uncontrollable and very necessary,” says Scott Dulch, executive director of Connecticut Restaurant Association. He also says he is hopeful that a reopening for inside seating will come quickly “as long as we do this part right, and our numbers continue to stay steady.”

One can’t help but acknowledge the stark, real numbers that are being produced health-wise as well as economically during this pandemic. As far as the economics for the restaurant industry goes, in Connecticut, there are 160,000 restaurant workers and 8,500 restaurants. The data shows 89,000 plus of those workers has either been furloughed or laid off since the start of the pandemic. While the restaurant industry in Connecticut did $8.9 billion in revenue last year, Dulch says $845 million was lost in the first month and a half (the first six weeks) of the shutdown. “And those numbers are real,” he adds. “They hit me in the face every day.”

While these numbers are genuine, so is the pandemic. This is not lost on Dulch. “Any loss of life is awful,” he says. “There is nothing that can take that away, and we understand that but also at the same time, we, unfortunately, know that there is not a vaccine on the horizon, so is there a way to [get restaurants back to business] safely and protect people? That is what we are trying to do.”

There is no denying the impact of this pandemic and its effect on everyone — and in various ways. While the loss of life is the most tragic of outcomes, many have struggled in other ways.

For many Latinos in the restaurant business, the challenges have been almost insurmountable. Others have been able to navigate through the changing tides and seem more hopeful. Making up 22.3 percent of the service industry (according to the U.S. Bureau of Labor), many Latinos found themselves without a job. Others took pay cuts or worked longer hours for less money. Some have worked for free to help a family member out. Their struggles have been palpable, but with the new outdoor seating arrangement, some are breathing a little easier.

Juan Rodriquez, owner, and manager at Puerto Vallarta Restaurant says, “Definitely everybody got affected. We have 7 locations, my brother runs 4, and I have 3. Danbury and Fairfield took the biggest hit, there we lost 80 percent of the sales. Fairfield being too close to N.Y. was one of the biggest issues. I have been blessed at this location in Newington where we have been running at about 40 percent what we are normally doing. Which is great. The first two weeks were very slow. I have 38 employees, only 8 have been given enough hours to stay on. We changed some waiters into painters. We started painting and taking things out, so that way I can keep them busy and do things we usually don’t do. But yes, it has been tough.”

Rodriquez also started giving out free non-alcoholic margaritas and says that helps with the turnout. Since the shutdown, Rodriguez also told CTLN he has given out 1,200 churros and 1,400 ice creams for free. He says this is the way he can thank the community for supporting them during this difficult time. His restaurant has also been a massive player in donating food to hospital workers throughout the pandemic.

Truly adapting to the situation, Rodriquez has also completely renovated his patio, which has 18 tables, installing an entertainment system and T.V.s, as well as building a new patio roof. “We are just hoping for the best and doing everything we can think of to stay ahead of the wave of change,” says Rodriquez. “But every day it seems new information is coming out, so we are just taking it one day at a time as well.”

Dulch agrees with Rodriquez’s perspective; one must adapt to survive essentially. Dulch says, “I hope that whatever these strict guidelines and controls are won’t be here forever, but I think that our industry is going to have to adapt and change immediately. This is a new reality that we are in right now, and you just have to try to survive this. [Restaurant] revenue streams might not look the same if they do 5 percent in to-go [orders] and 95 percent in indoor seating, and no outdoor seating that model isn’t going to keep you afloat and be a business model for at least the next 7 to 12 months. So now, restaurant owners are having to ask how do they create a take-out and curbside option that people are going to flock to because you have a great restaurant? You may have to change your menu a little bit, and what are you doing about outside? Is there an opportunity for you to use parking spaces, or whatever it might be, because guess what, you got five months at least in Connecticut of weather that can be outdoor dining. It isn’t December or January right now, so how do you find more revenue coming from that, and then hopefully, the indoor comes back sooner than later, and that is another stream. But I think those are the conversations restaurant owners are having or should be having. They’re going to have to reinvent to survive.”

At Coyote Flaco Restaurant in Hartford, that is exactly what they are doing. Owner and manager William Cabrera inform that they are waiting on the green light to use the parking lot (at the Mansfield location) as patio dining. Coyote Flaco is one of the lucky restaurants that has a patio that will be open now for outdoor dining. (Only 25 percent of restaurants in Connecticut have patios that can be used to reopen under the new criteria.)

Cabrera says, “It is great that we can now use the patio and bring some employees back to work. We laid off all employees once the shutdown occurred. We only had myself, my brother, my cousin and my uncle. So just the four of us have been running things. The staff got laid off because the demand was not there. We have hired back the majority of our staff now.”

On top of expanding into the parking lot, when they can, Cabrera’s team has added more tables to the patio as well as some umbrellas and purchased tents for continued outside expansion. “It has been challenging,” says Cabrera. “But we have had a lot of help from the community, and we got a loan. I think this is all necessary, though. Things could be better, but it could be worse.”

One restaurant that has not been so lucky is La Fonda Restaurant in Hartford. They do not have a patio, and they will not be opening for outdoor dining. However, they will continue to do to-go food, which has been shoddy at best. Lena Austullo, manager and daughter of the owner, says their experience has been bleak.

“Only two people are still employed,” she informs. “We had to lay off ten people at the very beginning, and it has only been me and one of the chefs. Honestly, it is really sad. What we use to make on the weekends we don’t even make half of that. Some days we don’t even get any orders. And now we have to spend more money [on PPE, disposable menus, single condiments, professional cleaners, and other sanitary arrangements]. And we haven’t received any help. We filled out an application, but we didn’t get any help.”

Both Coyote Flaco and Puerto Vallarta received loans to help them stay afloat. Sadly, La Fonda has yet to receive its Paycheck Protection Program loan — if they will receive it at all. Austullo says, “It is going to be really hard to recover from this. Because the bills don’t stop.”

She also brings up a scary thought: many Latinos may be undocumented and working in restaurants that are now without work and unable to receive unemployment. Much like her struggling restaurant that receives no relief, these people will be on their own. “They won’t have a choice but to be without money,” says Austullo, who is without money herself, as she has opted to work for free during this time to offer some relief to her family’s business. Perhaps, she admits, she didn’t have the right resources to guide her and her family to advocate for the loans.

La Fonda is still afloat, though, despite their hard luck. Other restaurants have entirely shut down and will not be reopening anytime soon, or maybe never again.

Rodriquez puts it in simple terms, and contributes a positive spin on things, saying, “This is a great country with a lot of benefits, but maybe it’s just me, but I think for a lot of Hispanics they are so proud, they don’t want to ask for unemployment or help unless they have to. And I think some will struggle because of this. But family is very important and that is the kind of support many Hispanics will rely on through this. But we all need to take care of each other like we are each other’s family. We need to take care of ourselves, even before all of this. This is not going to go away soon so we have to learn to live the way it is now. Just take it one day at a time. And maybe for Latinos, they are going to be enjoying life more. They have been working their whole life, maybe it is really a knock-knock, ‘you have to enjoy your life with your family.’ It is what it is, so we just have to make the best of it.”

Publisher’s Note: Sector rules in their entirety for Connecticut restaurants reopening can be found here.