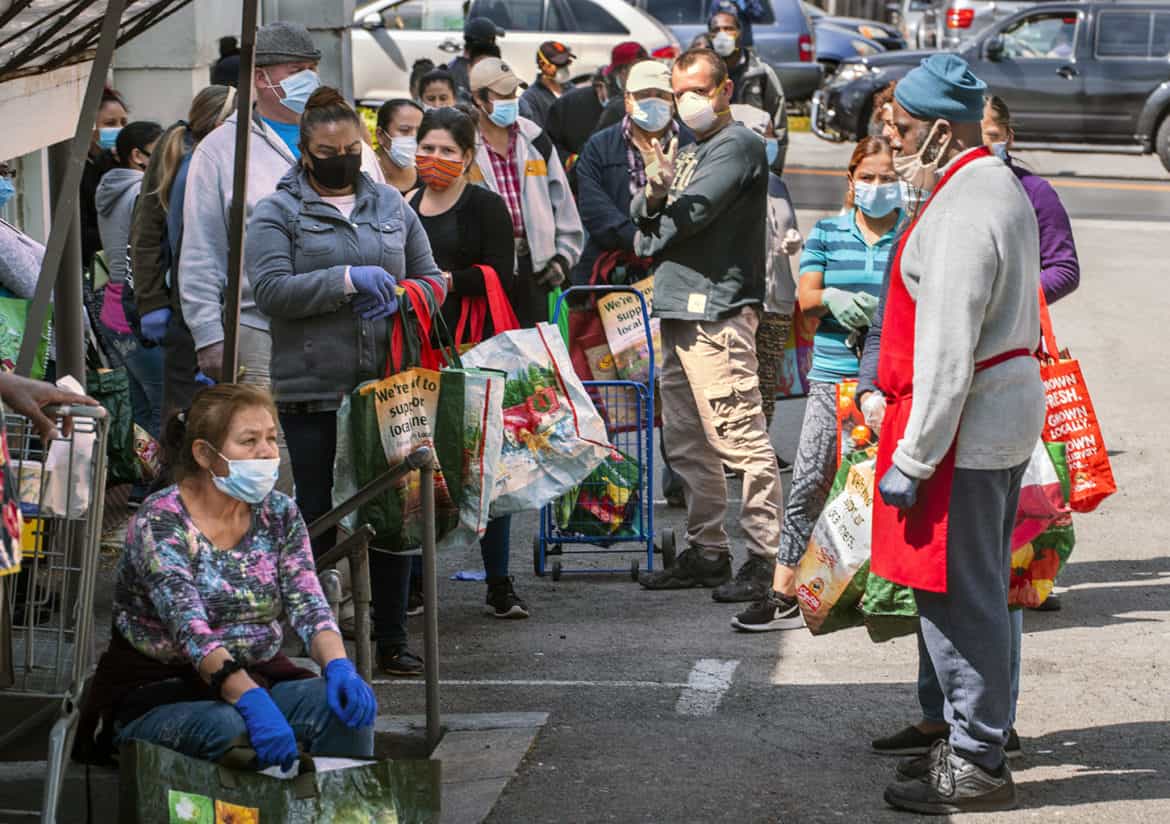 People wait outside of the 164 Wilson Food Pantry for their numbers to be called. The pantry is part of the Wilson Memorial Church of God in Christ. -Photo by Melanie C Stengel

Beyond the gleaming office towers overlooking I-95 in Stamford and the pleasure boats that frequent the city’s marinas, thousands of city residents are struggling with hunger, a situation worsened by the pandemic.

Severe food needs in Stamford, which has the most COVID-19 cases in Connecticut, reflect the state and national food emergency wrought by record unemployment. Consistent with the national experience, Latino and black residents, who comprise about 40% of the city’s population, are disproportionately contracting COVID-19 and losing low-wage work. Latinos comprise 26% (33,000) of Stamford’s population, blacks 14% (17,000).

The Brookings Institution has reported that more than one in five households nationally were food insecure by the end of April. The Connecticut Food Bank, which services 270,000 people in its region, projects that the pandemic will result in as many as 187,000 additional state residents becoming food insecure.

A 2018 DataHaven survey titled the Fairfield County Community Wellbeing Index found that food insecurity was experienced in Stamford by 17% of blacks, 13% of Latinos, and 9% of residents overall. The pandemic and resulting loss of jobs have heightened that food insecurity. Social services providers say the crisis illuminates ethnic and racial disparities in health and income that lead to food insecurity.

Many immigrants are undocumented and can’t get unemployment compensation, said Catalina Horak, executive director of an immigrant program called Building One Community, which offers educational and social programs. She says immigrants have lost jobs in restaurants, hotels, construction, landscaping, and as housekeepers and nannies without “the luxury of working from home.” According to U.S. Census Bureau estimates, immigrants comprise 34% of Stamford’s population of 129,775.

Building One Community has transformed into a temporary emergency agency with an onsite food pantry. It is also providing gift cards, Horak said. She gets about 100 calls daily from immigrants who are “very, very desperate,” she said.

Horak wondered if, after the pandemic, the Stamford community will “flip the switch and pretend nothing happened.” She said, “It has become more clear than ever that there are huge disparities in Stamford. Are we going to address them by giving money and food to the most vulnerable for a few months, or are we going to use this opportunity to understand the underlying issues and address them?”

“I think that’s what will define us,” Horak said.

‘We Make It Work’

Before the pandemic, more than 57% of Stamford public school children received subsidized school meals, said Associate Superintendent Olympia Della Flora. She predicts that number will rise based on increased unemployment and a statewide surge of applications for Supplemental Nutrition Assistance Program (SNAP) benefits.

The school system now gives Grab-and-Go meals to any Stamford families that have asked for them. Between March 13 and April 29, about 131,000 meals were distributed in multi-meal packages, she said.

Lynn McKee gets food for her 5-year-old grandson from Grab-and-Go and from Filling in the Blanks, a nonprofit that provides items like applesauce, cereal, and pasta. Disabled and unemployed, McKee receives $34 a month in SNAP benefits. She doesn’t complain. “I don’t want to be ungrateful,” she said, adding, “We make it work.”

Filling in the Blanks, which provides weekend meals to low-income children, added two-weekday distributions in Stamford because “parents really need the extra food,” said Tina Kramer, co-director. The organization is facing a potential loss of $500,000 in fundraising due to canceled events, she said.

Shirl Bond has stopped going to food pantries to supplement SNAP because she is afraid of contracting the virus. “There’s too many people out there,” Bond said. Her 11-year-old daughter gets Filling in the Blanks meals, which Bond said provides “extra food in the house when we run out.”

The myriad food programs in Stamford are scrambling for food and money due to skyrocketing demand, supply shortages, canceled fundraisers, and fewer volunteers as people stay home. Some organizations have added home delivery, established virtual fundraisers, and closed mobile pantries that are too small to maintain social distancing.

Person-to-Person, which operates food pantries and provides emergency financial help in seven communities, has seen monthly food costs rise from $15,000 to $32,000, said Nancy Coughlin, chief executive officer. She said the agency, which usually fed about 7,000 Stamford residents annually, now serves nearly 1,000 more. A recent virtual fundraiser brought in more than $400,000 with the help of a $200,000 matching grant from two people.

Kathleen Lombardo, executive director of the Food Bank of Lower Fairfield County, said she’s competing for groceries with other nonprofit agencies buying food. “If they didn’t take it, the food bank would have it” to distribute to them and other agencies, she said. First responders recently collected 7,000 pounds of food for her food bank.

The Connecticut Food Bank is buying from wholesalers now as well, said spokesman Paul Shipman. He said that from early March through the end of April, the food bank purchased 2.8 million pounds of food, compared to 2 million pounds all last year.

Cara Mitchell, food policy manager of United Way of Western Connecticut, explained that worry about running out of food is also a sign of food insecurity, a factor not addressed in the 2018 County Wellbeing Index.

“I hope that whatever we are able to rebuild after this virus will bring a more just food system,” she said, adding, “It’s hard to be optimistic right now with everything’s that’s going on.”

“I think everybody is concerned about what the next 12 to 18 months will look like and how we’re going to get through this,” Mitchell said.