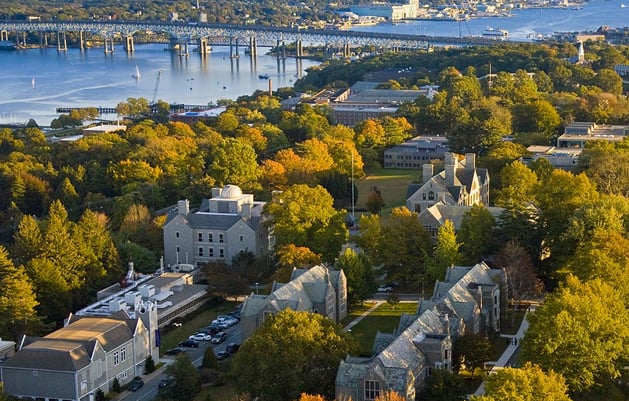 This story features the comments and perspectives  of two prominent Venezuelans in Connecticut: Henrique Salas-Römer, an exiled political leader, and Clodomiro Falcon, president of the Venezuelan Association of Connecticut.

Henrique Salas-Römer has been living near New Haven as an exile from his native Venezuela for more than four years ago, but his perspective of the turmoil in his homeland remains very much that of an insider.

The 82-year-old Salas-Römer is the senior member of one his nation’s most prominent political families and is well connected to the current political scene as founder of the Proyecto Venezuela party.

At the age of 32, the Yale University economics graduate was elected to the national congress and was governor of Carabobo State, a position that his son Henrique Fernando Salas Feo won for four non-consecutive terms from 1995 to 2012.

In 1998, the elder Salas-Romer was runner-up in the epochal 1998 presidential election, winning 40 percent of the votes in a six-man race that put Hugo Chavez and his “socialist revolution” at the controls of Venezuela.

Today, Salas-Römer, who runs a New Haven-based real estate development firm with his son Juan, views Venezuela as a “failed state.” And like many Venezuelans inside and outside their homeland,  shares the hope that President Nicolas Maduro’s dictatorship will come to end soon. However, he also suggests removing Chavez’s chosen successor is the ultimate solution.

“Maduro is not the problem,” Salas-Römer said. “He was put there by Cuba, and follows orders from Cuba, whose lifeline is Venezuelan oil, religiously sent by Maduro, despite Venezuela’s deep economic drama.”

Cuba has a large military presence and control much of what happens in his homeland, Salas-Römer said, and this includes the nation’s armed forces, public registry, the emission of passports and communications.

“Venezuela is a country militarily occupied by Cuba,” said Salas-Römer, adding that Cuba is a close ally of Russia, China and Iran.

Beyond the Cuban factor, Salas-Römer warns that Venezuela’s humanitarian crisis, where people have no food and many suffer and even die because of lack of medicine, may have wider repercussions

“Over three million, ten percent of the population, have fled, a number that, if nothing is done, will grow exponentially, endangering neighboring countries whose governments may implode,” he said.

Like Salas-Römer, Clodomiro Falcon came to the United States from Venezuela to attend a Connecticut university. but after earning a master’s degree in business administration at the University of Bridgeport he has stayed in Connecticut, currently resides in Trumbull and has become a management consultant for small businesses.

Falcon, who president of the Venezuelan Association of Connecticut (Asociación de Venezolanos in CT.), remains deeply concerned with that nation’s humanitarian and political crisis, his anxiety heightened because his parents and several brothers and sisters remain in his troubled homeland.

People not only lack food and medicine but what is available carries a huge price tag. Even basic necessities such as tooth paste and toilet paper are in short supply.

“It is very hard to see what is going on in Venezuela – it is a very difficult time,” Falcon said. He added, “Venezuela is in the midst of a humanitarian crisis over a political interest.”

The Venezuelans in the United States are collecting medicine and other items for people in Venezuela but getting these good there can be challenging with large shipments likely to be interdicted and seized by the government.

“We send medicine to relatives in Florida,” Falcon said, and they work with companies that can deliver these items to Venezuela.

The Venezuelan-born population in Connecticut is not large, estimated at about 4,000, and relatively small when compared to the influx of people over the last twenty years from other parts of Latin America including Mexico, Peru, Brazil, Ecuador and Guatemala.

However, the Venezuelans presence has increased during the ongoing crisis and while the Venezuelan Association does not maintain a membership list, Falcon has seen participation in the group’s cultural, social and sports activities have increased in the last few years. “We are having more people at every event,” he said, “We now will have 200 people under the same roof before it was 80 or 100.

Some of these activities are fundraisers and are part of a worldwide effort to help Venezuela and  bring government change.

The association’s membership, Falcon said, generally fall into two categories: Venezuelans like himself who have been in Connecticut more than twenty years and those who have arrived in the last five years, which corresponds to the growing hardships during the final years of Chavez’s life, he died March 5, 2013, and under Maduro.

Falcon said he is very disappointed with Chavez and Maduro’s leadership and that he does not know anyone who is in favor of the latter.

The choice now, he said, is between a “legitimate president and a dictator.” He added that 95 percent of the population is in favor of 35-year-old Juan Guaido, the opposition leader who as head of the National Assembly who has declared that last year’s election of Maduro as a “fraud” and that under the constitution he is now interim

The Trump administration and dozens of other nations have recognized Guaido as president, a move which Falcon and Venezuelans in Connecticut support.

Falcon also agrees with the tactics the U.S. government is using to convince Maduro to step down. These include economic pressure, sanctions and “cancelling trade with corrupt members of the regime,” he said.

Falcon said that the United States must work through its international relations. “The U.S. cannot do it alone,” he said.

As to an end game that will return democracy to Venezuela, Falcon and Salas-Römer see the process as complicated.

The “light at the end of the tunnel,” Falcon said is that Maduro is not supported, except for the military high command. He hopes there is a way to restore legitimate elections and remove Maduro without bloodshed.

For Salas-Römer, “Venezuela is a riddle reminiscent of the Labyrinth of Crete.”

The South American nation is “home to the Colombian narco-guerrilla, the Lebanese Hezbollah, the Iranian Islamic Revolutionary Guard,” Salas-Römer said.

“Then government has ‘colectivos,’ gangs in motorcycles, armed by government, and ready to take action at any time,” Salas-Römer said. “Then there are  criminals of all sorts who receive instructions through cell phones from headquarters set up in the country’s largest prisons.”

In addition, the Venezuelan exile said, “the top Venezuelan military officers are controlled by Cuban intelligence so they do not defect, and quite a few are involved in the drug trade or other shady businesses.

Salas-Römer added, “Each group is on its own, but has a piece of the action and far more to lose by leaving. So they stay together and they stay.”

“The U.S. has let this drama go on too far, and is partly responsible by deed and omission,” said Salas-Römer.

“Can the US allow this to go on?” Salas-Römer asks. The answer, he said is no, but “acting has a price, and, though Venezuela is not Iraq, I presume your president justifiably frets a repeat of the Iraq fiasco.

“Washington hopes, I believe,” he said, “that defections (from the military command” will ensue. Let’s hope this time it works. But then again, maybe Cuba and not Venezuela is the target, and maybe, just maybe that is where U.S. policy is aiming, but by trying to shut off oil supply.

“Right now, I understand the U.S. is exerting maximum economic pressure,” he said. “Gasoline supply is said  to be shut off soon. If so the country will come to a sudden halt. Hunger will grow, also deaths, but a price has to be paid.”

Moreover, should Maduro leave, and even if clean elections are held, Salas Romer said, “Venezuela will not be easy country to run. Not easy at all.”