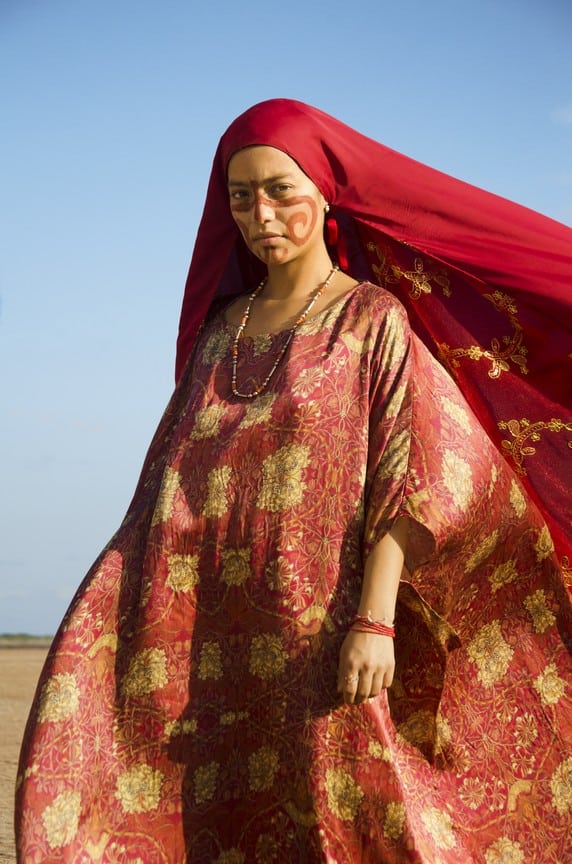 As I sat watching “Birds of Passage” (Pajaros de Verano) a visually stunning and engrossing film, I realized how little I know about the lives of most of the indigenous people in Latin America. Aside from the Mayas and Aztecs in Mexico; Incas in Peru, and the many groups in Panama, where I grew up, my education never extended to other indigenous cultures. And, it is perhaps because of my ignorance that this film has had such a powerful impact on me as a viewer. Sadly, it has taken this film to teach me about the Wayuu tribe of North East Colombia and Northern Venezuela. Their language is spoken by thousands of people.

It is not easy to define a film like “Birds of Passage” in a few words.  It is a story of honor, greed, friendship, romantic love, narco-trafficking, revenge and more. It is about a people living within an ancient tradition that has survived centuries of colonization and yet managed to maintain their cultural identity.

Directed by Colombian filmmakers Ciro Guerra and Cristina Gallego, the film was invited to open the 50th edition of the Director’s Fortnight section at the 2018 Cannes Film Festival and was received to great acclaim. It was also the Colombian entry for the Best Foreign Language Film category at the Oscars. Since its release, “Birds of Passage” has received eleven awards in International Film Festivals in cities like Cairo, London, Havana, Lima and others, as well as having been nominated twenty-two times in the categories of best foreign language film, and best director in many other international festivals.

In an interview in “IndiWire” in January, 2019, Cristina Gallego explained that this film took shape when listening to stories told by Wayuu tribe members while working on another film. It took the collaborators ten years to write and make the film. While professional actors portray the main roles, Wayuu tribe members comprise 30 percent of the production.

The film opens with beautiful Zaida (Natalia Reyes) as she emerges from a year-long confinement in a dark hut in preparation for womanhood. Dressed in a striking red and gold gown, arms stretched like the wings of a bird, she is ready to dance the “yonna” in a ceremony which marks her transformation. It is during the dance that Raphayet (Jose Acosta)who belongs to another family, falls in love with her.  Ursula (Carminia Martinez), Zaida’s mother, a member of the Pushaina family and the tribe’s matriarch, sets an unrealistic dowry of an exorbitant number of cows, goats, mules and special necklaces.  It is this dowry that will set Raphayet on the path from small-time trader of coffee, to narco-trafficker. Obtaining the money for the dowry is the foundation on which the family and tribe’s wealth and tragedy grows.

Families communicate with one another via the “word messenger.” Peregrino (Jose Vicente Cote), is the messenger for the Pushaina family. He is the repository of their traditions and a highly respected member of the tribe. An injury to him will result in a war between the groups.

The movie develops from late 1960s to 1980s as a fascinating historical epic. Divided into five Cantos: I Wild Grass/Hierba Salvaje, 1968;II The Graves/Las Tumbas, 1971; III Prosperity/Bonanza, 1979; IV War/Guerra; and V Limbo. Each section with its own title poetically illuminating the emotionally gripping progression and violent transformation of the characters who once belonged to a peaceful agricultural Tribe.

In this article:Birds of Passage, Hispanics in movies, movie review, Pajaros de Verano