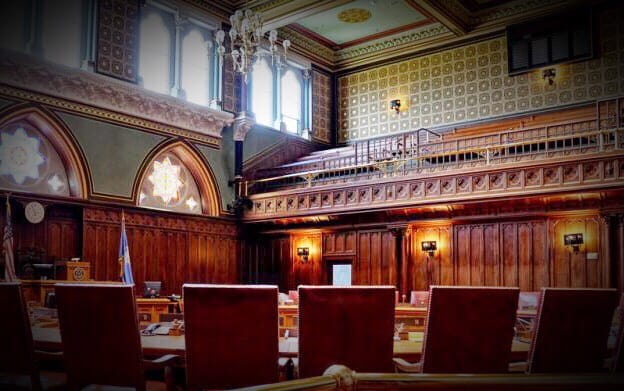 The Connecticut Senate voted to pass a bill that would further restrict how police and court personnel can work with federal Immigration and Customs Enforcement (ICE) to detain undocumented immigrants, according to WNPR.

The bill expands the Trust Act which was passed six years ago and prohibited the detention of undocumented immigrants in the absence of a threat to public safety, outstanding arrest warrant or final order of deportation, according to the WNPR article.  The Trust Act was passed in response to then-President Barack Obama’s immigration enforcement policies.

The new bill is in response to the even more aggressive immigration policies of President Donald Trump.

Connecticut is one of nine states that have laws limiting cooperation of local courts and law enforcement with ICE, while no states have passed anti-sanctuary laws, according to the Pew Charitable Trusts.

Not surprisingly, the bill passed mostly along party lines, 20-15, on May 15 following a nearly eight-hour debate. Sen. Joan Hartley, D-Waterbury was the sole Democrat to vote with all 14 Republicans against the measure. One Democratic Senator was absent due to a family emergency. Democrats hold the majority in the Senate, 22-14.

“It is a very scary time for a number of people in this country. We’re seeing an unprecedented attack on immigrants in this country,” said Senate Majority Leader Bob Duff, D-Norwalk. “Our state is better than that.”

The bill would prohibit the detention of anyone on a civil detainer lodged by ICE, unless accompanied by a warrant signed by a state or federal judge, the WPNR article said.

It would also limit the circumstances under which law enforcement officers can disclose confidential information to a federal immigration authority, and it no longer would allow local authorities to detain undocumented immigrants on the basis of being a threat to public safety.

Senate Minority Leader Len Fasano, R-North Haven, said elements of the legislation would appropriately strengthen the due process rights of immigrants facing civil detainer orders issued by ICE, and many Republicans would have supported a more tightly focused bill.

“You cannot hold somebody against their will for a civil matter,” Fasano said. But added, “It just goes too far. It is so far reaching.”

Democrats said the bill was necessary to underscore that immigrants, regardless of their legal status, can safely report crimes and otherwise cooperate with local police and trust that they will not be turned over to ICE.

“The ability to do local policing is impacted when immigrant communities or perceived immigrant communities would actually look at them as federal ICE agents or as extensions of those, and that restricts their ability to be able to take care of the local issues, whether there are criminal activities in the community, whether domestic abuse or human trafficking,” said Sen. Saud Anwar, D-South Windsor.

For Sen. Gary Winfield, D-New Haven, a lead sponsor and co-chair of the Judiciary Committee, said preserving immigrants’ trust in the police was the reason for his support of the new bill and the original Trust Act of 2013.

“While we might say this particular community feels afraid to interact with the police, the crimes that happen in those communities will not always be limited to those communities,” Winfield said.

Republicans, however, said the new bill goes further, hampering the ability of local law enforcement to detain potentially dangerous immigrants — or to even truthfully answer when ICE inquiries about an immigrant who may be in police custody.

“I believe the title of this bill is a misnomer. I don’t believe this is a Trust Act anymore,” said Sen. George Logan, R-Ansonia, and the son of Guatemalan immigrants. “This bill should be titled, ‘Connecticut: Sanctuary State.’”

A series of amendments by Republicans to narrow the bill failed along party-line votes.

Citing research by an immigration clinic at the Yale Law School, the Connecticut Immigration Rights Alliance complained in March that some judicial marshals, who provide security at state courthouses and lock-ups, enforced civil immigration detainers in possible violation of the 2013 law.

Bill Sarno/CTLatinoNews.com As Willimantic’s new police chief Roberto Rosado sees community policing as a priority and his biggest challenge. One reason that Rosado,...

Fees at U.S. Borders Could Become a Reality

Travelling to and from Mexico may start costing more than just gas money. The Department of Homeland Security could start charging a fee to...