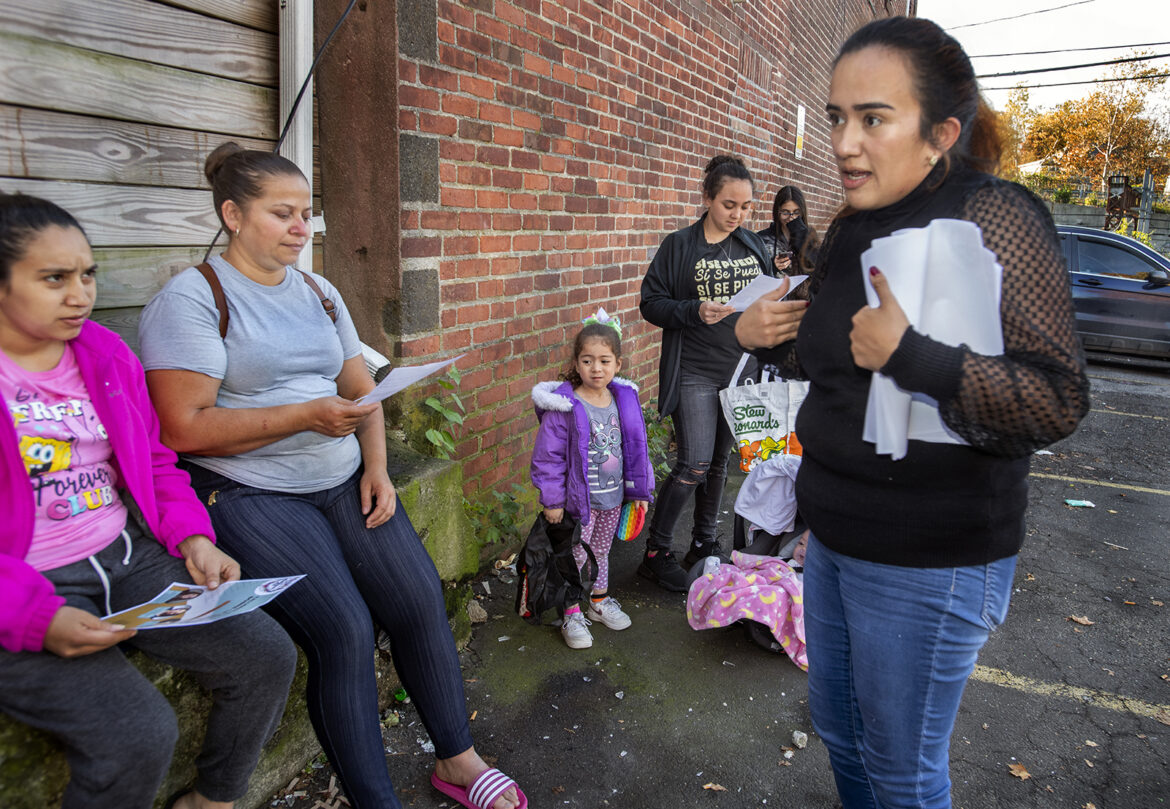 Laura Garcia, at right, speaks to local women and passes out leaflets at a laundromat parking lot on Ely Avenue, Norwalk. She lost her baby and was in danger of losing her own life. Garcia believes that her concerns were ignored, in part, because she is an undocumented immigrant. Now, she advocates for better reproductive care for women in marginalized communities. Melanie Stengel Photo.

When Laura Garcia was pregnant with her third child, a boy she named Matias, she had symptoms that made her uneasy. Her nails turned purple, her feet were swollen and she was vomiting. Undocumented and uninsured, she sought care in a community clinic.

“They told me it’s normal,” said Garcia of Norwalk.

But one day in her 39th week of pregnancy, as she returned home from work, she could no longer feel the baby moving. She asked her husband to take her to the hospital.

“And when I get there, they told me, ‘I’m sorry, but your son has no heartbeat.’”

It was confirmation of Garcia’s worst fear. Now, she faced delivering a stillborn child. She pushed for four hours, but she began to weaken, and doctors told her husband they were fearful for her life. Then, finally, Matias was delivered by cesarean section. The experience left her devastated and angry that her concerns had been ignored.

“I have many symptoms. I told the doctors. I explained them. I complained. They never listened to me; my baby died, and I almost died,” she said.

She believes some of that lack of care was because she is an undocumented immigrant from Guatemala.

The loss of her son left her determined to act so that other women in her situation might not suffer the same way. Garcia began a partnership with providers and other undocumented women to provide educational workshops on reproductive rights and accessing quality health care during pregnancy and childbirth.

“The situation that happened to me showed me I need to speak up,” she said.

At a Zoom workshop on a Sunday night in November, Dr. Daisy León-Martínez let participants know they could have their video on or off. “Remember, this event is a conversation,” she said in Spanish. “It is an opportunity for all of us to learn from each other. So, I invite you to put questions in the chat if you like, or you can also talk in person.”

León-Martínez, who did her OB-GYN residency and then a fellowship in maternal-fetal medicine at Yale University, ran down the list of topics for the evening: fertility, infertility treatment and birth control.

After her slide presentation, there was no shortage of questions, from birth control and side effects to menopause. One woman said that in her home country, a husband’s consent is necessary to obtain birth control; could the doctor clarify if this is the case here? Another wanted to know at what age she should talk to her daughter about birth control.

León-Martínez is now based in California, where she’s moved to be part of the faculty at the Department of Obstetrics and Gynecology at the University of California San Francisco. However, she still makes time for these Connecticut events on Zoom.

“Interspersed in every session, there’s usually some message about advocacy and patient rights,” she said. “There is a lot about reproductive care that is in the control of the individual, and it should be that way.”

A little later in the session, another woman spoke up. She explained that she was 26 weeks pregnant and frequently passed blood in her urine. She had been told she should see a specialist, but despite her best efforts, she couldn’t get an appointment for another month.

León-Martínez expressed concern. “Send your information by private message,” she said. “Tomorrow, we’ll see if we can make an appointment for you at another clinic.”

“A lot of times things will come up like today where we have someone who has been experiencing warning symptoms, and she hasn’t been able to find an appointment.”

“And so, we end up trying to work backward and talk to different providers to find her the help that she needs,” she said.

Vergara first met Garcia in November of 2020, not long after Garcia had lost her baby.

Garcia had traveled to New Haven for care at the HAVEN free clinic, a primary care facility run by Yale Medical School students where Vergara was the director at the time.

“She ended up needing hospitalization because of postpartum symptoms,” Vergara said. “And so that’s where things began. We talked in the emergency room while we were waiting for her to be attended to, and she shared with me her vision for wanting to start some sort of workshop for women who just don’t have the same access to health services and reproductive services.”

The first workshop convened in March 2021, just a few months after Garcia’s loss.

“Which speaks to really her commitment to this cause,” said León-Martínez, “and to her ability to turn something so negative into something fruitful for her community.”

“If the change is going to come in a way that is productive, it needs to come from the community that is affected,” she said. “I really commend the people who are doing all of the legwork on their own time—when they’re working two jobs and going to school in the evenings and balancing childcare—because they believe in their community and in the value that they hold.”

Estimates derived from census bureau data put Connecticut’s undocumented population at a total of around 113,000 of whom as many as 43,000 may be women of child-bearing age.

Nuñez del Prado, Esquivel and Garcia hosted focus groups to find out what women in the undocumented community wanted to hear. They also publicize the gatherings on social media and in person, passing out flyers along with food and other aid.

“Our organization is trying to give a voice to this community and advocate for more services—breast exams, for example, pap smears,” Esquivel said in Spanish. “When I tried to get these kinds of services, they did an assessment of my income and told me that my estimated cost for the care would be around $700. I did not have that much money.”

She says even one-time fees for appointments can add up to an insurmountable obstacle.

“Even if it’s a minimum payment of $30 or $40, they need that money for food and rent. And so, it’s not something that they can pay for—a medical visit, let alone multiple medical visits.”

But beyond the financial cost, there are other issues, said Nuñez del Prado. She acts as the community education lead for the initiative and runs sexuality and gender identity workshops as part of the series.

“Language is one of the primary barriers,” she said. “But also, not knowing how to navigate the system that is very consumerist in nature and views patients as clients. And so, there’s a sort of depersonalization towards the patient and their care.”

For instance, she said, if patients don’t have insurance, they’re offered fewer options for their care. The patients don’t know their rights and struggle to advocate for themselves.

León-Martínez said that when she was practicing in Connecticut, she saw many gaps in the health care safety net firsthand.

“The health care system is currently not built to be accessed by all people equally,” she said. “I spent a big chunk of my day trying to coordinate care personally for patients because I was aware that there were barriers that they were not going to be able to surpass. I spent probably more time doing that than actually counseling patients.”

That could mean coordinating with a social worker to get someone a taxi voucher so they can visit an appropriate specialist. It could mean helping someone who is illiterate to fill out application forms for financial assistance. León-Martínez said there were many times when she had to come in on her day off because she was the only Spanish-speaking provider.

The undocumented community won important health care advances in recent years. Garcia, Nuñez del Prado and Esquivel have all testified before the legislature on bills that affect their community. The biggest win came with the passage of a measure that, as of April 1, 2022, made undocumented women eligible for prenatal care and, as of April 2023, will provide one year of postpartum coverage under Medicaid.

León-Martínez says the changes in Connecticut will result in improvements for many, including those who need additional care after pregnancy.

Garcia said that while insurance coverage is a welcome step forward in many instances, there still can be disconnects.

“I’ve been calling for one woman who’s pregnant and asking for an OB-GYN for her, but they say they don’t have any more space for people with HUSKY,” she said.

Garcia and the others continue advocating for change at the legislature and are working to educate their community.

Ask what solution she’s seeking, and she has a ready answer.

“In my dreams, it’s free health care for everyone, but I believe something impossible, right?” Garcia said with a laugh.

Nuñez del Prado responded. “I don’t think there are any impossibilities,” she said, “just longer roads towards progress.”