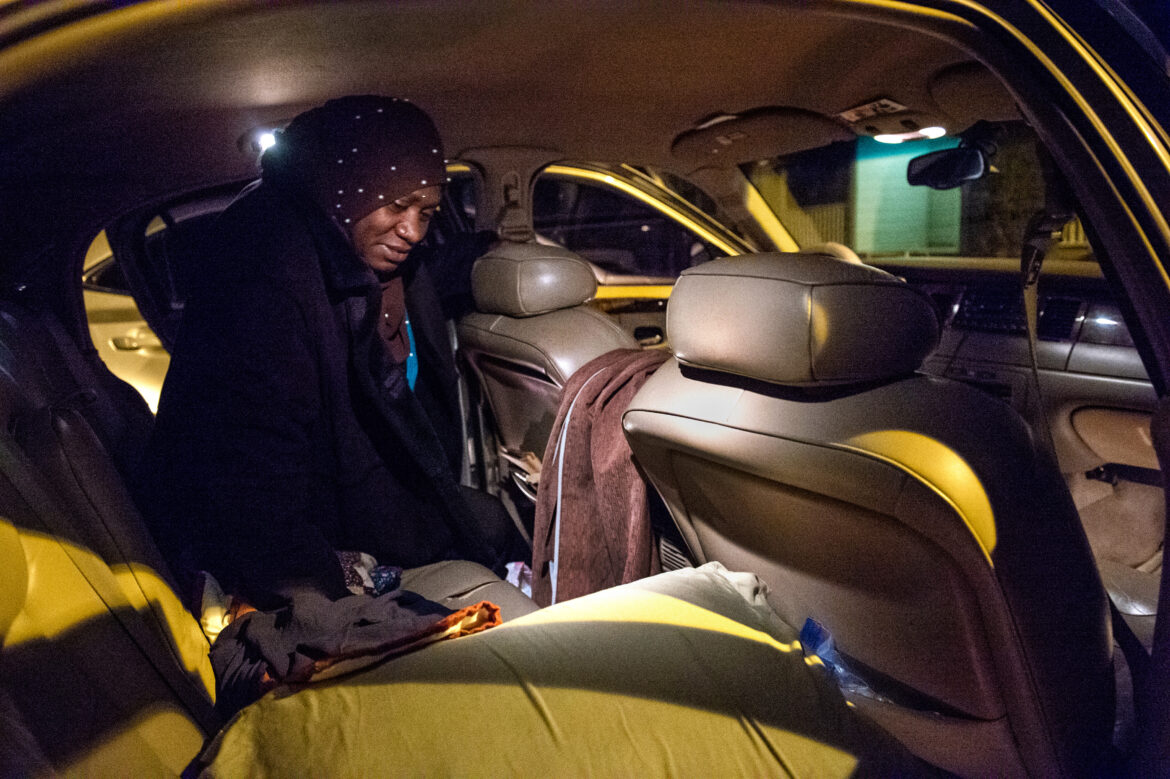 Dilleener Jordan prepares to bed down in her car in the parking lot of a friend’s apartment building in West Haven for the night, April 4, 2022. Jordan, a home health care worker who works four days a week with West Haven client Tracy Lamb, doesn’t make enough money to afford an apartment. She sometimes sleeps at Lamb’s apartment in a reclining chair but can’t do that every night. Photo by Cloe Poisson

Dilliner Jordan works 62 hours a week taking care of two people who are too medically fragile to take care of themselves.

But she has no health insurance and often sleeps in her car because she can’t afford rent and a security deposit, even though she has been saving for months. She is fearful of staying at a shelter, which she believes will increase her chances of contracting COVID-19 for a second time.

“It does bother me,” the 63-year-old Brooklyn, N.Y., native said. “It bothers me a lot. I don’t understand how I could work two jobs and still can’t afford an apartment. I either make too much money for help or not enough.”

At 61, Lucía Nunez, who also works as a personal care assistant, commonly known as a home care worker, is in the same position. Nunez, of East Hartford, works 70 hours a week, taking care of three individuals who need help with the daily activities of life, including bathing and meals. Still, she hasn’t had a mammogram in four years.

“I can’t remember the last time I went to the doctor for a regular visit,” said Nunez, who also has no health insurance.

They are mostly women—predominantly women of color—with no health care benefits, no paid time off, no paid sick days and no path to retirement even as the pandemic has worn on into a third year, said Diedre Murch, director of home care for the New England Heathcare Employees Union, SEIU District 1199.

“We are unearthing more and more stories like Dilliner’s and Lucía’s,” Murch said. “The pandemic was like pouring gasoline on the fire that was already burning.”

The workers can’t legally strike to get better pay and benefits because the state has no backup system to take care of their clients, Murch said. The union, DSS and DDS have been in talks for months, even as federal pandemic relief for community care was made available. After a meeting with Gov. Ned Lamont last week, the union is hopeful that a new contract is coming, Murch said, but an agreement has not been reached.

Nunez works Monday through Friday from 9:30 a.m. to 2:30 p.m. and 3 to 9 p.m. for two people and then every other weekend taking care of a third person. “I’m always working more than 70 hours a week, so I can survive, pay my bills and put food on the table,” she said.

She gets no benefits other than what she calls “holy day pay,” she said.

“If you work on the Fourth of July—that’s a holy day—you get paid time and a half. If you don’t work, you don’t get paid because we have no paid holidays unless we work.”

She only took a few days off when one of her clients contracted COVID-19 because she couldn’t afford to stop working. Her boyfriend puts gas in her car so she can use that money for food, she said. “Everything is more expensive,” she said.

Jordan works Monday through Thursday from 6 a.m. to 4 p.m. for Tracy Lamb, a 52-year-old West Haven resident with multiple sclerosis who is bedridden and needs help with bathing, dressing and chores around the house.

“She makes me happy every time,” Lamb said. “When she goes away, I’m miserable.

“We have a very good relationship. She bathes me, she leaves the room spotless, she cooks for me, she’ll clean up the house. She never stops. She’s like the Energizer battery.”

Sometimes the two watch television or movies together while Jordan folds the laundry. Lamb said Jordan will go to the store for her on her day off if she needs something. “She always goes above and beyond for me,” Lamb said.

Jordan also works 10 hours on Fridays and 12 hours on Saturdays taking care of a second client on oxygen.

Jordan will sometimes stay overnight at Lamb’s home if it’s cold out. On the other nights, she’ll sleep in her car, she said. She cooks for herself when she cooks for her clients, leaving foods that need to remain cold in their refrigerator.

“I never hide my situation from them,” Jordan said. “When I cook for them, I cook for myself.” DILLINER JORDAN MAKES LUNCH FOR TRACY LAMB IN THE KITCHEN.

Jordan said she was raised by a mother who believed that people should help their older neighbors or people in need. “I think that’s why I went into this,” Jordan said.

“My mom would send us to go help people. Even though I work six days a week, I spend Sunday going to see a lady who has nobody. I talk to her. We were the help for the elderly when I was a kid.”

She worked for a nursing home in 1987 but found that the job didn’t provide enough time to take care of people the way she felt was necessary, she said. “You need to make sure they are clean. You want to make them happy,” Jordan said. “There were so many residents you couldn’t give them the attention they needed. When I’m doing private duty, I’m able to do that for every one of my clients.”

After working in home care for nearly 30 years, she had moved to South Carolina before the start of the pandemic to spend time with her son and his family, she said. She was able to work less because she lived with his family and was enjoying life, until tragedy struck.

Her son went to the store one day and never returned, she said. He had been shot and killed by the store manager who mistakenly believed he was trying to rob the place, she said. “It was a shock. He just never came back from the store,” Jordan said. “It was very traumatic. He left nine kids. You come to the point where you can’t feel. I was in trauma.”

She sought the help of a therapist through telehealth and then came back to Connecticut to escape the memories of their time together, she said. “I couldn’t stay. I kept seeing him everywhere,” she said.

Since then, she’s been working with Lamb and her other client while trying to avoid catching COVID-19 for a second time. Her first bout in November 2021 left her with lung problems and fatigue, she said. She lost two weeks’ pay while quarantining because, by that point, federal sick time pay for home care workers impacted by COVID-19 had ended.

Jordan said she makes it a point to tell her clients that they still make life worth living even if they are bedridden or have physical challenges. Some days she tries to motivate them even as she’s exhausted from the workload, she said.

70-Hour Work Weeks, Sleeping In A Car: Personal Care Assistants Struggle To Care For Themselves was first published on Connecticut Health I-Team.

All photos by Cloe Poisson.