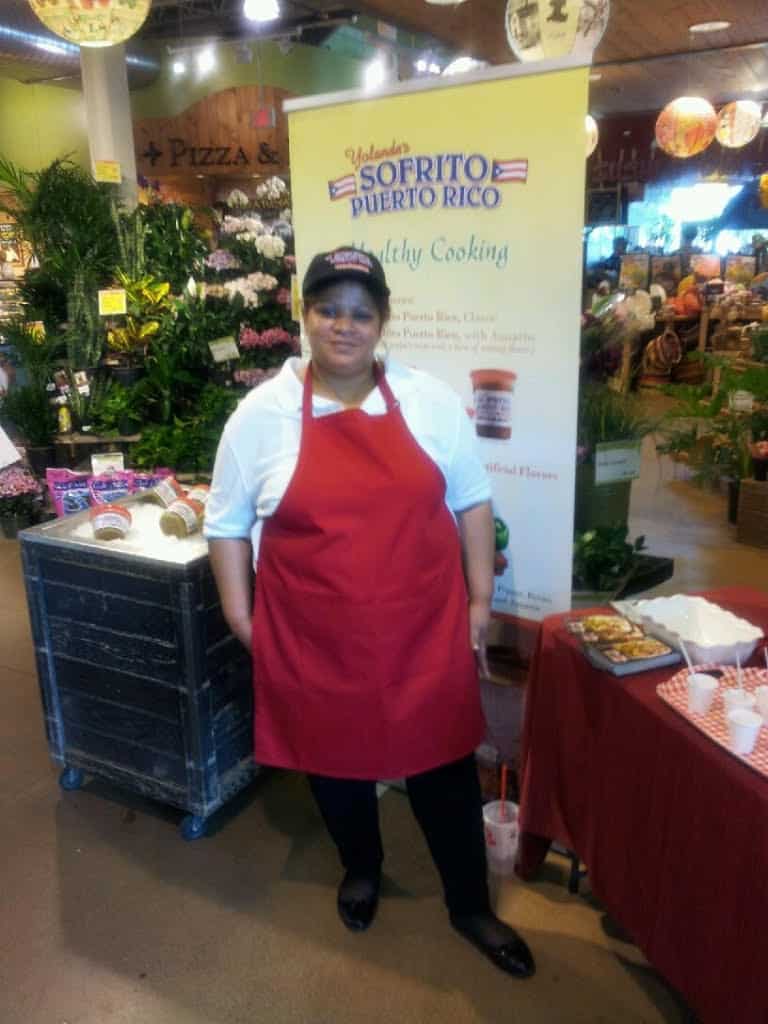 From his mother, Yolanda Valdes, a Hartford native with Puerto Rican roots, Feliciano inherited a “secret recipe” for the Hispanic cooking staple, as well as her experience in managing a sofrito company.

Moreover, her spicy eleven-ingredient version of sofrito already was known to many Hispanic cooks in southern New England.

Feliciano’s mother also contributed to the name of the company. She passed away recently and her son says that preserving her legacy has been his biggest motivation.

Among the items, Feliciano brought to the table was an entrepreneurial drive to take Yolanda’s to new heights and to do it right.

But what Feliciano acknowledged he needed to stir the pot for his project was guidance through the maze of financial, accounting, licensing and management challenges that can bedevil a small business.

This is where International Hartford enters the story.

Art Feltman, a retired attorney, launched the nonprofit organization about five years ago to provide free business education and consultation services to migrants, refugees and other minority residents in the Hartford area. The program’s objective is to create jobs through support for locally owned businesses and for entrepreneurship.

In its five years, International Hartford has helped at least 80 small businesses, many receiving grants or loans from nonpublic sources. In addition to serving Latinos such as Feliciano, Feltman has worked with West Indians, Africans and Asians.

“Richie approached us after we were founded four years ago,” Feltman said

From its offices in Hartford’s ethnically diverse Parkville section, International Hartford reaches out to provide its clients with ongoing guidance and support for all aspects of operating a business.

These services include help with business planning, financial literacy, accounting, and marketing skills. The organization also teaches participants how to access capital from banks and nonprofit sources and how to address legal issues.

“Our clients are usually retail businesses and restaurants,” Feltman said.

Feliciano said International Hartford provided guidance on management practices, how to develop a business plan and to understand analytics and how to raise capital, especially the loan he needed to remodel the site he chose for his business.

Feltman helped Feliciano negotiate a lease on an unused warehouse on Brown Street as a  home for Yolanda’s Products.

Feliciano said a friend from his music work pointed to him to the spacious building which had been used to store pasta and sauces. When he saw the building had a walk-in cooler he was sold.

International Hartford is an important asset in Hartford where Feliciano said a large Puerto Rican and foreign-born population can use guidance with lending services and other aspects of operating a business. “It is a great organization,” he said.

International Hartford operates mobile food courts at lunchtime from mid-May to mid-October outside Hartford Hospital on Wednesdays and on Thursdays at the Old Statehouse, the site for weekly concerts.

The genesis of Yolanda’s Products began in the kitchen of Feliciano’s mother who learned from her mother and grandmother how to make sofrito.

Valdes decided to exercise her entrepreneurial spirit and her recipe around 2009 and launched Sofrito Puerto Rico at an East Hartford site in collaboration with Cuban-American Osvaldo Torres. Their sofrito gained popularity and was distributed to 150 stores and supermarkets in Connecticut, Massachusetts, and Rhode Island.

However, when Feliciano’s mother was dying a few years ago, she moved to Florida and asked “Richie” to reorganize the sofrito company. “I wanted to keep the business going,” said Feliciano.

The reinvigorated enterprise was originally a mother-son collaboration with Valdes providing some management advice. The two also worked together to refine the sofrito recipe. The goal was was to give the sauce base “more kick,” he said while stressing the use of natural ingredients such as peppers, onions, and aromatics.

Yolanda’s produces two styles of sofrito. One is the traditional green variety and the other has a red tint which Feliciano said is derived from annatto seeds.

As a business manager, Feliciano said his focus has been on building distribution routes and the 32-year-old has been staying away from marketing. “I don’t want to create over-demand,” he said, a problem which plagued his mother’s business which was sold in over 150 stores.

Currently, Yolanda’s, which has four employees including family members, is sold in 30 stores, including CTown Supermarkets, El Mercado on Park Street in Hartford and several bodegas.

Going forward, Feliciano wants  set up a website and to further popularize his brand with the Latino community and he is thinking of expanding into different seasonings such as adobo and other organics.

Feliciano is determined to become a successful entrepreneur even if this means maintaining an exhausting work schedule. “I get about two hours sleep a night,” he said.” He also relies on expresso.