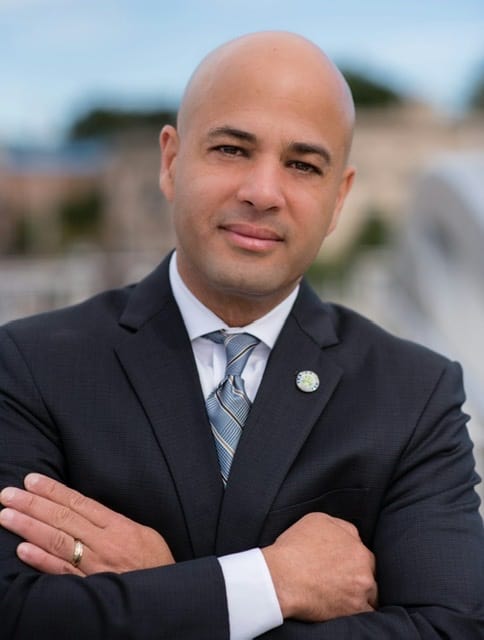 Miguel Castro’s year-long court battle has ended in victory. He states that this was not just a victory for him but for the whole community. Furthermore, he says his experience is indicative of a broken system, one which he aims to fix through legislation. So while he has won his case in court, he will continue to fight for the immigration community in office.

For those of you who are not abreast with the Connecticut Hispanic Democratic Caucus’s chairman’s case, his battle began last December in the sallyport of the Meriden Superior Court where he was involved with an immigration protest. During the event, the 15- and 17-year-old children of a Mexican citizen being released from custody and facing a deportation threat were distraught. Castro’s attempt to aid the grieving girls turned into his own arrest, where he was charged with assaulting two judicial marshals and inciting a riot.

On Friday, Nov. 15, the prosecutor dropped all criminal charges.

A huge piece of evidence that exonerated Castro was a video of the 3-to-5 second altercation with judicial marshals. While Castro did, in fact, make contact with the marshals, the video revealed that the events did not line-up with the story told in the police report. In the police report, one of the marshals reported that Castro struck him causing him to spin around 180 degrees. However, this never occurred.

What did occur was a 3-to-5 second altercation where Castro was taken down by the marshals and handcuffed. This discrepancy and Castro’s outstanding citizenship (no record and community involvement) led to the dismissal.

Castro and his attorney, Robert Burke, released the video they obtained of the incident that they say exonerates Castro to Fox 61:

If the charges had not been dropped, Castro was looking at assault on public safety personnel, which are Class C felonies, and if convicted this would mean he would have lost his electoral rights, and would not be able to continue to serve on the council until regaining voting rights (as per state statute).

After court on Friday, Nov. 15, Castro addressed the public, in which he stated the court marshals intentionally lied in their statements given to state police. Also, as part of his annulment, Castro had to stipulate probable cause in his arrest, however, after-the-fact Castro stated he doesn’t believe they had probable cause.

“When they indicated that I physically assaulted public safety officers, that never happened,” he said. “That I spun (one marshal) 180 degrees because I hit him so hard and then at the same time I elbowed the one within seconds is an effort to create a story that never happened, to intentionally damage my name.”

And of the year-long battle as a whole, Castro says: “Although it has been a tough year for me personally, and the process is made and built in a way that could make you drift in a different direction, you can compromise your principles and your goals and objectives, and your partnership with the community, and the cause. We stood strong and had a great team of supporters and activists and a great legal team that kept me grounded and reminded me of why I do what I do every day to benefit the community. It was a long year …. But we knew what transpired in that sallyport, how they intentionally provided false police statements, that they wanted to justify that in any way to justify the bigger picture or harm me in a way using the process but we prevailed. We challenged the process. We hold the process accountable. So they dropped all the charges by dismissing the case. It was a victory to everybody. …It’s a win for the community, the community is the real winner here.”

Community members agree that they share in his victory. Many organizations rallied behind Castro throughout the year, like the Connecticut Immigrant Rights Alliance and Unidad Latina en Acción—the organization that on Nov. 15, the day of the dismissal, left this Facebook message:

When we fight, we win!

Almost a year ago, Miguel Castro, Councilman for the city of Meriden, accompanied by some children in court when the court sheriffs delivered their father to ICE. The State of Connecticut accused Miguel Castro of serious crimes for inciting a mutiny and assaulting a bailiff, charges that have been completely dismissed and dismissed.

Without fear, Miguel said present in all demonstrations to support all families who fought against a deportation.

Today the court dismissed all charges against Miguel! We thank Councilor Miguel Castro and all of you who filled the court over and over again to demonstrate solidarity.

Yolanda Castillo, a founding member of the CT Hispanic Democratic Caucus and who just recently got re-elected to serve on the Manchester Board of Directors, says she sees Castro as a hero. “I was really excited when they dropped the charges,” says Castillo. “Miguel to me is like the hero. He is so involved with the immigration issues and helping with the immigration community. And to have someone stand firm on this … to stand firm and make a point, I am really grateful. And it was important that he stood by there and see it end. And they did well. He has always been very involved and very giving and to me. It is so important that we help those that don’t have a voice and he did that. Just imagine, he is someone who was in a political position and got charged, what happens to those who don’t have a voice and how long would it have taken for it to resolve. It took him a while so imagine someone who doesn’t have any kind of fame having to deal with that kind of situation. [The immigration situation] is so bad, and it’s important that we stand by that community and give them hope and support. And so that’s why for me Miguel is my hero because he stood by his community and his case was dropped and that sends a strong message that we need to come together and support our community and stand for what is right.”

While Castro’s personal court case has wrapped, he says a bigger issue remains and he intends to see it through. Castro says the next step is to start to have an open conversation where they can enact legislation that is going to change the system and fix the process.

He says that he feels the process was violated in his situation, which leads him to worry for the members of the community that are not in his position to fight a year-long battle. “In my case, they felt empowered and encouraged to recreate a scenario that never happened. And all of these charges together would have put me in jail for 20 years and cost me thousands of dollars in fines,” Castro explains. “Could you imagine the other members of the community that could not have the opportunity to fight the process.”

In order to tackle the larger issue that Castro sees within the judicial system (he says racial profiling is a big chunk of it), he says it must be addressed with legislation and he says “we are willing to take this on.”

“I am willing to do this in the best possible way I can use my place of privilege, my voice, and my experience,” says Castro. “I hope it is also to open an investigation to determine the legitimacy of any statement the marshal had provided the state police to determine how truthful they were because if they were encouraged and empowered to lie, then I’m sure they’ve been empowered and encouraged to lie before, and that it is not their first time.”

Publisher’s Note: The court marshals at Meriden Superior Court refrained from commenting on the case.

For Latinos Meriden Has Reached The "Tipping Point"

Bill Sarno CTLatinoNews.com   After more than 60 years of migration from Puerto Rico and other Spanish-speaking countries, and an ongoing struggle...