As CTLatinoNews looks ahead to a brand new year, 2014 offers a number of wonderful possibilities for us, not only as a news site, but also in the abundance of potential stories to cover.   First, we’re happy to say that this year in July, marks the beginning of our 3rd year as a trusted news source reporting on the state’s Latinos, providing Latinos and non-Latinos with stories that aren’t found elsewhere. Like any other news operation, we too continue to evolve, and this year we look forward to new media partnerships, introducing occasional video new stories, and increasing our coverage of the state legislature.

As for some of the potential stories, that have caught our attention for 2104 – well, they range in topics on Latino issues, impact and influence in several arenas – politics, philanthropy, health care, Latinos and business, as well as the increasing effort right here in Connecticut to pay tribute to the long forgotten ‘Borinqueneers’.

Here are just a few of the interesting stories and highlights, 2014 offers.
Eddie Perez
This past holiday season, it seemed there were few Latino events in Hartford, where Eddie Perez was not present, fueling speculation in some circles about his future and legacy.

This past year, the Connecticut Appellate Court threw out his 2010corruption convictions and ordered two new trials, but this is a politician who was elected to a third term as mayor even after he had been indicted.   There are some like  local resident Iris “La Vida” Garcia, who is still a staunch Perez supporter and says, “One hundred percent, he’s still my Mayor! I’m sixty-one years old and I’ve come a long way with Eddie. That man belongs to us.”  Another former Hartford voter who preferred not to give his name offered a contrasting view, “”He double crossed us, the Puerto Ricans that live here.”  Perez is now working as Vice President of Business Development for a new venture, “Su Seguro”, an insurance agency.  The question is, will he forever be a divisive figure in Hartford’s Latino community?
Racial Health Disparities

Although, the serious  issue of gaps in health care for Latinos and Blacks is well known, the state’s new health exchange was slow to begin its reach out to potential Latino enrollees, nor is able to keep data on how many new registrants are Latinos, although they make up 25% of its target group.  This coupled with the Affordable Health Care’s Spanish language health exchange site was not operational for many months after the initial launch of the exchange, raises numerous questions.  CTLatinoNews will be looking at these issues, as well as the lack of a “one door” access to the system, and once in – navigating the complex health care system.

New Britain Borinqueneers Memorial Park
Hector Rivera is one of the remaining Puerto Rican soldiers who served in the 65th Infantry in WWI, WWII and Korea.  He and his fellow soldiers endured discrimination on many levels while they served.  They could not use all military facilities, they were told not to speak Spanish and although fighting for the U.S., the soldiers, as residents of Puerto Rico could not vote in U.S. elections.  But  they say they were proud of their service and nicknamed themselves the “Boriqnueneers” , going on to fight in some of the fiercest battles in all the wars.

After the unit was disbanded after the Korean War, they were a forgotten part of history, but in recent years efforts by many nationally have been underway to get the Borinqueneers Congressional recognition similar to that given to the Tuskegee Airmen and the Navajo Code Talkers.  Here in Connecticut, this past year, an effort was launched to create the first memorial park in the nation in their honor to be located in  the city of New Britain.   Among those leading the effort, Representative Robert Sanchez, New Britain Alderman Manny Sanchez and School Board Chair Sharon Beloin-Saavedra among many others.
This past  Veteran’s Day a ceremony was held for the first time at the site of the future park, and this year a showing of the movie, “The Borinqueneers” will be held at the state capitol to develop more support for the project.  The site organizers will not only serve as a tribute to the Borinqueneers, but also as a focal point for teaching young Puerto Rican children about a part of their history,  as well as serving as an educational tool for all.
Latinos in Notable Leadership Roles
Latinos around the state continue to move into leadership positions in

different arenas that allow for impute into key policy making decisions, a significant step toward better representation of Latinos and Latino issues at all levels in Connecticut. These two Latinos have assumed  two key leadership positions for 2014, we are committed to keeping you informed on who, what and where, as it pertains to leadership.


Yvette Meléndez
Yvette Meléndez has become the first Latino to serve as the Chair of The Board of Directors of the Hartford Foundation for Public Giving, the state’s largest foundation.   Meléndez, who is a Vice President for Government and Community Alliances, Hartford Healthcare and Hartford Hospital will lead the Board as of 2014.
A well known leader in the state’s Latino community, Meléndez is also Vice-Chair of the state Board of Regents which oversees the state colleges and community colleges and is a former COO of the state colleges system.
Tomas Reyes
Tomas Reyes was appointed as Chief of Staff for for New Haven’s Mayor Toni Harp.     As one Latino political leader put it, ” we now have a Latino as a co-pilot in the New Haven mayor’s office.  His appointment was praised as a victory for all Latinos in Connecticut, a symbolic step in access to the halls of power where critical decisions are made.   A veteran political leader, Reyes served as President of the Board of Alderman in New Haven and later as Chair of the CT Hispanic Democratic caucus for 12 years.

The CTLatinoNews.com team is looking forward to another great year of keeping you connected, we thank our readers, advertisers and supporters around the state and we pledge to continue to bringing you quality news coverage on this dynamic community.
Best Wishes for a Wonderful  New Year to All!
Diane Alverio
Publisher and Managing Editor 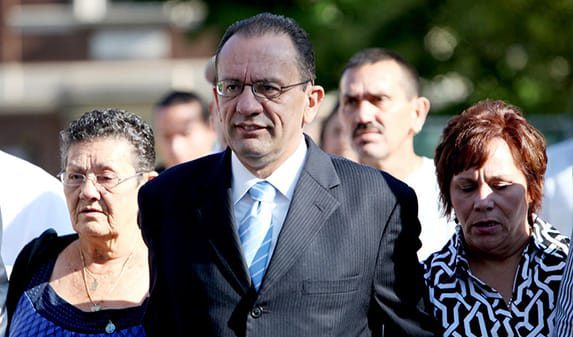