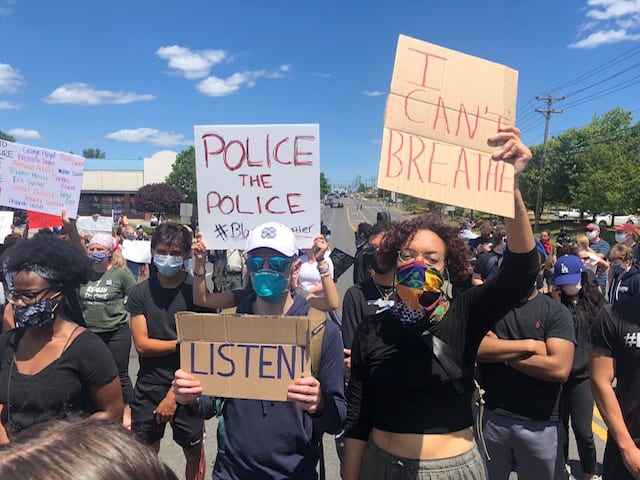 The weekend was filled with mostly peaceful protests throughout the state in response to the death of George Floyd, a black man who died after a white Minneapolis police officer pressed his knee onto Floyd’s neck…for 8 minutes.

On Sunday, protestors nonviolently closed down portions of Interstates 95 and 84, and state Route 34 in New Haven, according to ctpost.

In Stamford, about 500 protesters made their way through the most crowded parts of the city, blocking traffic on Atlantic and Bedford streets. Activists chanted “justice for brunch” as they passed people dining outdoors.

Nearly 1,000 protesters gathered in New Haven, in front of City Hall, marched to and occupied portions of Route 34 and I-95 and went to the city’s police department, where some clashed with officers.

“I stand with the residents of New Haven and the New Haven Police to speak out against police brutality. What happened to George Floyd and what has happened to many others must stop,” Mayor Justin Elicker told ctpost.

Groups of protesters took over streets in parts of Norwalk and I-95 on Sunday afternoon and shutdown traffic, patch.com reported.

The protests appeared to be peaceful throughout, drawing thanks and praise from local leaders and Norwalk Police Chief Thomas Kulhawik.

“Thank you to all who attended today,” Kulhawik wrote on Twitter. “Your voice was heard. We appreciate the peaceful and safe manner in which it was conducted. I enjoyed speaking with so many of you.”

Wearing an “I can’t breathe,” T-shirt, Governor Ned Lamont posted a video on social media. “Today is Sunday, a day of reflection – tomorrow is Monday. We get up, and fight for justice all over again” Lamont said.

On Saturday, demonstrators wearing masks gathered in Colt Park and Bushnell Park in Hartford and marched in the street to the State Capitol — causing temporary delays for buses and traffic, reported ctmirror. Hartford Mayor Luke Bronin said in a statement that the protest was both powerful and peaceful.

In Bridgeport, protestors blocked the highway Saturday afternoon. The 27a off-ramps of I-95 South and North were closed and Route 25/Route 8 also faced closures, according to Connecticut State Police.

Angry protesters denounced Floyd’s killing — and that of 15-year old Jayson Negron who was shot and killed by officer James Boulay three years ago. The shooting was ruled a justifiable use of deadly force.

Police say Negron was driving a stolen car, and that when officers tried to pull him over, he fled, striking Officer Boulay, who fatally shot the teen.

According to the investigation, the Latino teenager put the car in reverse, at a high rate of speed, pinning the officer almost underneath the vehicle.

Negron’s family announced a federal civil lawsuit last month on the anniversary of his death, reported WTIC-TV. The lawsuit states that Jayson was deprived of his right to life without due process of the law.

Jazmarie Melendez, Jayson’s sister, said, “It was very difficult for our family to get the process of a lawsuit started because we were blocked from doing so, this is a tactic often used by them because they don’t want families to seek legal justice.”

“I would like to say publicly; the city has tried to offer our family money and we have rejected the money… money will never bring Jayson’s life back and there is no price that they can put on Jayson’s life,” said Melendez.

In this article:George Floyd, Jayson Negron