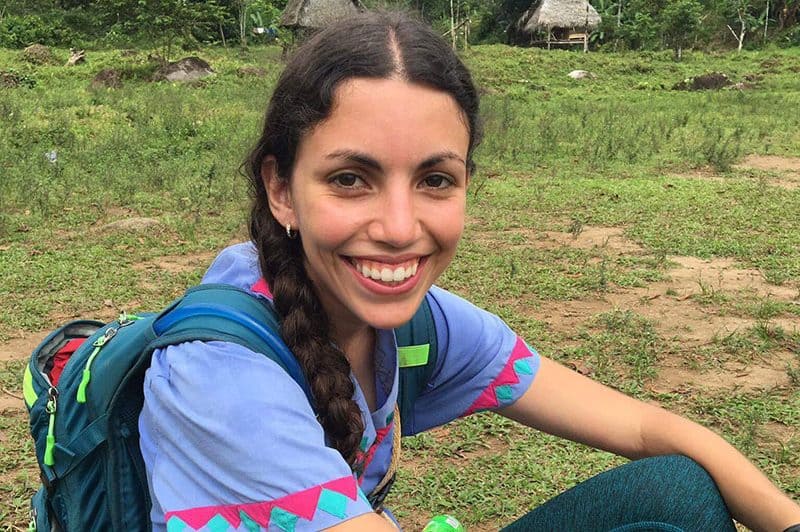 On June 16, 25-year-old medical student Carolina Vicens-Cardona returned to Panama for the third time. She has returned to finish her research she began in the summer of 2016. Assisting her efforts, the UConn School of Medicine and the UConn Health Graduate School awarded her the 2019 Maria and Edward P. Hargus, M.D., Professor Judy Lewis Global Health Education Scholarship. Vicens-Cardona put the scholarship towards her plane ticket and other travel expenses and stay in Panama for a period of 6 weeks. During this time, she will be digging deeper into the culture and the family planning needs of the indigenous Ngäbe communities.

Before becoming a volunteer in Panama for Floating Doctors, Vicens-Cardona knew two things: she was interested in global health and had a strong desire to work in Latin America. After graduating with a Bachelor’s Degree in Industrial Microbiology from The University of Puerto Rico at Mayagüez in December 2014, she had “spare time to fill.”

“I had the gap period between when I graduated and when I would begin medical school in the U.S.,” explains Vicens-Cardona, “so I actively began looking for volunteer opportunities near Latin America where I could do something healthcare-related. And that’s how I came across Floating Doctors.”

Floating Doctors became a reality in 2010 during the Haiti earthquake. While plans had been in motion for this non-profit organization and a huge 100-ton boat was being repaired by a small group of volunteers led by Founder and CEO Benjamin LaBrot, the Haiti earthquake was what set them in motion … they knew they had to act, and they haven’t stopped since. Today, Floating Doctors is comprised of physicians and volunteers from all over the world and they provide health care, education and community development to underserved communities.

Vicens-Cardona began as a volunteer with Floating Doctors mainly as an interpreter. Upon return (her second trip), and then in medical school, she started her research on family planning. For this, she interviewed over 140 women and spoke to many more who didn’t want to be interviewed. Currently (for her third trip) she says she is focusing more on qualitative data. “Before I was gathering basic information,” Vicens-Cardona explains, “like numbers, ‘How many children do you have, etc.’ Now, I want it to be more of a conversation and fill in the gaps.”

Ultimately, the goal is to learn about the culture and views on family planning in the region, to, listen to their fears and beliefs surrounding the topic and then, with this deeper understanding of the culture, improve Floating Doctors’ family planning program.

Vicens-Cardona says her ethnicity has been a huge asset in her work in this part of the country. Not only because she can speak Spanish but because she can relate to their culture. “I was born and raised in Puerto Rico, and even though I am not Panamanian, I do believe that Latinos share a very similar culture, so I feel like I can relate to a larger degree than some other people.”

During her first volunteer mission, she was the only Latina with the crew of Floating Doctors. “That really surprised me,” Vicens-Cardona admits. “It was so strange to me that this whole team was here in Panama and everyone else was not Latino. It just didn’t make sense to me. So I think that is why during that first trip I felt extra helpful.”

Not only does Vicens-Cardona see her ethnicity as an asset in Latin America, but back home as well. “A lot of my professors and fellow classmates think that it is very helpful that I am Puerto Rican,” she says.

“And every time I see a Puerto Rican patient or any other Latino patient I get so excited and happy because it feels great for me to be able to talk in our own language and just communicate with them better than maybe someone that doesn’t speak their language.”

While Vicens-Cardona’s current work has been OBGYN related in the future she plans to gear her studies and work towards mental health. “I am actually thinking of going into psychiatry,” she admits. “I do think the work I’ve done [in Panama] is relevant to psychiatry because what I’ve done here is talk to people and listen to people, which is obviously a big component of psychiatry. But I also love working in women’s health so I definitely want to continue doing that, just from the mental health perspective.”

She says growing up the topic of mental health came with a stigma attached to it in the Latino community. “It is common in Latino culture to think that mental health care doesn’t work, that if you have a problem you have to be strong and proud and just deal with it. But in medical school, I learned a lot about mental health and I have seen it work with my own eyes. So what I would like to do is work on education and work with the Latino population in the field of mental health. But I am still figuring it out.”.

No matter the field of medicine Vicens-Cardona decides to focus on, one thing is certain, she plans to gear it towards helping Latinos, helping her people. “I feel lucky to be Puerto Rican, I am very proud of my country and proud of my people and I hope to continue to do good for my people, and I think [being Puerto Rican] has been very positive and it has allowed me to do many things. I wouldn’t be here [in Panama] if I wasn’t Puerto Rican. It is a part of my identity and it’s shaped my past growing and who I am today.”

Vicens-Cardona has no trips planned as of yet to return to Panama but says it is a possibility in the future. “I will definitely miss the people I have met here. I have learned a lot from them! I have met many kind, compassionate and hard-working people during my time here who are a model for me for both my personal and professional life. I also really admire the strength, openness, and sense of humor of the many people from the community who took some time to talk to me and share a bit of their lives with me.”