By Wayne Jebian
CTLatinoNews
What happens when you set Latino and Latina equal to each other? You get Latin@. It’s not a typo, but in fact a perfect blend of the two words, with the “a” and the “o” coexisting as one. That message of equality is exactly what Dr. Julio Morales, founding director of the University of Connecticut’s Puerto Rican and Latin@ Studies Project, hoped for when he helped create the university’s School of Social Work.
The project, which originally used the term Latino and now conveys it sense of equality through the use of Latin@ in its name, recently marked its 40th anniversary within the university’s social work department. Morales was honored for his the work in starting the program and for what he has has done for the Latino community at the university.
Originally from Vieques, Puerto Rico, Morales came to the UConn School of Social Work in 1978, serving as a professor for 25 years and Dean of Students from 1980 to 1985. Under his leadership and afterward, the Puerto Rican and Latin@ Studies Project has helped bring cultural competency to the practice of social work, as well as advancing the Latino presence in higher education and other professions.
The adaptation of the “Latin@” spelling in the project’s formal title reflected his call to signify equal status between Latino and Latina. His work on behalf of underrepresented populations later extended to equality regardless of gender and sexual preference.  “We made lesbian and gay students feel welcome at a time when they were having a hard time gaining acceptance from their families,” Morales said.
According to Uconn’s Vice Provost for Diversity Dr. Jeffrey Ogbar, the Puerto Rican and Latin@ Studies Project’s inception can be traced back as a result of the black and brown power movements of the 1960s and 1970s.
“It began with the student movement, demanding more Latino faculty and students in higher education,” Director Dr. Catherine Medina said. She added that the project has since become a model for institutions of higher education worldwide.
“Our graduates have become higher education scholars, judges, directors of agencies and public officials,” she said.
One alumnus with a particular tie to the program? None other than Hartford Mayor Pedro Segarra.
Segarra, the typically reserved Mayor of Hartford, brought a mood to Wednesday night’s celebration that was both giddy and triumphant as the school celebrated the milestones of the past four decades. He traded quips with his partner, fellow UConn MSW Charlie Ortiz, and when Segarra’s turn came to speak, he told the crowd how profoundly his life had been affected by the project, particularly by Morales, his former mentor.
Morales split the spotlight with the project itself, as he was credited with bringing both the leadership and the funding necessary to ensure the program’s longevity.
The Dean of the UConn School of Social Work, Salome Raheim, informed attendees that the fellowship fund established by Morales had reached endowment status, having raised an excess of $10,000.
“We’re not going to stop there, but that’s the level it has to reach to be endowed,” she said. “In case that language is new to anybody here, endowed means forever.”
Senator Andres Ayala Jr. took time out from a senate session at the Capitol to present two citations at the event: one for the Puerto Rican and Latin@ Studies Project as a whole, and one for Morales.
Senator Ayala noted during his remarks that the School of Social work had a 98 percent graduation rate for Latinos.
Not only are Latinos posting high graduation rates, but they are applying in droves. Medina said that Latino applications to the school were up 68 percent for the upcoming Fall semester.
The packed evening also saw several scholarship presentations and the announcement of a new director of the project, Dr. Antonia Cordera.
It was an unusually festive mood for an academic observance, aided by a musical performance, Peruvian dancers, and Segarra’s candid sense of humor. At one point, when describing Morales’ influence as a mentor, he declared, “If Jesus Christ would have been Puerto Rican . . .” and was immediately drowned out by raucous laughter.
As a surprise flourish, Segarra presented Morales with the key to the city of Hartford at the end of the event.
One of the most poignant examples of how the UConn School of Social Work and its ethos of mentorship has changed lives came when Segarra’s partner, Ortiz, described his own education and how he hadn’t had a bachelor’s degree when he met Segarra. Ortiz said that Segarra, who had been mentored by Morales, in turn inspired him to apply to UConn.
“He really helped me a lot to give me that push that I needed,” Ortiz said, just before Segarra lightheartedly interrupted him.
“You really just wanted to meet Julio!” interjected the mayor, as the audience once again erupted in laughter and applause.
[nggallery id=22]
In this article:Dr. Juli Morales, Puerto Rican and Latin@ Studies Project, UConn School of Social Work, University of Connecticut 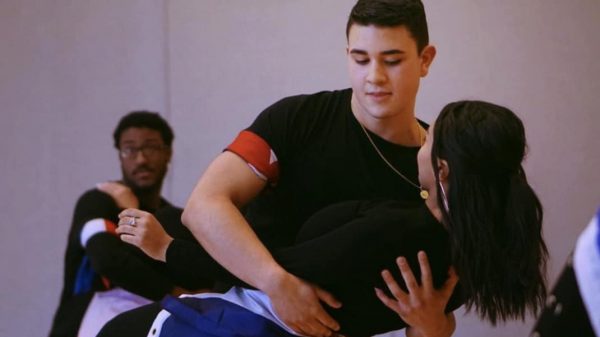 At the University of Connecticut, students have created a group where all are welcome and diversity and cultural history is celebrated

Latino Grandparents In Connecticut Stepping Up To Care For Grandchildren

Bill Sarno/CTLatinoNews.com For Matthew, a 26-year-old Bridgeport resident raised by his Puerto Rican grandparents, like for many Latino children, this arrangement was a...

“Take advantage of every opportunity that’s given to you because you never know where that opportunity is going to take you.” ~ Maribel Sanchez...