Ramon Martinez, the Maestro de Armas at the Martinez Academy of Arms, has taught traditional European swordsmanship for more than 30 years. His students include Guilford resident Andy Baiman, who teaches classical swordsmanship at the YMCA in Wallingford.

“When I began my study, the school was a small mere handful of students,” said Baiman, who started studying at the school in 1985. “Over the years, our numbers grew, and by the ’90s, there were, as best as I can remember, between a dozen and two dozen students enrolled at any one time.”

Martinez recalled how he studied for 10 years under another fencing master, the late Frederick Rohdes before he opened the academy in 1983. He described Rohdes as one of the last instructors to teach swordsmanship as a martial art rather than as a sport. He described his lineage as part of a living tradition.

The academy teaches swordsmanship in the Spanish, English and Italian traditions. He clarified this is not the competitive style of fencing that people watch during the Olympics – his students are taught to approach their training as though preparing for an actual fight.

“I would say that fencing appeals to those who appreciate a Mano a Mano confrontation, along with all its attendant reliance on intelligent strategy, well-trained technique and tactics, timing, proportion, judgment, balance, and, last of all, speed,” said Baiman, a retired teacher who used to run a hardware store in Manhattan.

“I say this regarding speed, because, in classical swordsmanship (and I must interject here unlike sport fencing, which includes both Olympic and Intramural fencing,) if you have a healthy dollop of all of the other attributes, speed becomes much less important. And that goes double for strength. Thus, even more than that famous invention by Mr. Colt, the sword (at least the 19th Century sword) is truly the great equalizer.”

He added that the protective gear and the nature of the weapons made injuries rare and made it unnecessary to “pull punches.”

“Thus, there is no difference between your behavior in a bout, and a hypothetical duel,” he added. “Except, of course, the possibility of injury and the fear factor.”

He said classical fencing allowed for the experience of an actual duel as much as safety would permit.

Martinez recalled how his father Pedro Martinez, who boxed as an amateur welterweight in Puerto Rico, advised him against standing toe-to-toe with opponents and suggested that he instead exercise caution and look for openings. He noted how sports fencers develop different habits than classical swordsman because they are out to score points by striking first, which can cause someone to overextend themselves in actual duel and result in simultaneous strikes – if both opponents strike and injure each in an actual duel, he added, it doesn’t matter who hit first.

“We want to hit and not get hit, not score a hit,” he said. He described how modern sports fencing began in the 19th century.

The academy offers curriculum for different styles regarding the foil (training sword), epee (point only) and saber (edged sword) as well as daggers used in conjunction with a regular sword. He added that his wife, Jeannette Acosta-Martinez (who also holds the title Maestro de Armas) teaches a unique course in training with a wooden stick.

“Maestro began training me in, it seems in retrospect, an almost casual way,” said Baiman, who became a Provost at the academy in 2001. “Each session, he would instruct me in the teaching of a particular skill to a particular student, and he would then observe my performance, later giving me notes on how to maximize my student’s progress. The process was enjoyable and almost subliminal, and after roughly 13 years of instruction in both fencing and the teaching of fencing, he put me through a set of practical and oral exams and awarded me the rank of instructor in 1998. He (Martinez) knew I wanted to teach fencing before I did.

After more of the same, and while serving as Chef de Salle (kind of the sergeant of arms, literally Chief of the Room) for a time, both the fencing and the teaching thereof becoming more and more complex and nuanced over the next 3 years.”

SUGGESTION: A LOVE of fencing from the Caribbean to Connecticut

Martinez noted the misconceptions that some people in the fencing world have regarding the Spanish style.

“A Spanish rapier duel was fought mostly along an imaginary circle, the diameter of which is roughly fixed by the distance between the two duelists facing each other, standing quite erect and point to point, each with his sword arm extended,” explained Baiman. “Offensive actions, therefore, require moving diagonally toward the opponent across an imaginary chord of the circle. It seemed, even to contemporaneous swordsman of other nations, either incomprehensible or merely silly — it is neither.

Conventional it may be, but the skill required to participate in such combat is massive. The exploitation of leverage, and placement of both the body and the weapon, is quite complex, and requires significant study and training to master.”

Martinez said it applied elements of science and philosophy.

He described the variety of students that come to the school – doctors, lawyers, police officers, and actors.

“Fight choreographers come in to learn,” he said. “The smart ones look for historical accuracy.”

Several of his students come from sports fencing schools — most of them do not last too long.

“You can’t depend on the rules to save you,” he said. 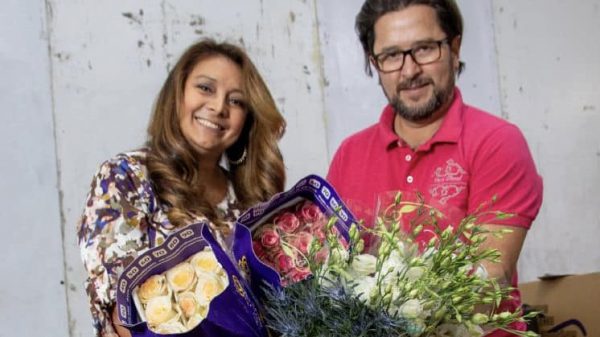 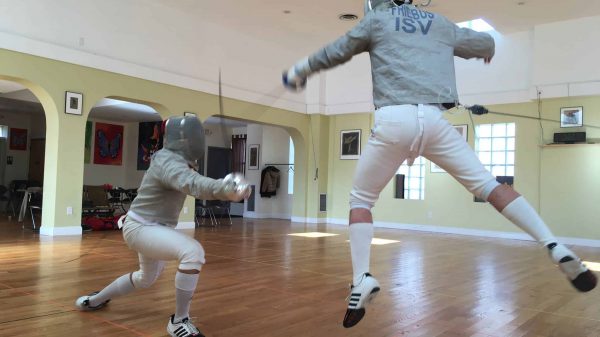