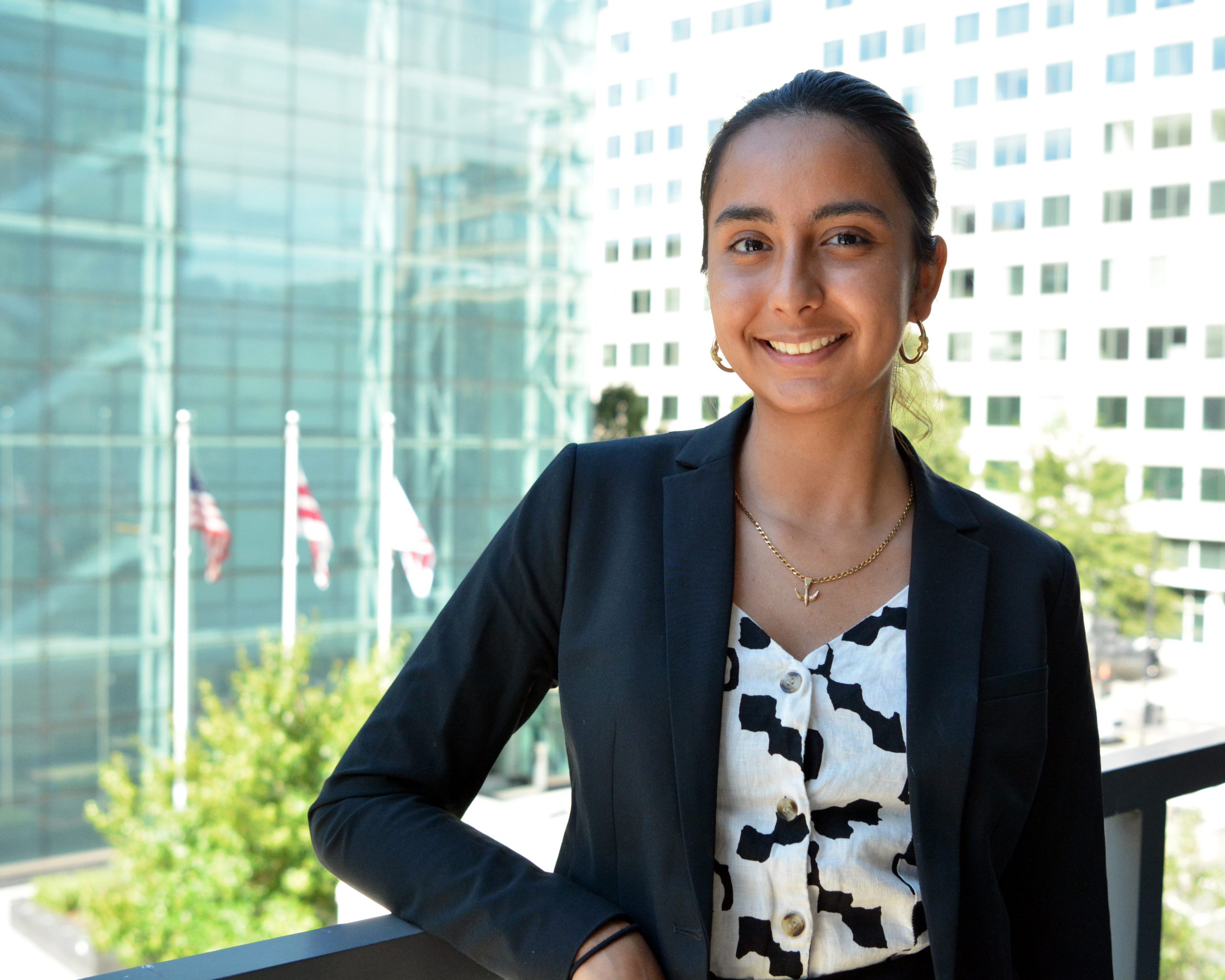 Southern Connecticut State University Junior Andriena Barajas Novoa was one of ten students chosen across the country to participate in the Esperanza United Latina Leadership fellowship this year. / Photo Courtesy of Barajas Novoa.

CT Latino News produces and amplifies stories focused on the responses to the social determinants of health. A key social determinant, work directly impacts people’s physical and mental health, along with their economic stability. Inadequate work conditions and protections greatly impact marginalized communities, contributing to a cycle of poor health and limited access to essential resources.

Southern Connecticut State University Junior Andreina Barajas Novoa grew up in Fairfield county seeing her mother work a variety of jobs across the state, since immigrating in 1997.

One of those careers was in domestic work as a house cleaner – dusting, sweeping, moping, washing sheets. She had been a teacher in Mexico but gave up her profession to move to the U.S. with Barajas Novoa’s father.

“She worked before a bill of rights for domestic workers had been passed in CT…so she wasn’t protected by any specific law,” Barajas Novoa explained. “She and her friend worked in a pair and split up most of the work where sometimes the homeowner would add to the list of tasks without increasing pay.”

Around 42,000 domestic workers serve as housekeepers, nannies, and caregivers in private homes across Connecticut.

In between classes, Barajas Novoa has spent this past year working with local organizations and leaders to evaluate labor rights for Connecticut’s domestic workers—a workforce majorly of women of color.

Women made up 91.5 percent of the national domestic workforce in 2020, with 53.4 percent of those workers identifying as Black, Hispanic-Latino, or Asian American/Pacific Islander according to the Economic Policy Institute.

Local advocacy groups, like the CT Worker Center, have called attention to the lack of protections for domestic workers across Connecticut for the past decade. However, domestic workers still face a variety of threats and discrimination because of narrow labor laws.

Domestic work “is not like a typical job because…the definition of an employer and employee relationship is kind of blurred, so it’s really unregulated – both in Connecticut and in the US,” Barajas Novoa said. “So, because it’s unregulated, gender-based violence is bound to happen in some way, whether that’s like harassment, assault, or other kinds of like sexual violence.”

In April, Barajas Novoa was one of ten students chosen across the country to participate in the Esperanza United Latina Leadership fellowship, which looks to support Latina students pursuing careers in research or policy advocacy.

“That’s really why I chose to focus on it, mainly because my mom was a domestic worker. Some of her friends are domestic workers or have worked as domestic workers,” Barajas Novoa said over the phone, calling from their home in Stratford. “I was just interested in seeing how gender-based violence plays into that labor.”

Throughout the five-month fellowship, Barajas Novoa worked closely with the Connecticut Worker Center, which supports, informs, and advocates for labor rights across the state.

The center has supported 179 domestic workers this past year and found that 96 percent of those residents were women and the majority of these people identified as Hispanic/Latina, according to Barajas Novoa.

“Additionally, many domestic workers are immigrant women and women of color and are particularly vulnerable to workplace exploitation and abuse because of a lack of clear reporting mechanisms, inaccessibility to culturally specific services, immigration status, and fear of retaliation,” Barajas Novoa wrote in her policy two-pager for the fellowship project.

Harassment & Violence In the Workplace

UMass Lowell conducted a 2019 study that looked at the experiences of 42 low-income immigrant Latinas with sexual harassment and violence in the workplace. These individuals worked as factory operators, residential cleaners, hotel housekeepers, restaurant workers, and babysitters.

About 66 percent of the Latinas interviewed said they had received frequent inappropriate comments regarding their periods; 51 percent reported physical closeness and unwanted contact; 28 percent have received explicit sexual propositions at work. While only 17 percent of participants said they had reported the sexual harassment.

“Some of the things that they found were that Latinas are more likely to experience sexual harassment and experienced shame from their community because of cultural norms,” Barajas Novoa said.

It’s a combination of the power dynamics between domestic workers and their employer along with the social shame associated with abuse that prevents these women from seeking support, they explained.

In 2015, the S.B. 446 bill expanded domestic workers’ rights to include being paid minimum wage, having paid time off, sick days, breaks, and overtime pay.

The more comprehensive CT Domestic Worker Bill of Rights was passed in 2016, which broadened the definition of an employee under state law.

However, “there is a loophole in the current law because if less than three domestic workers are employed by an individual and they experience harassment or discrimination the current law does not provide them any protection,” Barajas Novoa wrote. “They would then have to file a claim with local authorities and risk dangers, such as being retaliated against by their employer.”

That same year, the Domestic Workers Taskforce presented a report with recommendations for improving the working conditions of domestic workers. One of the suggestions was to expand discrimination and harassment to all domestic workers regardless of the size of their employer.

Although several recommendations from the 2016 report have been passed into law since then, discrimination and harassment protections for domestic workers remain limited.

“Domestic work is considered a low-wage and female-dominated industry and studies show that workers in these environments have the highest reported incidences of sexual harassment and assault by sector,” Barajas Novoa wrote.

A first-generation Mexican American, Barajas Novoa explained how their identities have influenced their passion and focus on public policy advocacy and labor rights.

“I think it’s that connection with people that’s really made me want to pursue a path in labor policy work and help with Latin American advancement and ultimately, like work towards a goal where we’re all liberated from our collective struggles,” they said.

Although the Esperanza United fellowship ended in August, Barajas Novoa hopes her research and policy proposal will help guide local organizations and leaders in their continuous efforts to strengthen labor protections for Connecticut’s domestic workers.

“I think we could also find out how we’ve been complicit in playing into these stereotypes and misconceptions about the work of domestic workers,” she said on what people can do on an individual level to support these residents.

Raising awareness on the subject should come first, before diving further into advocacy, they explained.

“I think some people have issues with seeing why this issue matters to them, especially if they don’t have a relative or friend that works as a domestic worker. It’s still an issue that impacts the conversation around like sexual violence, and everyone should be protected regardless of status… [and] gender or sexuality. Everyone deserves protections.”

Editor’s Notes: CT Latino News will continue to devote time and resources to produce in-depth reporting and solutions-based journalism on local efforts that advocate for domestic workers rights across Connecticut.

CT Latino News sees the public as more than just the audience; you are contributors. To that end, please take our brief survey to help shape our coverage in producing stories on the social determinants of health: healthcare and quality, neighborhood and built environment, education access and quality, social and community context, and economic stability.