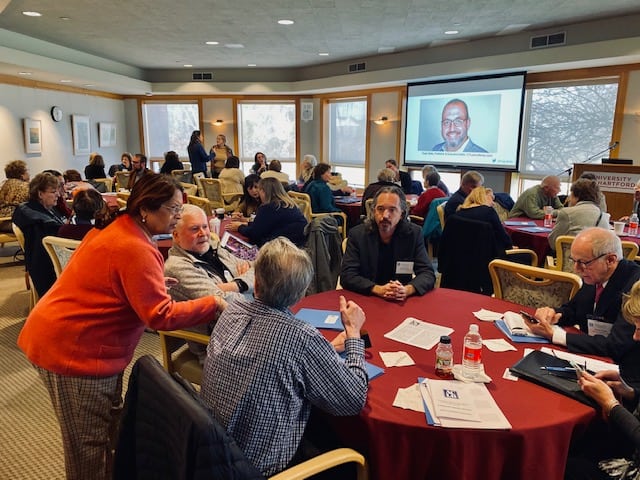 “My name is Hugo Balta”, I replied at a normal pace. “Nice to meet you”, I continued.

“Oh, you speak English!”, exclaimed John surprisingly. “And you speak it so well. Where are you from?!”

He wasn’t asking where in the U.S., but where in Latin America; assuming that “I wasn’t from around here (this country).

And, so goes an all-too-familiar, prejudiced interrogation, riddled with stereotypes about who I am based on my ethnicity. John is not the real name of the persons I have encountered throughout my entire life who assume I am a foreigner because of my outward appearance.

I would get angry and defensive when I was young, but I learned that generally, their good intentions did not match the negative impact of their ignorance. Their understanding or lack thereof is based on their exposure to incessant negative narratives in mass media about the Hispanic, Latino community. And so, I’ve learned to use those uncomfortable moments as learning opportunities to broaden their limited perspective and chip away at tired stereotypes.

A truth that shouldn’t be a surprise to anyone, but still is, especially to non-Hispanics, Latinos.

According to the Pew Research Center, the majority of Hispanics, Latinos in the U.S. are born in this country and are English dominant and/or have a high level of proficiency in the language.

This was a significant point I brought up in my keynote address at the Association of Connecticut Library Boards’ (ACLB) Leadership Conference at the University of Hartford this month.

I shared that CTLatinoNews.com interviewed Lieutenant Governor Susan Bysiewicz for an article on the importance of Hispanics, Latinos in Connecticut participating in the 2020 U.S. Census, and how disappointed I am at her lack of understanding of this diverse community.

The lieutenant governor said she has spoken on Spanish-language radio through a translator, has enlisted ethnic publications La Voz and Idendidad Latina and the AFL-CIO is producing Spanish language videos.

I applaud Bysiewicz engaging with Spanish language media in an effort to inform and educate the Hispanic, Latino community about the 2020 Census, but if the State’s efforts are only in Spanish, it’s missing a huge opportunity of reaching the entire community of nearly 600,000 strong statewide.

I am not diminishing the importance of providing pertinent information in Spanish, not at all. There are more than 40 million people who consume news, information and entertainment in Spanish; ranking the U.S. as the second country in the world (of more than 20) with such a population. Only Mexico has more Spanish speaking people.

Yes, ‘Merica – like it or not, the United States is a bilingual country.

And that goes for the majority of the U.S. Hispanic households, that are multigenerational. These are homes where the parents (some foreign-born, some U.S. born), children (mostly U.S. born) and abuelos (mostly foreign-born) are living under one roof. English and Spanish are spoken, at times interchangeably making bilinguals a community and market unto themselves.

I often use Wells Fargo’s “First Paycheck” commercial as one of the best examples of marketing that not only understands the language dynamic of Hispanics, Latinos but also the cultural nuances.

Several data demonstrates that Hispanics, Latinos are speaking and consuming media more and more in English. At a time where budgets are contracting, the idea of not including English, culturally relevant marketing is short-sided.

The State of the Latino News Media report, released during the Latino Media Summit in New York City earlier this year found that of the 624 media outlets catering to a Latino audience, only 45 are English and of these, only nine are digital-only — including CTLatinoNews.com. That is a problem since the majority of the 60 million Hispanics, Latinos in this country are underserved in English and in their platform of choice, digital.

The Connecticut Complete Count Committee (CCCC) lacks the cultural competency of understanding English is necessary in order for messaging on the 2020 Census to reach the state’s entire U.S. Hispanic, Latino population.

While there is an overwhelming fear by the foreign-born Spanish speaking community to cooperate with the Census count, due to the incessant attacks against the immigrant community by the Trump administration; it will be the English dominant family members who will demystify the process.

The now-blocked citizenship question on the 2020 census that the White House was pushing has achieved its desired effect: many Hispanics, Latinos will not engage for fear of repercussions be it deportation, denial of a green card or the like.

It is the number of residents, not citizens, that determines the apportionment of congressional seats and delineates state legislative districts for the next decade. A low count of Latino residents could limit their growing political clout.

I was proud to share with the audience that CTLN is partnering with the Connecticut State Library in informing communities about the 2020 Census.

Libraries are natural gathering places and the perfect setting for CTLN Community +, an initiative where newsroom managers from several news outlets serving Connecticut will join me on listening tours throughout the state next year, hosted at libraries, where we will get a chance to discuss topics of high interest to the public including an accurate Census count of everyone in the state of Connecticut.

Many people go to the library for tools that are not readily accessible to them, like computers. And since the Census Bureau has implemented an online response for the first time, allowing users to respond electronically, Libraries are an invaluable resource.

The Constitution requires, a count of all people residing in the country every 10 years. Census results have a socio-economic and political impact on the state like how federal grants are allocated for programs serving lower-income communities, voting districts, and how many representatives each state has in Congress.

To put it bluntly, Connecticut can’t afford a lack of participation in the 2020 Census – every person represents $2,200 in federal grants to the state, about $11 billion in total.

As the only English language news and information outlet dedicated to Hispanic, Latinos in Connecticut – CTLN will be key in empowering the community to make the best, informed decisions.

In this article:English, Hispanics, Latinos