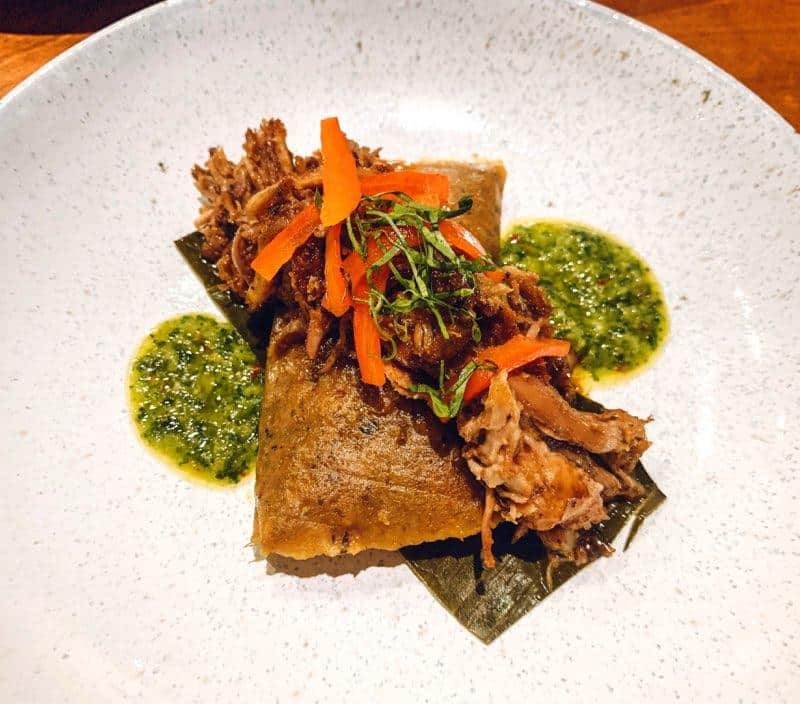 Ahead of the December opening of tapas and wine bar Verdura in Granby, chef Samuel Rivera is hosting pop-up tasting nights this Friday and Sunday at sister restaurant La Figata. The pop-up will feature dishes under development for his new Caribbean, African and Spanish inspired menu.

In a community where just 1% of residents identity as Hispanic or Latino, the menu’s offerings are expected to be a new taste for many guests, and Rivera hopes that this weekend’s tasting will help him learn more about his patrons’ preferences before he finalizes recipes for the 18 different tapas complemented by cheese and charcuterie from Spain that will be served at Verdura.

“We want to get people out of their area of comfort. We want them to arrive for the food but stay for the experience, the impeccable service, the seductive aromas, and our unique selection of wines and rums,” says Rivera. At the same time, he wants Verdura to be a destination for guests from across the region who are already well-versed in Latin flavors.

“The menu is ‘poor people food’ elevated to fine dining…Everything is from scratch.”

Rivera attended school in Bristol, and began working in the restaurant industry doing prep work at Joey Garlic’s. He attended Lincoln Culinary School, and went on to work at Blue Plate Kitchen and Peppercorn’s before relocating to Puerto Rico. “My goal was to better learn cooking techniques from Puerto Rico and Latin American countries,” he says.

He honed his skills in the kitchen at Verde Mesa in Old San Juan, the acclaimed restaurant serving Moroccan, French and Spanish influenced dishes. There he also met his now-wife Nicole, who was a server at the restaurant.

When the couple was expecting their first child, they returned to New England– just a month before Hurricane Maria devastated Puerto Rico. Their daughter Amelia was born in January 2018.

Rivera says that the hurricane elevated awareness of the island’s struggling economy and infrastructure needs, along with Puerto Rico’s long-suffering agriculture sector. “Agriculture died in the 1950’s and more industrial food was introduced. Goya cancelled traditional island cooking. We can do it without Goya, with fresh ingredients.”

“I want to make Verdura feel like part of home,” says Rivera.” I miss the flora, the ambience and the traditions of Puerto Rico.”While Rivera is currently using local purveyors to source his ingredients, he hopes to be able to procure produce from Puerto Rico, and he is currently experimenting with fermentation techniques on root vegetables to change their flavors and textures.

Verdura is the newest of several restaurants operated in the Farmington Valley by Zen Restaurant Group– @thebarn, La Figata, Han Asian Cuisine, all within walking distance each other in Granby, and Table 570 in Simsbury.

Zen marketing manager Danielle Sturgeon said that the tapas bar concept was just one of several being considered for the space previously occupied by the Farmer’s Kitchen, a busy Zen-operated breakfast spot which is now serving from @thebarnduring morning hours.  Joe Bucholz, chef at La Figata, where Rivera serves as sous chef, recognized his talent and recommended the space be utilized for a tapas bar with Rivera as head chef.

“We want to make Granby a dining destination,” says Sturgeon. “Our flagship restaurant, @thebarn, has an incredible wine and cocktail program. We don’t want to compete with that. The wine program at Verdura will be strongly Spanish influenced with tasting flights and food pairings.”

Rivera says that his menu will be published in Spanish with English descriptions, and he hopes to identify bi-cultural and bi-lingual staff who can educate guests who are unfamiliar with Latin flavors and ingredients. “Verdura will be a place where people will eat, drink and talk,” says Rivera. “I want to show people exciting new things– the flavors, ingredients and traditions that are waiting to be shared.”

Verdura will open its doors at 10 Hartford Avenue in Granby for private parties beginning December  1. A soft opening featuring the regular menu and BYOB is scheduled for December  12. BYOB will remain in place until the restaurant’s liquor license is finalized.