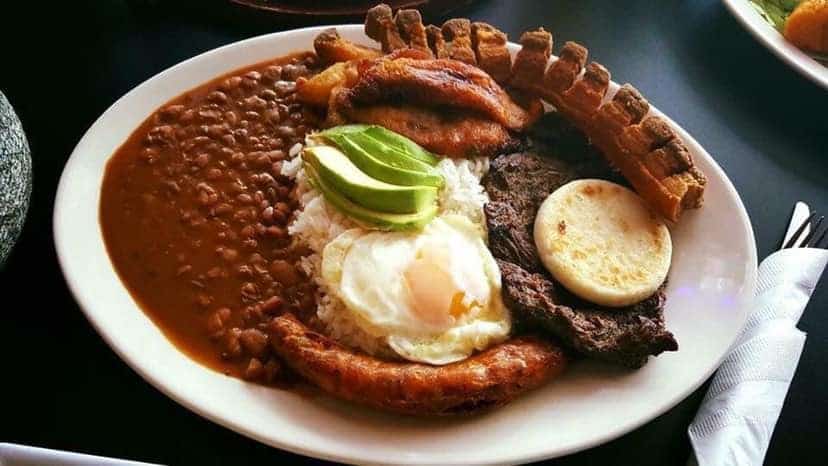 Maynor Martinez knew he had a talent for cooking, largely inherited from his mother, who he says is more gifted in the kitchen then himself, and a grandmother, whose special ingredient was love.

But it wasn’t until he worked several years in the kitchens of various restaurants in the Hartford area and even spent time as a painter in Connecticut and California, that Martinez, a native of El Salvador, says he learned cooking was his passion.

Today, this love of preparing food for others to enjoy is expressed at Rosita’s Latin Cuisine, the restaurant he and his wife Mary, also from El Salvador, operate in Manchester on Middle Turnpike East.

Martinez, who does all the cooking, describes his menu as a “fusion,” bringing together popular Mexican fare with an array of dishes from central America, especially his native El Salvador, Guatemala, and Honduras, as well as from Peru and Colombia.

“Much of Central American cuisine is copied from Mexico but with changes based on what is available locally,” Martinez said. For example, he said, in some areas people like spiciness as part of the dish while El Salvadorans prefer their spicey elements on the side.

The restaurant also serves pandebono, a Colombian bread, which Martinez said was influenced by Italian workers, and consists of cheese and yuca (cassava) flour and thereby is gluten-free.

“We cook healthy and use the best oils,” the restaurateur said. “It takes longer and tastes better.”

Martinez travels as far as Boston to obtain the right ingredients for his dishes. He also gets help from family members in El Salvador who supply the beans he uses in many dishes as well as the coffee he serves. He said that processing in the Central American country imparts a different flavor to the items he imports from his homeland.

Martinez road to the kitchen at Rosita’s took him from El Salvador to Connecticut in 2005, when as a young teenager he came to this country with his mother and sister.

While improving his English, he fine-tuned his culinary skills in different restaurants throughout the Hartford area, including Italian eateries in West Hartford and in South Windsor.

However, Martinez said his mother “always wanted a restaurant” and in 2012 the family launched a Rosita’s, named after her, on Park Street in Hartford. The restaurant had a good following from the local Latino community, especially Hondurans, but the situation was beset with issues including high rent and shortage of parking.

A few years ago, through a Colombian friend, Martinez saw that a location with plenty of parking was available in the Sam’s Food Stores plaza in Manchester. He liked the site, which is part of a strip of stores that includes a Chinese restaurant, and two years ago Rosita’s Latin Cuisine debuted in Manchester.

For a period, Martinez tried to operate both Rosita’s but he eventually decided to focus his efforts in Manchester. “So far,” he said of this decision, “I can’t complain.” He also noted his family, which now includes a four-year-old son Kevin, a restaurant “regular,” lives nearby and he “loves Manchester.”

Not surprisingly, much of Rosita’s customer base is drawn from Manchester’s growing Latino community and includes people from throughout Central America as well as from Colombia, Bolivia, Argentina and “even Italy,” Martinez said.

On weekdays, Martinez said about 70 percent of the customers are local but on Saturday the clientele includes many people who were familiar with his restaurant in Hartford.

Rosita’s is closed Mondays when Martinez on his day off often travels to Boston to obtain Latino ingredients that are not available in the Hartford area or if he has some spare time, he might visit the Beardsley Zoo in Bridgeport.

Rositas is a bring your own beverage restaurant and seats approximately three dozen people. The eatery also handles takeout orders and accommodates deliveries through the Grubhub app.

The “house specialties” are priced from $9 for baleadas made with Honduran cheese, handmade flour tortillas with beans and scrambled eggs, avocado, and beef, to mar y tierra ($24) which combines skirt steak, grilled chicken and shrimps served with rice, beans, pico de gallo, salad and avocado.

There is a kids’ menu that offers choices such as chicken hot dogs and fingers, french fries and a cheese quesadilla with the price range $5 to $7.

What Martinez considers one of his best dishes and what he says most people like is bandeja paisa, This dish ($18) essentially is a combination plate with Colombian origins. The elements include skirt steak, corn arepita, Colombian sausage, fried pork white rice, avocado, sweet plantains, and beans.

Maynor and Mary, who runs the front side of the restaurant, recently added a Sunday buffet on Sundays which features dishes such as chicken alfredo, barbeque ribs, Peruvian chicken and tilapia. The price is $9 for adults and $5 for children, and items from the regular menu also can be ordered.

One of Rosita’s regulars is a Cuba-born Latina who is committed to Rosita’s ceviche de camarones which blends shrimp in lime juice with Peruvian peppers and onions.

Another Latina who is enamored with Martinez’s cooking is from Bolivia and has offered to teach him how to prepare dishes from her homeland.

While Martinez looks to expand his menu and remains passionate and knowledgeable about what he serves his customers, in the end, he admits that as a cook he “can’t compete with his mother.”

In this article:Manchester, Rosita's Latin Cuisine