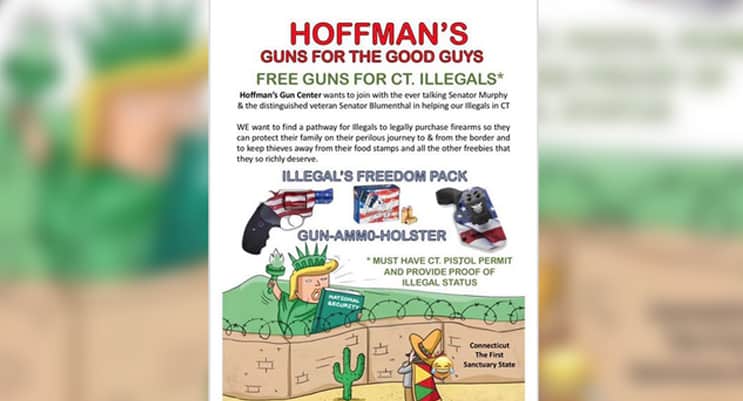 At a time when President Trump’s repeated demonizing and denigration of Central Americans seeking refuge in this country is whipping up anti-immigrant fears and hostility, a Newington gun dealer has added its take on this controversy by targeting so-called “illegals” in a fake advertising flyer placed on social media.

Using the heading “FREE GUNS FOR CT. ILLEGALS,” Hoffman Guns for the Good Guys” Facebook page recently featured a derisive attempt at humor at the expense of undocumented immigrants through a posting with a cartoon lampooning the situation at the southern border and text which some critics view as inflammatory. For example, the term “illegals” is considered a pejorative to those opposing Trump’s attacks on Hispanic immigrants.

At the same time, there was evidence, at least among the hundreds of positive “likes” and comments on Hoffman’s Guns for Food Guys” page, that the flyer’s ridicule of undocumented immigrants and their advocates resonated with many people across the state. According to a Prospect man, ” The truth hurts to some snowflakes, don’t worry about it.” A Berlin machine tool technician said, “I thought it was awesome” and a Ridgefield woman commented, “Don’t apologize, it was funny.”

However, within a week the cartoonish flyer was removed and what one state leader called a “quasi-apology” appeared. However, by then the Hoffman posting had been shared at least 200 times and had attracted numerous comments that its contents were racist, disgusting, stupid, tone-deaf and “contained half-baked immigration views” that alienated the store’s customer base.

“Hoffman’s was hoping there’s no such thing as bad publicity, but I’m hearing they’re wrong,” said state Senator Matthew Lesser, who copied the cartoon to his Facebook page, denouncing it as offensive. “White supremacy and human trafficking are shameful stains on our society, not a cheap marketing gimmick,” said the Middletown Democrat, a former state representative who is a member of the legislatures Black and Puerto Rican Caucus.

Lesser, whose district includes Newington, said the Berlin Turnpike gun and ammo emporium  “heard from a ton of their own customers outraged that this business would engage in this kind of disgusting, racist advertising.” Moreover, he said, “I’ve heard from a bunch of customers who have said they intend to take their business elsewhere.”  These included Hispanic and non-Hispanics, he added.’

Within a couple of days, Lesser’s posting of the flyer had received almost two hundred positive likes and was shared nearly 140 times. The many comments were overwhelmingly critical of Hoffman’s and contained statements such as “never stepping into this store again” and “hope you idiots lose business.”

In addition, the state senator said, “Certainly the backlash from the community has been fierce because Newington is a welcoming community and not a place where this kind of behavior is normal or tolerated.”

The flyer’s most prominent element is a cartoon depicting the Statue of Liberty sporting President Donald Trump’s iconic blond comb-back haircut while holding a book that says national security. In the background is a verdant green landscape. Across a brick and barbed wire wall, a man in a multi-color Mexican-style serape looks north from the desert while carrying a crying emoji.

The flyer also states, “We want to find a pathway for illegals to legally purchase firearms so they can protect their family on their perilous journey to & from the border and to keep thieves away from their food stamps and all the other freebies that they so richly deserve.”

Meanwhile, Lesser and others placed the Hoffman posting in a broader context. “This disgusting behavior stems directly from the racist anti-Latino antics President Trump has normalized across the country,” the state senator said.

A related remark was made by Connecticut Attorney General William Tong, during a briefing on the state’s lawsuit against Trump’s emergency proclamation to build the border wall. He said that Trump’s “racist, hateful attacks” to immigrants and that “even the people here legally are afraid to go to work to the hospital … to church.”

Like several journalists, Lesser had sought an explanation from Hoffman about the controversial flyer and did not receive a response. The senator said,  But I did see Scott Hoffman (the store’s owner) posted a quasi-apology on his company’s Facebook page. This statement first thanked  “all the people that (sic) enjoyed and supported my cartoon on illegals,” and then adds, “it was not my intention to upset anyone ….”

This message did not sit well with Yanil Teron, executive director of the Center for Latino Progress in Hartford who called it insulting. “That isn’t an apology but a Trumpian statement applauding the racist base for laughing at a very offensive flyer, she said.

Teron also said that Hoffman is “promoting civil discord by thanking the customer base on supporting him on being offensive.” She asked, “Does the Hoffman crew laugh at concentration camps jokes?”

The flyer also took a jab at Connecticut’s two U.S. Senators, Richard Blumenthal, and Chris Murphy: “Hoffman’s Gun Center wants to join with the ever talking Senator Murphy & the distinguished veteran senator Blumenthal in helping our illegal’s in CT.”

Lesser and others also  debunked the core premise in the Hoffman’s posting that an “Illegal’s Freedom Pack,” consisting of flag-decorated gun and holster and ammunition would be available only to immigrants who have a Connecticut pistol permit and provide proof of illegal status.”