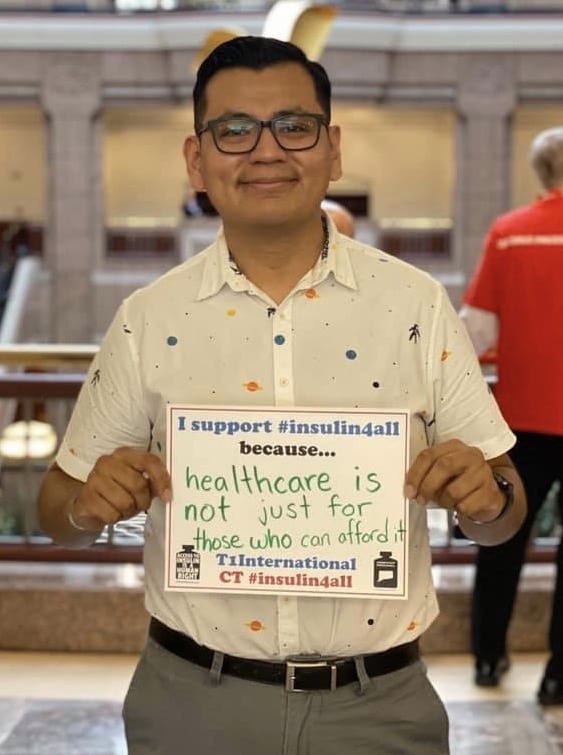 Jesus Morales Sanchez knows first-hand the problem of not being able to pay for his insulin or being able to get an emergency refill.

However, he is not the only diabetic in his family. His mother has been a Type 2 diabetic for 12 years. Morales recounted how his mother had been covered under her former spouses’ plan, but when they divorced she had to apply for coverage under the Affordable Care Act. But there was a two-week period before her new plan took effect. And during that time she ran out of insulin. Morales said they went to their local pharmacy and attempted to buy enough to cover her for the two weeks.  But the pharmacy would only sell a full box at a cost of $600 — an amount she could not pay out of pocket.

For those two weeks, Morales shared his own box of insulin with his mom.

But a newly introduced bill, SB 1, would prevent scenarios like this from happening.

SB 1, co-sponsored by Democrats from both chambers, would among other things, require licensed pharmacists to provide insulin, equipment, and supplies without prescription under certain circumstances. It would also expand the required health insurance coverage for diabetes medications and supplies. And it would cap the cost of insulin and non-insulin diabetes drugs at $50 per month.

“More than 350,000 Connecticut residents have diabetes, and if they need insulin or other medication, not being able to take it as prescribed can be fatal or lead to negative health outcomes.”

“In an AARP survey of Hispanic/Latino voters age 50 or older, 32 percent of respondents said they had not filled a prescription from their doctor because of the cost. This is unacceptable. Capping the price of insulin would be a good first step toward making sure that everyone in Connecticut can afford to take the medication they need to stay alive and healthy,” said Anna Doroghazi, associate state director, policy and advocacy for AARP CT.

AARP CT is supporting SB 1 and has launched the Stop Rx Greed campaign to support its passage.

According to the National Diabetes Statistics Report 2020, a periodical publication of the Centers for Disease Control and Prevention (CDC), among Hispanic adults, Mexican and Puerto Ricans had the highest rates of diabetes at 14.4 percent and 12.4 percent, respectively. They were followed by Central and South Americans at 8.3 percent and Cubans at 6.5 percent.

In Connecticut, the rates of Type 2 diabetes among Hispanics is 12.1 percent compared to 7.4 percent for non-Hispanic whites in the state, according to a 2019 study by the University of Connecticut School of Medicine.

SB 1 has strong support among the state’s legislators. Senator Matt Lesser said SB 1 will make sure that nobody in the state dies because they can’t afford insulin.

“That means establishing a $50 a month cap in insulin for people with insurance — and low-cost access to insulin and supplies for people who don’t have insurance or who are underinsured. That’s particularly important for immigrant communities — including many Latino residents,” Lesser said.

The cap on the cost of insulin would be a welcome relief for Sanchez.

Even with insurance, he said, “A significant part of my income goes into treatment.”

And being able to go to a pharmacy to get insulin in an emergency “can be literally a matter of life or death,” he said.

Sanchez believes more needs to be done to stem the rising cost of insulin.

With some products, if the price continues to increase people will simply stop buying it.

“We cannot afford not to buy insulin; the alternative is death. I don’t think people realize how vital it is, it’s like water, like air. Without insulin our bodies will start shutting down,” Sanchez said.

“People put profits over lives. In other countries, you can buy it (insulin) over the counter and it’s much cheaper. That shows that the real issue is greed. It is outrageous. It is cruel. It is immoral,” Sanchez said.

SUGGESTION: OPINION: No one should have to choose between buying food and taking their medication

CTLatinoNews.com (CTLN) has partnered with AARP Connecticut in the STOP RX GREED campaign calling on the public to take action and demand that elected officials take action to lower the cost of prescription drugs.

Now is the time to contact your elected officials and ask them to lower prescription drug prices. Click here to let legislators and the Governor know that Connecticut residents need affordable prescription drugs: https://action.aarp.org/site/Advocacy?cmd=display&page=UserAction&id=8253

In this article:AARP, Hispanics and Health, insulin