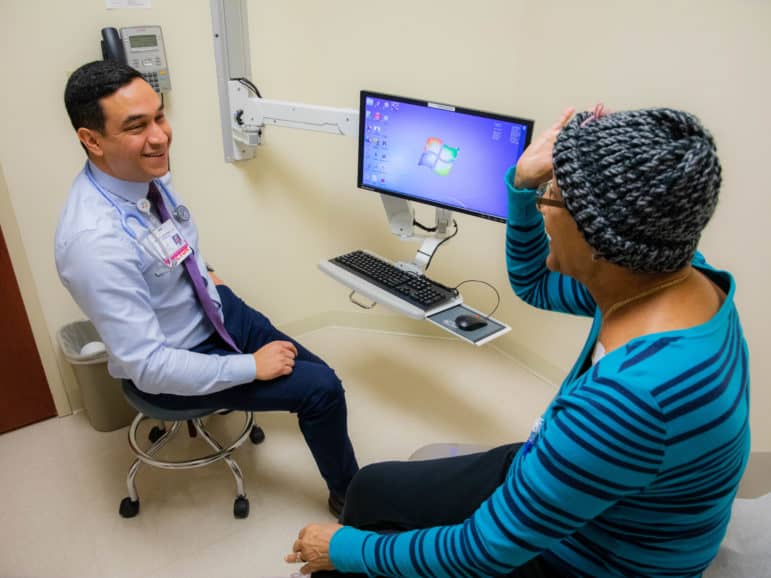 “Potentially preventable” cancer deaths plunged in Connecticut over the last decade, according to a federal study, with two rural counties, Litchfield and Windham, experiencing a nearly 49 percent decrease, the best in the nation.

Though cancer deaths fell overall in the United States, the trend in rural areas was not universal. In neighboring Massachusetts, for example, preventable cancer deaths rose in non-metropolitan areas.

“The disparities were quite stark,” said Dr. Macarena Garcia, a senior health scientist with the Centers for Disease Control and Prevention (CDC) and lead author of the study.

In general, cancer patients in rural areas, where residents tend to be older, sicker and poorer, die sooner than urban dwellers, Garcia noted. But in Connecticut the numbers have declined each year, falling to “zero percent” of “excess” deaths in 2017, according to Garcia.

“The trend in Connecticut is not happening at random. It is statistically significant,” she said. “Whatever happened from 2012 onward is working.” She cited early prevention and detection efforts, as well as timely and targeted treatment and post-treatment care, as likely factors.

One expert, Dr. Peter Paul Yu, who is physician-in-chief at the Hartford HealthCare Cancer Institute, credits declining cancer deaths nationwide to “the explosion of science,” which is unraveling why a normal cell becomes a lethal, cancer-producing one. He also points to “an explosion in new therapies” that deliver targeted medicines to a compromised immune system.

But perhaps just as important in rural areas is delivering specialized care “over that last mile, to where people need it,” he said. “Then you really begin to see the transformation.”

When he leaves his downtown Hartford home for Hartford HealthCare’s newest institute branch, the Foster Oncology and Infusion Center in Windham, Dr. Alvaro Menendez sets his GPS to avoid interstate highways—the better to get to know his new home state. On this cold winter Monday morning, Menendez drives along sleepy Route 6 East, through Bolton and into Andover, passing the occasional farm, the white horse fences, tall pines, frosted grass, and a white-steepled church. Sun peeks through the pines by the time he reaches quiet Columbia. Then the landscape transforms into gritty, gray Willimantic. Menendez passes the Housing Authority projects and the Dollar Tree store and heads up the hill to the new institute building.

Menendez, who is 34, is a breast cancer specialist and native Spanish speaker who was born and attended medical school in El Salvador, where his parents are physicians. He works Mondays at the institute where, by design, most patients will either have breast cancer or be Hispanic. On Tuesdays, a different specialist presides, Dr. Rawad Elias from Lebanon, an expert in geriatric oncology. On Wednesdays, Dr. Sope Olugbile, a lung cancer specialist from Nigeria, sits in the doctor’s chair. On Thursdays and Fridays, different specialists again, supported by the same nurse practitioner and office staff.

“The Institute” is a lofty name for this little brick building overlooking Windham Hospital. What the building lacks in size, it packs in punch. A lab in the back runs blood work prior to each appointment, providing results in nine minutes, versus sending samples out somewhere and waiting for results. Patients walk their prescription slips over to an in-house pharmacy, eliminating the need to drive elsewhere. A bright and comfortable chemo infusion center provides private bays. Patients and loved ones park for free in the spacious lot. The center, which opened in 2018, replacing drab digs in the basement of Windham Hospital, serves about 50 patients per day.

What visitors don’t see is the strong network behind the Willimantic building and others like it in Avon, New Britain, Manchester, Torrington, Meriden, Norwich and more. In 2014, Hartford HealthCare became the first member of the Memorial Sloan Kettering Cancer Alliance, providing the Hartford-based group with Memorial Sloan Kettering’s services, expertise and clinical research trials.

Yu came along in 2016, wooed from the Palo Alto Medical Foundation. Yu and crew recruit specialists “who bring something extra to the table” when it comes to accessing care. In Menendez’s case, it was his work creating breast-screening outreach programs to underserved communities.

Foreign doctors who do their residencies and fellowships in the United States—Menendez did his residency at Brown University and his fellowship at Indiana University—must return home for two years before starting a permanent job here. If they wish to stay in the United States, however, they must obtain a visa waiver. Under the federal Conrad 30 J-1 Visa Waiver program, each state can select up to 30 foreign-born physicians to work in an underserved area or with an underserved community. Applicants need to have a job lined up before they apply, and they have to commit to staying for at least three years.

Menendez wanted to stay. He sought a job with a strong mentorship, and the opportunity to develop his community-based “minority oncology” specialty. In 2018, he was offered four jobs. Landing one in Connecticut followed the institute’s last-second dash with his immigration paperwork, job contract and J-1 waiver application to the state Health Department door, just in front of another applicant. Menendez received waiver No. 30 of 30.

Delivering specialized care “over that last mile, to where people need it,” is important. “Then you really begin to see the transformation.”

But he did. Menendez appreciated Hartford HealthCare’s community efforts, such as its mammography van, nurse navigators, transportation to treatment, home care visits from nurses. Even the personal calls to confirm appointments. Stephanie Valentin, the Spanish-speaking oncology coordinator in Willimantic, calls patients in the morning to remind them to come in for their chemo.

“Community outreach already existed here, so I didn’t have to create it from scratch,” Menendez said. “There’s days when this looks like a little Hispanic clinic.”

Maria Tapia, 72, was shopping at Walmart in September when a dizzy spell sent her to the floor. An ambulance rushed her to Windham Hospital, where an MRI revealed a lung tumor. Doctors recommended treatment, but Tapia, who moved to Willimantic in 2006 from her native Puerto Rico, was having none of it. A mixture of fear and confusion kept her away, she said. Once she met with Menendez, she changed her mind.

“You speak the truth,” she said to him in Spanish during a recent Monday appointment at the institute, as the pair discussed Tapia’s chemo and radiation treatment and explored side effects during her next phase. Menendez wrote the name of her new drug, durvalumab, on a whiteboard in case Tapia or her daughter wanted to take a picture of it. Menendez requested the board when he began the job because he knew that writing out information helps patients remember details.

Following her appointment and during her chemo infusion, Tapia said in Spanish, “It’s easier to express yourself with him. You understand each other, and there’s no confusion.”

The drug dripping, Tapia’s daughter turned to her mom. “See you in a bit,” she said. Home was just 10 minutes from the institute, close enough to check on the kids and then come back.

Education, Across All Demographics, Is An Effective Prescription To Combat Diabetes