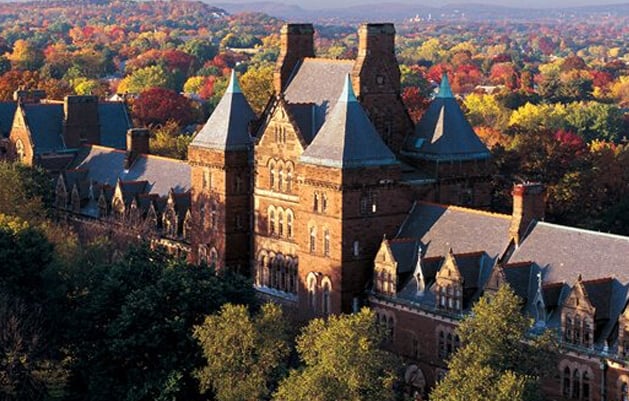 Connecticut’s more than three dozen colleges and universities, like many of their counterparts nationally, have witnessed a sizable increase in students with Hispanic roots, a trend that is is represented in Connecticut with six schools having achieved Hispanic Serving Institution status in the last academic year as compared to four two years ago.

The primary reason the U.S. Department of Education established the HSI designation to qualify not-for-profit schools with a fulltime equivalent enrollment (FTE) that is at least 25 percent Hispanic for a limited pool of targeted federal grants.

An ancillary outcome has been that the annual list of HSI qualifiers provides an unofficial indicator of the progress of Hispanics in higher education and, to some extent, where they are on track to obtain a four-year degrees, an accomplishment where they lag behind whites and African Americans.

Five of the state’s HSI schools are two-year community colleges according to the data curated from federal sources by Excelencia in Education, a Latino education advocacy group, that annually releases a list of HSI qualifiers and “emerging” institutions with an Hispanic enrollment of at least 15 percent.

The growing Hispanic enrollment at mostly urban-based community colleges can be viewed two ways. It is a sign that more members of this community are finishing high school and pursuing higher education and career preparation; the downside is that historically many of these students for various reason do not continue toward a four-year degree.

However, the sixth HSI qualifier is the University of Connecticut’s Stamford branch, an institution that offers various four-year degree programs to its students who primarily come from Fairfield County, including heavily-Latino Bridgeport and Norwalk.

Having first attained the 25-percent HSI threshold in 2016-17, the Hispanic enrollment continues to trend upward, reaching 27 percent in the current report. One reason for this growth, according to Terrence Cheng, director of the Stamford campus, is because the UConn branch provides educational opportunities that interest “21st century students with diverse backgrounds.”

Cheng said the urban campus’s selling points include “marquis programs” in digital media and business. Hispanic students recognize these areas of study will make them more valuable in the job market and enable them to become future social and economic leaders, Cheng said.

“We are now a destination campus, a place where students come to stay four years,” Cheng said, adding that fewer students transfer to UConn’s main campus at Storrs than in the past. “Students who may not have the option of going to Storrs can experience UConn closer to home.”

While UConn at Stamford is the only four-year HSI qualifier in Connecticut, the recent Excelencia in Education report lists several “emerging” institutions. These include the UConn branches in Waterbury (18.8 percent Hispanic) and Hartford (18.5 percent) are approaching  HSI status as are two private four-year colleges, Bridgeport University (22 percent) and Goodwin College (24.7 percent) in East Hartford.

Goodwin already is considered an HSI campus by the metrics used by the Hispanic Association of Colleges and Universities.

The state’s top-tier universities, Yale, Wesleyan and UConn at Storrs also have reported that their Hispanic enrollment also is increasing but still falls a few points short of emerging HSI status.

National studies by the Pew Research Center and Georgetown University have found that more Hispanics are attending college than ever and the percentage of four-year graduates is improving but still significantly less than that for whites and African-Americans. Georgetown determined that 21 percent of Hispanics have at least a bachelor’s degree compared to 45 percent of whites and 32 percent of blacks.

Among the issues that cause a disproportionate number of Hispanic to drop out short of obtaining a four-year degree is a sense of not  “belonging” on college campuses and insufficient financial aid advice and access that often leads to attendance at the more affordable community college. The latter often means the  end of the higher education trail for many Hispanics, as well as other students from less affluent minority groups, who are under pressure to financially assist their families.

At the Stamford campus, 45 percent of its undergraduates are the first generation of their family to attend college, Cheng said, and one way the University of Connecticut seeks to help students from non-traditional backgrounds is through its Student Support Services program. “We are continually looking for ways to pilot new programs to help retention,” Cheng said.

There also is a Latinx Student Association at Stamford which enhances Hispanics college experience.

Nationally, there are indications that the dropout factor is decreasing although it may take longer than four years for Hispanics for earn a degree. The National Student Clearing House Research Center found that the completion rate for Hispanic students who started at four-year public institutions increased 8.3 percentage points, from 55 percent at the end of six years (2016) to 63.3 percent at the end of eight years (2018). This was the sharpest completion increase of any race and ethnicity group, the report said.

A less positive note is provided by evidence that the financial impact of the federal HSI program remains limited if not inadequate.

According to the Integrated Postsecondary Education Data System, HSI schools in 2016-17 on average received $3,117 per student from federal revenue sources, compared to $4,605 per student for all degree-granting institutions.

Moreover, while the federal funds allocated to schools serving this minority population is not on the Trump Administration’s current hit list for elimination, the proposed allocation has remained static, while the HSI qualifiers continue to grow.