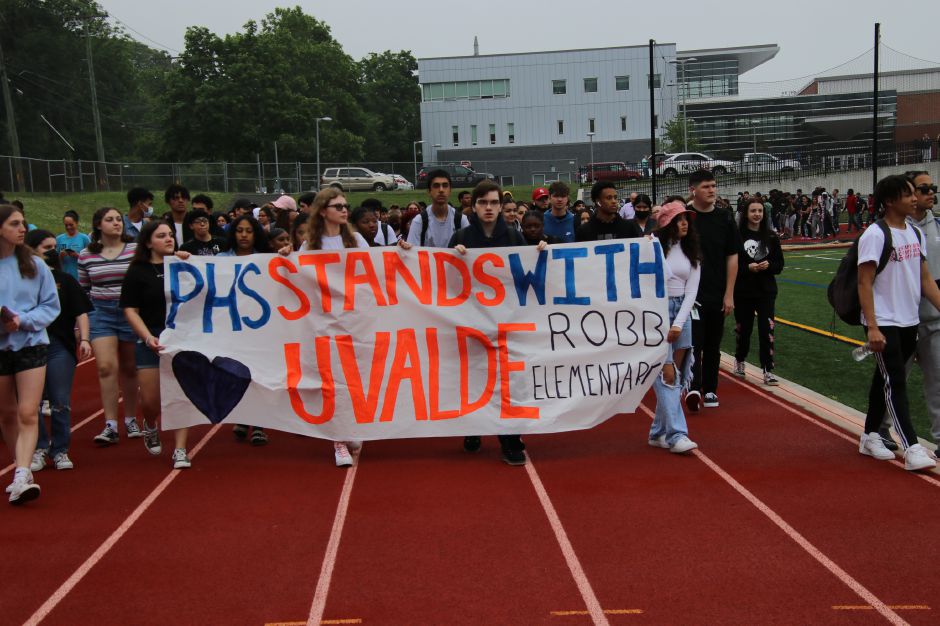 Platt High School students in Meriden during the walkout on June 2 to protest gun violence. Photo contributed by Daniel Corsetti.

Several Maloney seniors organized a walkout on June 1 and three Platt students, including Junior Jocelynn López, hosted their walkout the following day. Students reflected on how the May 24 shooting has impacted Latino communities across the country.

“Being Latina myself, it was hard to hear that my community was hurt and is suffering during this difficult time,” López said. “Us Latinos stick together, and if one is hurt, then we all hurt and this felt like it hit so close to home.”

López also pointed out that Platt has a diverse student body. About 60 percent of Platt students identify as Latino while Latinos make up around 90 percent of Robb Elementary School’s student population, according to Record-Journal.

“When Sandy Hook happened, we were in second grade, and I remembered my parents pulling me into their room to talk about it,” said Mikayla Bunnell, another organizer of the Platt walkout. “But this is different because we understood the gravity of the situation and now that we’re older we can be activists in our community.”

Publisher’s Notes: This story is an aggregate from the Latino Communities Reporting Lab.