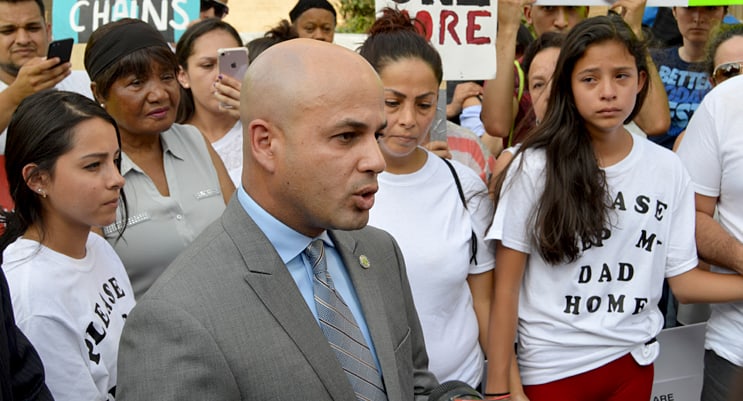 Miguel Castro is man on a mission. The Meriden council member, who describes himself as an American born in Puerto Rico, wants his hometown of 25 years and the state of Connecticut to become national models for equitable treatment of all people, including undocumented immigrants, who he says have been victimized by flawed and unfair immigration policies.
Over the past two years, this quest has taken the 49-year-old Democrat to numerous rallies and protests at courthouses, state and federal offices to campaign for better treatment of immigrants, especially those who are longtime, contributing members of their communities, some for over 20 years, but have run afoul of the system and now face imminent deportation and separation from their families.
Castro also has spoken about justice for immigrants at town meetings, supported immigrant advocacy groups such as Unidad Latina en Accion and participated in vigils at Meriden and New Haven churches, which had become sanctuaries for immigrants ordered by federal authorities to report for deportation.
“Miguel has become a big advocate (for immigrants) around the state and people have recognized him for that,” said state Rep. Hilda Santiago, who has served as a mentor and inspiration for Castro’s local political activism and has supported his efforts to help undocumented immigrants.
“He is a person who believes in justice being done,” the Democratic legislator said, and is especially supportive of immigrants who have been here a long time and often “through no fault of their own, did not get proper papers.”
Santiago said Castro, who is a college degree in theology, is “passionate” that these people be given a chance to partake of the liberties available in this country.
Castro, who runs a local construction firm, recognizes that while local activism has helped several undocumented immigrants caught in the deportation net to remain in this country, at least temporarily, ultimately it is up to the U.S. Congress to fix what he describes as a broken system that contains “dog whistles” that often target non-white immigrants.
“We need major reforms to replace policies that embrace segregation, discrimination and over-reach of power,” Castro said. “This demonizing and criminalization of immigrants has to come to an end,” he said.

Despite the key being action in Washington, D.C., Castro says town and state officeholders have an important role to play. “We have to locally legislate to protect members of our community,” he said. “My job is to listen to my community, to come up with solutions that are bipartisan and collective,” the councilor said.
Recently, Castro’s pro-immigrant endeavors brought him statewide and even national notoriety. He was arrested Dec. 13 outside the Meriden Superior Court and charged with assaulting public safety officers and rioting after two judicial marshals alleged that he had attacked them while they attempted to disperse a crowd of about 15 protestors. The city counselor said the charges are unwarranted and unjust.
Castro and members of Unidad Latina en Accion were protesting the judicial marshals’ detention of an undocumented New Haven man without a federal warrant and the presence of ICE agents who apparently had been alerted that the immigrant was being held in the courthouse and took him into custody to the surprise of family members who hoped to bring him home that day.
At a recent hearing, the court granted Castro’s request to move his case to Milford Superior Court. He expects to be exonerated and to subsequently look into the issues raised by the judicial marshals treatment of immigrants.
What happened at the Meriden courthouse added impetus to immigrant rights activists’ push to have the state’s Trust Act tightened. Under the act’s current provisions, state law enforcement and the Department of Correction should not honor requests by U.S. Immigration and Customs Enforcement to detain someone. However, there are apparently loopholes that some state authorities have used to help federal agents more easily detect these potential deportees.
Rep. Santiago, a member of the Democratic majority in the state House, said she expects to look into legislation to strengthen the Trust Act during the current session.
Castro’s support of undocumented immigrants has not gone unnoticed among the other individuals and organizations leading the charge for improved immigrant rights. This group includes people such as Meriden resident Jason Ramos, whose parents were threatened with deportation to Ecuador in 2017 despite living in this country since 1993. Ramos, acting independently, has been active in pro-immigrant efforts and has worked in the past for the Ecuadorean Consulate in New Haven.
“We see Miguel at different events,” Ramos said. “He is a person who finds his role and helps in different capacities, but does not ask for attention.”
Castro’s contributions are often in the background, Ramos said, he has “served as a conduit for getting help” to families who have been forced into sanctuary while efforts to stay their deportation wind their way through the immigration bureaucracy and courts. “Miguel is a big help in coordinating resources, Ramos said.
Jesus Morales Sanchez, an organizer for ULA, recalls that Castro stepped up in 2017 to help Marco Reyes, an Ecuadorean who had entered the U.S. illegally in 1997 and had been living in Meriden with his wife and three children. Reyes had been ordered to return to Ecuador in 2009 but he was granted stays, which apparently had run out and he had taken sanctuary in a Meriden church.
“We invited him to help,” Sanchez said, because of his position in the community. “He has become a good ally and a huge advocate on his own and genuinely concerned,” the New Haven resident said, adding that he regularly attends cultural and fund-raising events.
While many of those directly aided by ULA are Latinos, Castro and other advocates also have helped families from Indonesia and Pakistan during the last year.
In Meriden, the council’s support on immigration issues has been limited. The city, where he estimates at least 2,000 undocumented immigrants live, has not become a sanctuary city like New Haven.
“The closest we have come,” the councilor said, is a letter of bipartisan support for Nellie Cumbicos, an 18-year resident of Meriden who faced deportation to her native Ecuador last February.
Eventually, customs officials granted Cumbicos a reprieve, which according to then Congresswoman Esty, will allow her to stay with her husband and son, both U.S. citizens, for the foreseeable future.
Castro said some elected local officials have been reluctant to take up the subject of immigration reform despite his urgings that “we are here to protect the vulnerable in our community.” In some cases,” he said, they do not want to leave their comfort zone and “rattle cages.” He added, “They shy away from a reality that is going to grow.”
The Democratic officeholder also has his political opponents, some of whom suggested he should resign after his recent arrest. His response is a challenge: “I have (been arrested) for what I stand for. What do you stand for?”
Bill Sarno/CTLatinoNews.com