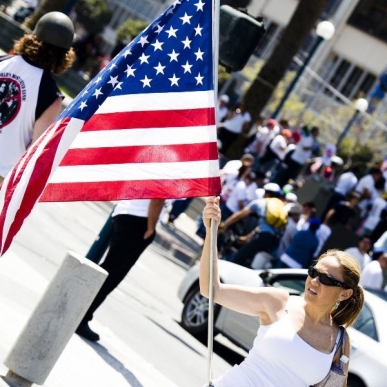 The United States government has been deporting large numbers of undocumented migrants as of late, and the majority of them are Latino. In addition to negatively affecting the individuals removed from the country, this policy also affects many people who remain, such as US-citizen family members. Drawing on a study of U.S.-born Latinos who are the children of immigrants, Michael Jones-Correa, Alex Street and Chris Zepeda-Millán find that when young Latino citizens become aware of the Obama administration’s deportation policies, they view the Democratic Party as significantly less welcoming. Given that partisan attachments formed by young adulthood tend to persist through voters’ lives, this suggests that current deportation policies have the potential to alienate Latino voters from the Democratic Party for decades.

In the first five years of the Obama administration, U.S. Immigration and Customs Enforcement (ICE) issued removal orders to nearly two million people, at a rate 1.5 times higher than the average under President G. W. Bush.* Many of those deported in recent years have strong ties to people still living in the U.S., such as their U.S.-citizen children. The ongoing policy of mass deportations is reconfiguring a significant portion of American society, both by excluding people who were once residents and by re-shaping the families and communities that remain.
There are about 33 million U.S.-born children of immigrants living in the United States today. Around 9 million of them live in mixed status households, along with one or more undocumented migrants. Most, though not all, of these young Americans are Latino. We surveyed a national sample of 1,050 young (18-31 year old) US-born Latinos whose parents were born in Latin America. This group is ideally suited for studying the long-term implications of mass deportation policies on the future of Latino, and, ultimately, American politics.
Consistent with Latino Decisions findings on this topic, many of the U.S.-born Latinos in our sample have close ties to undocumented residents or people who have been deported: 21% report that a close (5%) or more distant (16%) family member has been deported. This figure rises to 27% when we include friends. In addition, 46% have at least one parent who lived for a period as an undocumented migrant in the U.S. In addition to the close connection, survey participants were heavily in favor of regularization for undocumented migrants and 72% agreed with the statement, “Do you think how undocumented immigrants are viewed by the general public also affects how U.S.-born Latinos are viewed?” The latter finding suggests that U.S.-born Latinos may perceive policies targeting the undocumented as attacks on themselves as well.
To read the full story:  http://www.latinodecisions.com/blog/2014/05/19/mass-deportations-are-alienating-young-latino-voters-from-the-democratic-party/