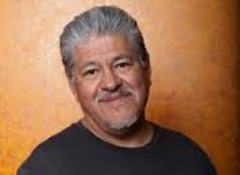 Growing up in poverty in South Central and East Los Angeles, Luis J. Rodriguez says he found himself so emotionally empty that he joined a gang at age 11. He started abusing heroin by 12, and by 15, he was put in juvenile hall and later jail. It was his love for books, however, which turned his life around.

At 60, Rodriguez is an award-winning poet, author, and founder of a cultural arts center which helps youth in the San Fernando Valley stay away from gangs. This month, he was chosen by Los Angeles Mayor Eric Garcetti to be the city’s second Poet Laureate, succeeding Eloise Klein Healy.

“I thought, they’re probably not going to pick me,” said Rodriguez, who was one of approximately 30 applicants. “I was quite amazed. I also understand the responsibility. I want kids to recite poetry. I’ll do anything to get poetry exploding in Los Angeles.”

Rodriguez will be getting an office in the same Central Library where he had once found refuge from the gang world four decades ago. The same peaceful place where he would escape gunshots and spend hours hours reading will now be where he writes poems for his city.

“In the end books saved my life,” said the man who has written 15 of his own, including his most recent memoir, “It Calls You Back: An Odyssey Through Love, Addiction, Revolutions, and Healing,” a finalist for the National Book Critics Circle Award. He is well known for his memoir, “Always Running: La Vida Loca, Gang Days in L.A.“

Rodriguez remembers before he was aware of the power of books, the most eminent force in his life were the gang members who surrounded him.