On her Twitter page, Nivea Torres has uploaded a photo that shows her wearing a pink hardhat, apropos of her current job as  superintendent of the Connecticut’s technical school system.  Many of the state’s Latino leaders are hoping that this page will be updated soon and that Gov. Dannel Malloy will give the Puerto Rico-born Torres a new hat, that of state commissioner of education.

“We hope Latinos … Latinos who are qualified … will receive consideration for commissioner and deputy commissioner positions as they open,” said Joseph Rodriquez, chairman of the Connecticut Hispanic Democratic Caucus.
According to the CHDC, the Latino members of the legislature’s Black and Latino Caucus and the nonpartisan state Latino and Puerto Rican Affairs Commission (LPRAC), Torres is the best choice to head the Connecticut Department of Education.
This appointment would represent an important landmark for Latinos and might might ease their disappointment with Malloy’s first term, when there was an expectation that more Hispanics would be appointed to high positions in his administration and more attention would be paid to cities such as Bridgeport which were pivotal in his election.
Hispanics only received a handful of these jobs, Rodriguez said. This time, Latino leaders are tending to downplay their expectations but still are eager for greater participation in the Malloy administration.
“It is my experience,” said Bridgeport Town Clerk Alma Maya, “that if you don’t have a Latino in the room during these discussions we are forgotten.”
Malloy has indicated he is willing to sit down with Latino leaders, such as Rodriquez, Werner Oyanadel of LPRAC and state Rep. Juan Candelaria, the chairman, and other Latino members of the Black and Latino Caucus to discuss issues of importance to the Latino community.
Moreover, the governor “is keenly focused on increasing diversity among cabinet-level and other appointed positions,” reports spokesperson Samaia Hernandez.
While significant, the education appointment is only one piece of the pie, according to Rodriguez.  What  is as important, said Rodriquez is that the governor will continue to drive through policies that are important to Hispanics, particularly during next year’s budget struggle.
Among their priorities, say Latino leaders, is that the Malloy administration ensure that municipal aid is not cut, that efforts will continue to close the racial and ethnic gaps in Connecticut public education and that there will be adequate financial support for the Latino-based nonprofit agencies and state departments that care for the state’s most vulnerable population.  Even a small reduction in the money earmarked to the nonprofit programs could jeopardize their sustainability, said Oyanadel, LPRAC’s executive director.
Malloy can help Latinos by helping the cities, such as Bridgeport where many Latinos live, Maya said. This would create is a ripple effect which eventually benefits the entire state, she said.
“We want him to appoint more Latinos, for all of us down here,” Maya said. The  Bridgeport town clerk added that she has not seen a real commitment to her city since Lowell Weicker was governor from 1991 to 1995.
In 2010, after Malloy won a narrow victory with the overwhelming support of the state’s Latinos, there was an expectation that he would bring Hispanics into the top levels of his administration and do more for urban areas. “We were owed last time,” said Maya.
Among the most salient of the first-term appointments was Victor Diaz of Waterbury as deputy commissioner of the Department of Motor Vehicles, a position he resigned recently due to legal issues. In addition, Gerry Garcia of New Haven became chief of operations for the Department of Consumer Affairs and Fernando Muniz of Bridgeport was appointed deputy commissioner of the Department of Children and Families.
Malloy also named Carmen Espinosa as the first Hispanic justice on the state Supreme Court and Estela Lopez was appointed to the state Board of Education.
Now, Latino leaders are hoping to see at least one Hispanic in the governor’s cabinet, something that has not happened since Dr. Joxel Garcia served as commissioner of  public health under Gov. John Rowland from 1998 to 2001.
As to who is being considered for the education slot recently vacated by Stefan Pryor, the governor’s office indicated that as a matter of course it does not comment on these matters. What is known, however, is that Meriden’s former mayor and Superintendent of Schools Mark Benigni is seeking the job.
Malloy has stated he is committed to select “the best candidates” and Torres  is an exceptional education leader and the right person to take on the challenges faced by public education, say her supporters.
“She is doing stellar work as superintendent of the vocational schools,” Rodriguez said.
Torres’ resume includes a doctorate in curriculum and instruction and extensive experience, both at the teacher and principal level and as well as a district-wide and state administrator.
“There is no need to put this position out for a national search,” Rodriguez said.
In this article:ct education commissioner, Governor Malloy and Latinos, Nivea Torres 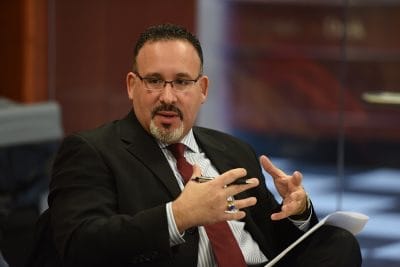 Bloomfield superintendent out, Meriden administrator expected to be tapped