Larry Green
CTLatinoNews.com
Every year, Centro de la Comunidad in New London coordinates with local health organizations to supply low cost, or sometimes free, flu shots to employees, clients and the general public, according to Executive Director Elizabeth Garcia Gonzalez.
She finds that some people are leery about receiving the shots. “We have the nurse provide information, but some feel uncomfortable,” she said, “It’s more of the middle-age and older adults that don’t take it.”
Gonzalez is also planning informational presentations about vaccinations for clients in hopes to alleviate any fears. “They fear that if they take the vaccination, it may make things worse,” she said. One employee at Centro de la Comunidad was instructed by her doctor not to take flu shots because she would have a serious reaction, she noted.
Despite these concerns, nationally Latinos are mostly on par with the general population when it comes to being vaccinated, however, there are some differences between demographics. State residents, on the other hand, display marked differences with some vaccinations.
For Latino children, the statistics are positive. “There are no disparities in childhood vaccination coverage for Hispanics as compared to non-Hispanic whites, and actually rates for Hispanic children are higher for some vaccines,” said Michelle Basket, a researcher at Centers for Disease Control and Prevention (CDC), referring to their 2011 data on 19 to 35-month-old children nationwide. She added,”For most recommended vaccines, Hispanic children living below the poverty level actually have higher rates than their white and black counterparts.”
But the data on Latinas receiving vaccinations for HPV, which is the most common STD in America and can cause cervical cancer, indicates reluctance by some in the past to take this preventive step. However, the trend may be changing.
In 2011, the federal Health and Human Services (HHS) reported that “Hispanic women are 30% less likely to receive an HPV vaccine, as compared to Whites.” Fox News Latino has reported more recently that, “Latino teens are emerging as more aggressive than their counterparts when it comes to taking the initiative to get the vaccine.”
However, Researcher Dr. Abbey Berenson said, “There are still a significant number of parents who are concerned about the safety of the vaccine.” She and her colleagues at University of Texas Medical Branch say that HPV vaccination rates in America are low overall, although the vaccine has been proven to provide immunity against HPV-related cancers, particularly cervical cancer.
In other areas, such the 4+DTaP immunization, which is a combination vaccine protecting against diphtheria, tetanus, and whooping cough, the CDC statistics narrowed to Connecticut children ages 19 to 35 months showed that 93.5 percent of White non-Hispanics received the vaccinations compared to 80.8 percent of Hispanics. The U.S. average was 84.6 percent.
The disparity is especially noteworthy for the Latino population as the CDC warns that whooping cough is on the rise.
For more information, visit http://www.cdc.gov/vaccines/default.htm
(Photo by USACE Europe District via Flickr)

In this article:Center for Disease Control, Latino Health, Latinos and Vaccinations, Vaccinations 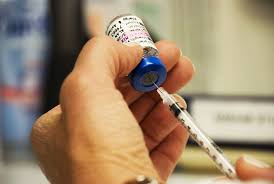 School-by-school immunization data released by the state’s Department of Public Health (DPH) from the 2018-2019 school year, showed there were 134 schools where less...

A remarkable thing happened since Anthony Petruccelli first got elected to represent his hometown of East Boston in the Massachusetts House 17 years...