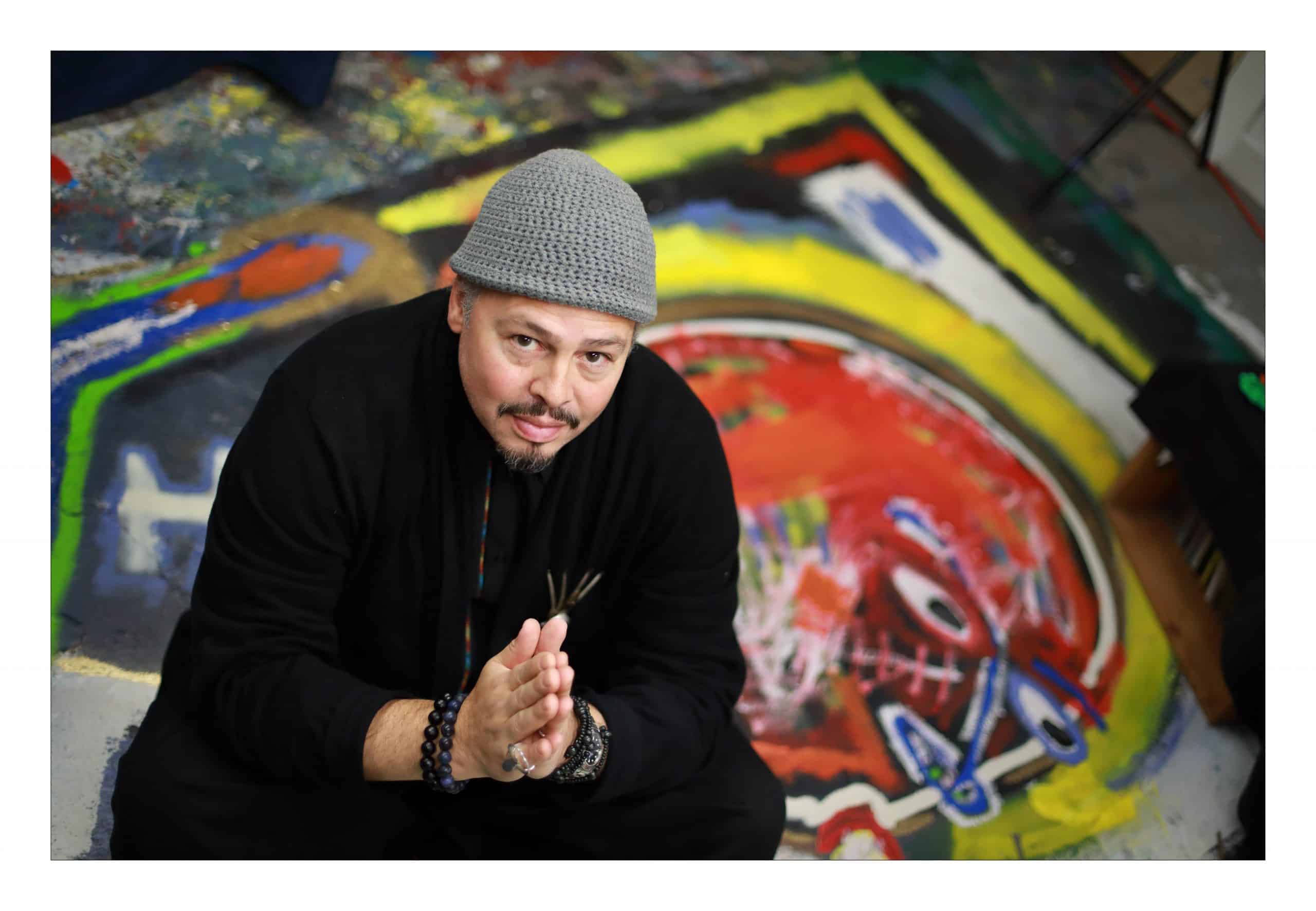 Andres Chaparro first heard jazz music when he was 13 years old. As he whimsically flipped through radio channels one night he stumbled across the song “Love Supreme” by John Coltrane. It was as if, at that moment, Chaparro was struck by lightning. His life would never be the same.

“At the time I wasn’t sure what kind of music it was,” recalls Chaparro, “but I felt the connection. Jazz has touched my soul; it has warmed my heart and has moved me to tears. I cannot envision my life without songs like Billie Holiday’s ‘Strange Fruit’, John Coltrane’s ‘Alabama’, the music of Nina Simone, Billy Harper, Miles Davis, Thelonious Monk, Roy Hargrove, Dizzy Gillespie, Eric Dolphy, Jackie McLean, Ray Barreto, Albert Ayler, and this list goes on and on … I think there is a sense of freedom and liberation I feel with jazz music. It is a spiritual experience for me and one which fuels my work.”

Chaparro isn’t a musician, although he is inspired by them. Chaparro is an artist, a painter. Utilizing oils, markers, crayons, pencils, spray paint and found objects, he creates paintings that are interpretive, incorporates jazz-related visual elements and evokes powerful emotions. And on Thursday, Sept. 19, Chaparro will be discussing his work and why he created it in an hour-long Art Talk sponsored by Western Connecticut State University.

“I recently had the honor to curate a major exhibition, which runs August 26 through October 6, 2019, entitled American Subtitles at Western Connecticut State University’s Visual & Performing Arts Center Gallery,” Chaparro explains. “The exhibition features my mixed media paintings and collage artwork as well as 14 pieces of artwork by sculptor Robert Charles Hudson. I will be discussing my work in the exhibition, works which interpret the American experience of people of color. Both Robert and I share a common passion for our artwork to invite and challenge viewers to re-examine social crises from a fresh perspective. The show strives to inspire the viewer to explore their own individual contributions to humanity while embracing visions of both unity and diversity in a very honest way. There is a painting in the exhibit entitled ‘Strange Fruit’, which was inspired by Billie Holiday. The painting is part of a series of work I created entitled the ‘Unmarked Graves Series’, which concentrated on lynchings in America. My talk will be more about why I created my work than about how I created it.”

Chaparro creates his work tucked away in his studio in Windsor, Conn. He was born and raised in Hartford with parents from Puerto Rico and says that being bi-cultural has had a profound influence on his life. “I have always connected to my Puerto Rican roots and my parents made sure that my siblings and I spoke the language and were proud to be Puerto Rican,” says Chaparro. “I was raised speaking two languages and my father was an avid music listener, which instilled in me a deep appreciation for music. It was these early experiences that help shape and value my cultural awareness and appreciation for music that morphed into creating artwork that is culturally sensitive with a passion and love for jazz.”

While Chaparro would doodle and sketch as a child growing up, he didn’t start creating paintings and artwork until later in life. It was in the 1980s when he was living in New York that he created his first painting depicting John Coltrane. “I ended up gifting that painting,” he recalls. “I wish I could revisit that piece of art. I am not sure where it ended up.”

Hopefully whoever has this first painting, holds onto it, as Chaparro’s paintings are widely sought after now. Chaparro says that he believes people have embraced and collected his artwork all over the world due to its universal language of jazz and his ability to transcribe that onto the canvas.

The road Chaparro took to becoming an artist wasn’t a conventional one. Although he always had an affinity for art and music at an early age it wasn’t until he was an adult that he really started creating artwork. And now … he can’t imagine doing anything else.

“I love creating artwork,” says Chaparro. “I started painting because of a burning desire and passion to create art. I didn’t start out to necessarily make a living as an artist though. I worked in the retail/fashion industry and social services before becoming a full-time artist. I think working and having a career outside of art worked for me. It gave me certain stability that allowed me to create unapologetically. I learned to create from the heart, and what I felt with disregard for aesthetic beauty. It was more about feeling and the pursuit of laying that onto the canvas. This freedom would shape the direction and style of my artwork.”

It wasn’t until his first exhibition that Chaparro really started to believe he could actually make a living as an artist. Before then, he had never given it much thought. He says it was more about creating and not selling, but once he realized how much interest there was in purchasing his work … he realized it was a possibility to be a professional artist.

“My advice to young Latino artists is to be authentic and honest with your work. We as Latinos come from different experiences and backgrounds—embrace and value that and create from your heart. Do not compare yourself with other artists, continue to grow intellectually, spiritually and emotionally and reflect that in your artwork. Be fearless and unapologetic and use your talent and feelings to find your voice.”

Chaparro speaks to the younger generations of Latino artists because he says that although he feels sometimes Latino artists are on the outside looking in that Latin American artists are more relevant today than ever before. Chaparro believes there will soon be a rise in all genres of Latino art because of the growing Latino population in the country and abroad and because of a need for cultural sensitivity and understanding of origins of Latinos, which will inherently make the artwork more accessible.

“I think one of the most beautiful things about America is our diversity,” Chaparro goes on to explain. “It is our most precious resource that we have not embraced as a country. We have not realized our potential as a nation. There is much divide and hate that still plagues our nation. I think we could all agree that race is still a polarizing issue in America and American Subtitles is an example of a collection of artworks that cries for change, growth, and unity. It is important for me as an artist to reflect and interpret these conditions in hopes that it inspires healthy dialogue and perspective on inequities that exist in our communities across America. If we are to master our existence and make this ‘American experiment’ work, then collectively we must all do better.”

Chaparro has participated in more than 60 solo and group exhibitions across the Northeast and his works are held in numerous private and public collections. He has held artist residencies at the Montclair and New Haven jazz festivals and his images of Ralph Peterson and Aggregate Prime were featured at the 2017 WCSU Jazz Fest. He received the SBNO Greater Hartford Arts Leadership Award and the Maria C. Sanchez Arts and Culture Award and earned a nomination for the Latino de Oro prize in arts and culture. His works have also appeared in the Crooks Press book “Making the Cut: The World’s Best Collage Artists.”

Admission will be free and the public is invited. Learn more about the event and register here.
Artist: Andres Chaparro, www.chaparroart.com