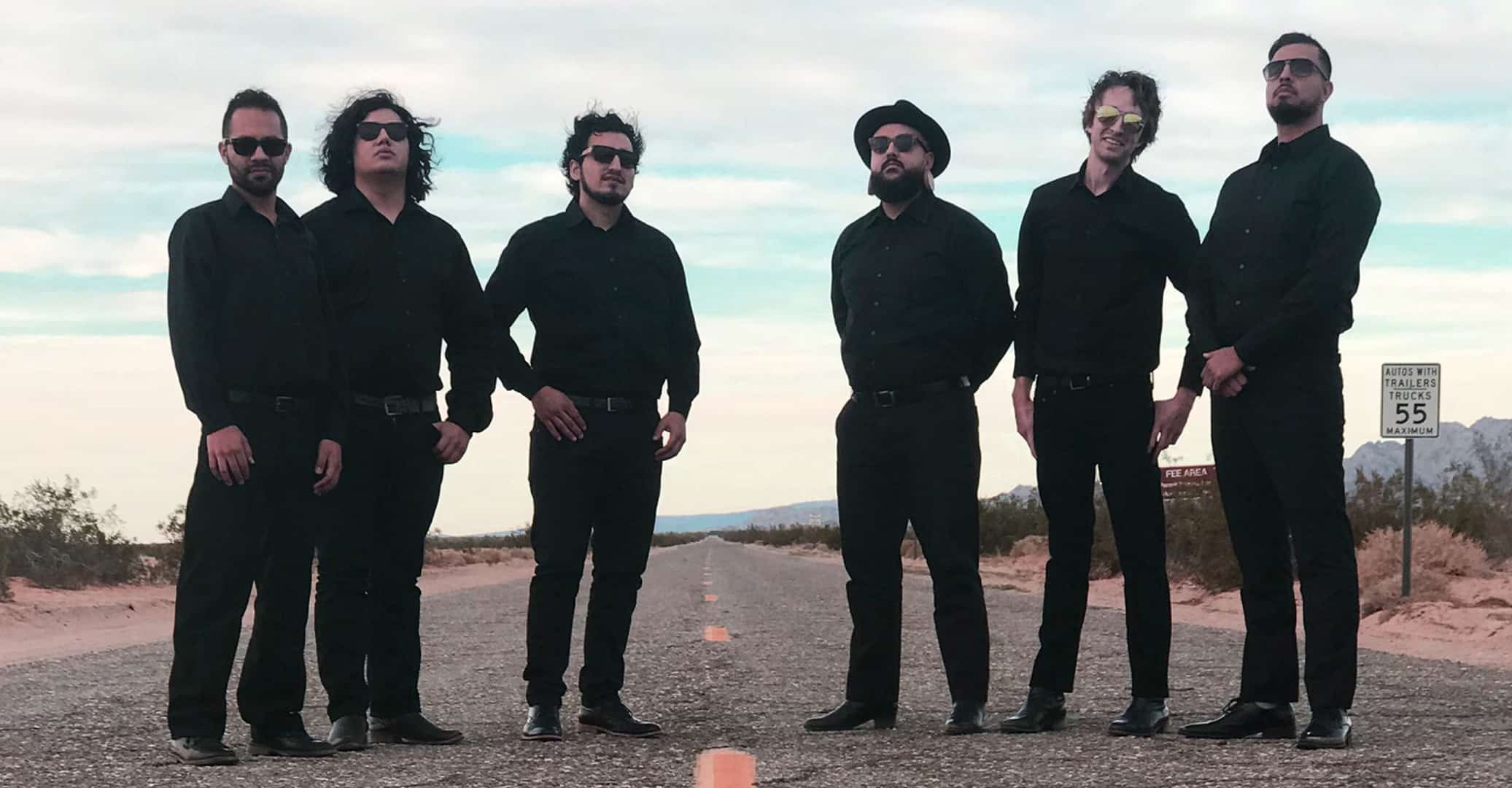 When Jason Zepeda, Carlos Zaragoza, and Alejandro Araujo formed the chicha band, La Chamba as just a hobby, like most hobbies for most folks. But soon the band realized just how much the Latino community valued the musical sanctuary they created and it became much more than a hobby. For the bandmates, it became a way of life; for the community, it became a warm light.

In September, and for the first time ever, this Los Angeles-based band will be making their way to New Haven, Connecticut and is looking forward to sharing this light with the east coast. Zepeda, the lead singer, and percussionist says, “We are super excited to be heading out that way. This tour is about spreading the chica angelina gospel from the west coast to the east coast. …We are excited to be able to transport the charm and the swagger and love of L.A. to the east coast and to really bridge that gap. Even though we are on two different coasts, we still have so much in common and we are really looking forward to connecting sincerely with folks out there and having a good time together and to share part of the way that we value and appreciate life, which is through this music. So we are really hoping that folks come out … we can’t wait to ignite the dance floor.”

While there are many different chicha bands in the U.S., La Chamba is uniquely influenced and born out of the concrete jungle of Los Angeles, which is why they call their genre of music chicha angelina. Chicha, itself, is a subgenre of music (loosely inspired by Colombia’s cumbia), one that is constantly being transformed as musicians add their own cultural flair to the mix. It is truly a musical mash-up of multiple cultures at its roots.

In a lot of ways, La Chamba’s inception draws parallels with how chicha developed as a whole. Zepeda recalls playing in a garage in East L.A. when they were first starting. Dogs would be barking, helicopters would be flying overhead. Many times cops were called. So they infiltrated Zepeda’s parents’ house in South Central L.A. where Zepeda says “the cops are never called.”

Zepeda met Araujo at college at UC Santa Cruz, where they were both first-generation college students. Zaragoza went to UCLA but he too was a first-generation college student. “It all happened organically,” recalls Zepeda. “We just always had the dream of starting a band. [Araujo and I] would jam out in our garage when we lived together [in Santa Cruz], and then when he graduated he came back to L.A. and we were like, ‘Man we have to start something to add to this beautiful musical landscape of Los Angeles.’”

They were all children of migrants, and they decided to come together and start playing music down in the dirt in the middle of it all, incorporating the sounds of the musical climate and culture that surrounded them. And, ultimately, they created their own unique version of chicha.

And this is very much how chicha originally formed in Lima, Peru. Zepeda informs: “That music was about migrating, and our parents are migrants, too. And [it was about] bringing all their melodies of their hometowns and translating it on guitar, and all this city sound coming together.”

Chicha was formed in the 60s and 70s deep in the Peruvian Amazon amidst the migrant population. Musicians came together to play and develop this psychedelic music by absorbing musical elements of the surrounding Amazonian regions of Peru. This emersion of a new subgenre of music quickly spread to Lima and became the choice of the indigenous migrant population. By the 80s, it had exploded all across Peru.

Will La Chamba continue to parallel the history of chicha by exploding all across the U.S.? It seems incredibly likely given their continued growth and success.

In the beginning, Zepeda says the goal was simple: To create a band that was a resource for the community. People called on them to play for marches and different community events. This is why they chose the name La Chamba—which loosely translates to “your hustle,” the connotation is very dignified. In essence, it is what you do to make a living. So they called themselves La Chamba to represent their mission and to pay homage to their hard-working community.

“Our goal was to create positive spaces for our community,” says Zepeda, “so we can get together peacefully and with love and shine this light of music and bring positivity to the world, to a world where darkness so often times overwhelms us. So just the act of coming together and dancing and sharing a beautiful musical space is an act of resistance.”

And then they started getting bigger calls.

“I think that moment we realized this was moving from a small resource for the community to a bigger experience was when we started getting calls to do more than just backyard parties, and small community events,” recalls Zepeda. “People started reaching out for us to play at festivals and larger venues. It went from playing in front of our families to playing in front of thousands of people. And it happened so organically and eventually we decided, you know, ‘Let’s keep this going!’ because it is truly valuable to people’s lives, not just our lives, but people’s lives … and so we kept on going.”

La Chamba is valued in the Latino community for so many reasons. Not only is the music rooted in chicha and has a cumbia feel to it with its Afro-Latin rhythms which puts people in touch with their heritage, but music, as a whole, can be said to be the heart and soul of the Latino community. Go to any quinceañera, wedding or baptism and there is always a cumbia and a flavor of joy. Music and dancing captures that flavor of joy and the spirit of the people.

Zepeda says this is all a part of the reason La Chamba is so honored to do what they do, explaining, “Although things are really tough for us, we still have joy, you know. So, I think that’s why music is so important because it gives us that opportunity to express our joy even when there is so much suffering.”

This couldn’t be a more personal statement for Zepeda at this time. For, on July 25, founding member Zaragoza lost his life during a shooting in Canoga Park, California. Zaragoza’s father also lost his life. Of the tragedy, Zepeda says the band is focused on taking care of each other right now. Zaragoza played with La Chamba for 8 years before stepping away to deal with family matters. Zepeda says that all La Chamba band members are brothers, so they truly lost a brother. (See below for GoFundMe information.)

But in the midst of this tragedy, Zepeda is able to speak of positivity and of music, as music has always been where he saw light and positive forces at play. “This music has always been important to us because it kept us out of trouble,” says Zepeda. “I was always wanting to be a musician because music was that positive direction for young people in our neighborhoods. It was either drugs or violence or gang activities, but the music was that positive outlet. When I started learning the drums later on in college I met a lot of friends that would play the cumbia, Afro-Cuban music, which is really built around community, and everyone was playing their part and their role, and all that together creates this polyrhythmic experience for folks and it really activates the connection between people. That’s what got me into music.”

He continues, “It’s been such a beautiful experience to come together with folks from all sorts of walks of life, because chica, like our community, has a little bit of everything. It has classical rock, it has Afro-Latin rhythms, it has old sweaty organs, it has surf melodies and a little bit of funk. We throw in all these elements that are representative of our community and on the dance floor, the music has united so many folks, from young to old … the different colors, the different classes. The dance floor is definitely one of those places where all barriers are broken down and that’s why we do it because on the dance floor we are all the same. It’s where we can all come to enjoy this beautiful life together.”

La Champa will be at The State House in New Haven, Conn. on Sept. 10. For more information or to purchase tickets click here.