Jose B. Gonzalez is one of those people who seem to live and enjoy every day at its fullest. When he is not teaching literature at the Coast Guard Academy in New London, he is helping friends with projects, or coaching his daughters’ soccer teams. Even though both of us live so close to each other, I first met Jose in 2009, in San Antonio, Texas, when we both had the honor to receive an award from the American Association of Hispanics in Higher Education (AAHHE), which selected him as Outstanding Latino Faculty of the Year. Since then, he has received many other awards including a Fulbright Scholarship and in 2015, was awarded the Identidad Latina newspaper’s “Latino de Oro” for his contribution to the Latino community in CT and his work to increase the visibility of Latino writers in the USA.
Since we met, we have developed a strong friendship based on our mutual respect and our love for literature. I feel like an older sister who is proud of her little brother’s accomplishment. One of them was the recent publication of his book “Toys Made of Rock” published by Bilingual Press/Editorial Bilingue, of the Arizona Ste University. The book which has already received praised by many writers, has a quote from Rhina Espaillat, a well-known Dominican author who wrote in the back cover “There are poems in this collection that break my heart, and some-often the same ones- that make me cheer for the clear-eyed resilience of the spirit behind them.” While Cuban-American writer Mirta Ojito, has said that “[This] lyrical book of poems is like a map of Latin America’s recent history. Born in San Salvador, El Salvador, he immigrated to New London, Connecticut at the age of eight.  He knew no English and now holds a Ph.D. in English. His struggles and that of  his family and community are reflected in his work.
Many  of us who are Latino writers and artists in Connecticut know of Jose’s commitment to literature, and his support of our work. Now, that he has published his first book of poems, I think it is time for others in Connecticut to get to know this talented and  respected member of our community who gives voice to the life of exiles and immigrants and whose work is not afraid to confront racism head on.
A CONVERSATION WITH JOSE B. GONZALEZ
BR: Tell me something about your own family. I know you are very involved with your children, their sports, etc
JBG: My family is my pride and joy. I have three daughters, 16, 15, 11, and a son who is 7.  They are very active and participate in soccer, basketball, lacrosse, field hockey, baseball, and fencing.  My wife is an ESOL teacher in the Waterford school system.

BR: What about your parents?
JBG: Both my parents worked in blue-collar jobs all their lives. Of course, they didn’t think of their work that way—they simply thought of work as something they had to do for our family to survive and thrive.  At times, they worked more than one job at a time, and as a result, my sister and my brother and I saw hard work as something that came natural.

BR: Let’s talk about your writing: Your new book Toys Made of Rocks Is divided in four parts. From Salvador, where you were born;  to your love for books  which caused a policeman to approach you at a parking lot, simply because you were sitting reading a book.
How long did it take you to write Toys Made of Rocks?
JBG: It took me about eight years to write it, and that’s because I kept revising the poems and the manuscript.  I was fortunate to get advice and feedback from such talented poets as Rhina Espaillat and Tino Villanueva.

BR: So, are you one of those writers constantly editing your poems?
JBG :Yes, absolutely.  Give me time with a poem, and I’ll continue think about how it can be better.  But that’s what makes poetry exciting and vibrant, especially if, like me, you like reading and performing it.

BR: The last section of your book  “Classrooms: Lessons in Brown” includes poems in which you deal with racism;  one in particular “The Autobrownography of a New England Latino” is a long prose-poem. It reminds us that for Latinos it doesn’t matter how well educated we are, we can still be the recipient of racist actions against us. But instead of this racism defeating you, your poem ends with a triumphal note: “I’m educated, And I’m brown.”
How have those negative experiences shaped your life?
JBG : The experiences in which I struggled ultimately made me stronger.  I really believe that.  Of course, at the time they took place it didn’t quite feel that way, but I can honestly say that they helped motivate me.  My poems were a way for me to express that.

BR: When did you decide to become a professor?
JBG: I always wanted to teach, and I started off teaching high school.  I wound up getting a Spanish-teaching job, and that’s only because I spoke it.  But my passion was always for English, and I wound up going on to graduate school, first teaching at Three Rivers Community College in Norwich, and then at the U.S. Coast Guard Academy. Originally, I thought I’d spend my life in business. I have a bachelor’s in business administration, but after getting a taste of the corporate world, I knew that life wasn’t for me. While working on my Master’s at Brown University, a professor asked if I could take over her class. I was hooked.  I absolutely loved it and was hooked from that moment forward.

BR: During your years at the Coast Guard Academy, was there a moment you were most proud of a student?
JBG: I’m proud of all of them for sacrificing so much for our country, but I have to say, I am especially proud of the ones who have opened up their minds to the world of poetry.  I started a poetry slam at the Academy about 10 years ago, and to see them take risks and recite poetry in front of their peers, it shows how much they are willing to go.

BR: Other  projects you are working on?
JBG:  I just completed another poetry manuscript that is based on Latin American films and Hollywood. It forced me stretch my imaginary boundaries, and I had a great time with it.

BR: Do you have readings coming up in CT and elsewhere?
JBG: I will be reading at the Studio at Billings Forge in Hartford as part of the WordForge reading series, at 7:00 PM on  March 7th , with local poet Pat Hale. The studio is located on Broad St, next to the Firebox restaurant. I will also read in Los Angeles, CA, at the Plaza de Cultura y Artes, Saturday, April 2nd, 7:00 PM and later in the summer at the West End Poetry Series, 250 Kenyon St, Hartford, CT on August 20, at 6:00pm. All these readings are free and open to the public.

BR: Gracias Jose for spending this time with us and I wish you all the success your wonderful new book deserves.
Please visit his web  www.josebgonzalez.com  for more information.  Copies of the book can be purchased at www.bilingualpress.clas.asu.edu/book/toys-made-rock  $12.00  ISBN 978-1-939743-15-2 or at www.amazon.com

In this article:Bessy Reyna, Diane Alverio, Hispanics and poetry, Jose B. Gonzalez, Latino authors, Toys Made of Rock 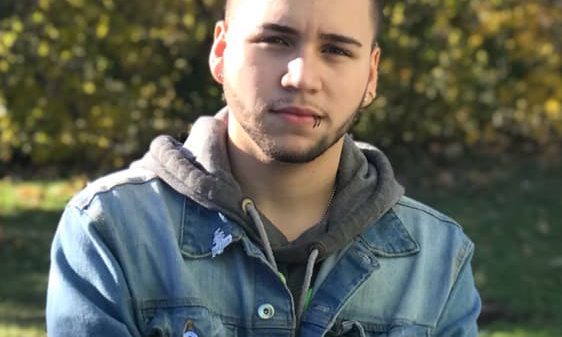 Por Bessy Reyna, CTLatinoNews.com/Identidad Latina Danny Diaz-Villafane is a senior at the Greater Hartford Academy of the Arts, enrolled in the Creative Writing/Media Arts department. He...