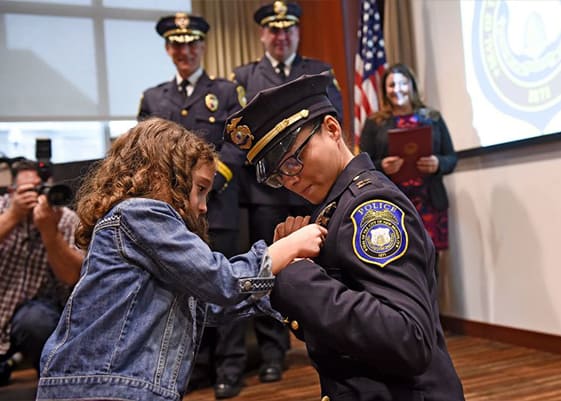 The recent appointment of Police Captain Jeanette Portalatin to acting deputy chief of the New Britain Police Department represents a major personal milestone, and what local community and police leaders hope will inspire other Latinas to pursue careers in law enforcement.
While Hispanic men and women are becoming more visible in local police work, Portalatin’s elevation to her department’s number two slot is a singular achievement in Connecticut, so far. She would become the first Latina in the state to hold a position of this high rank, said New Britain Mayor Erin Stewart, who appointed Portalatin, whose heritage is Puerto Rican, to this acting status and will play a major role in the process that could make this promotion permanent.
Achieving firsts is nothing new for Portalatin who has been with the city agency twenty-two years. In 2013, the New Britain native was promoted to lieutenant, becoming the highest ranked woman in the department’s history. Last year, she moved up to captain, another first for a female member of the NBPD. “Hopefully some day soon we will see a female chief,” Stewart suggested.
While Stewart and other community leaders portray Portalatin as a role model, she tends to down play this accolade, but embraces the opportunity to help attract Latinos to police work. “I do not know if my career is an inspiration for anyone but I truly do hope it motivates men and women of Hispanic descent to join the ranks,” she said.
The NBPD’s personnel profile has changed significantly since Portalatin took her oath to serve and protect. “There are five Latinas on the force now and there was one other female and I when I came on in 1997,” she said.
Similarly, Hispanics in general have become more prevalent, comprising about 12 percent of the 154-member New Britain department, as compared to about 7 percent five years ago. The department’s 18 Hispanic members include Portalatin, a lieutenant, a sergeant and two detectives, one of whom is female, according to the city’s human resource office.
New Britain’s experience mirrors national trends. According to the U.S. Department of Justice, the percentage of Hispanic/Latinos now serving as local police officers across the nation have more than doubled from 5 percent in 1987 to 12 percent in 2014. This ongoing change has been, driven by several factors including the significant growth of the Hispanic population and influence, as well as increased community and legal pressure to bring greater racial and gender diversity so that police better reflect local demographics.
In New York City, Hispanics comprise about 28 percent of the population and the nation’s largest police department, the NYPD, had 36,421 members at the end of 2018, with Hispanic males of all ranks totaled 7,705 or 21.2 percent of the department and females 2,531 or 6.9 percent. Ten years ago, there were 35,538 uniformed members with 6,853 Hispanic males comprising 19.3 of the uniformed force and 2,152 Latinas amounting to 6.1 percent.
In Connecticut, Hispanics continue to be under-represented in local police departments. Bridgeport has one of the best records in the area. Hispanics comprised more than 38 percent of the city’s population in a 2014 Census study and 27 percent of the police, and last year Cuba-born Amando J. Perez became chief. Hartford and Willimantic also have Hispanic police chiefs.
However, in regard to Latinas and women in general holding top ranks in police departments, Portalatin remains the exception, although there are signs of progress, notably in states with large Hispanic populations such as California and in diverse cities such as Houston (43 percent Hispanic) and Newark (34 percent) where Latinas have been appointed police chief, albeit for short temporary stints.
Portalatin has the potential to be a great deputy police chief, Stewart said. The New Britain native has a great leadership ability and has demonstrated that she is a thorough investigator, the mayor said, adding all she has heard is positive accolades.
Former Police Chief James Wardwell, who retired at the end of January, said her career path in the department is similar to his and he has been impressed with her law enforcement competence since observing the young Latina officer make an arrest in the North Street area two decades ago.

Wardwell said that Portalatin possesses an excellent skill set for police work and has experience in all aspects of the department’s mission, including serving as his public information officer and head of the criminal investigation division. He observed that Portalatin “is more than a cop, she is an outstanding person” and “gets great respect from her brother and sister officers.”
In addition, the retired chief said that Portalatin being a Latina is a positive in a city where, according to a 2014 Census study, 37 percent of New Britain’s population shared some Hispanic background, with many having come from Puerto Rico like the acting deputy chief’s parents Pedro and Elva Portalatin, who remain city residents.
Looking forward, Stewart said the success of Portalatin, who was born and raised in New Britain, will inspire other Latinas to pursue police careers. “We have several now, but not as many as we would like.” the mayor said. “The department is always accepting applications,” she noted.
In general, getting more Latinas to apply for police jobs involves overcoming hurdles such as their concern about being in a small minority in the department and a distrust of police in some minority communities where most of the officers are white.
Wardwell advocates a pro-active effort. “Getting more Hispanic females to apply involves an ongoing partnership between the agency and the community,” the retired chief said. “The department needs to stay committed to embracing the best in its officers and increasing diversity with an emphasis on giving equal opportunity to all.”
The retired chief also said, “The community needs to continue to support the women who apply to our department and choose this very rewarding career path. Jeanette Portlatin is a terrific role model for these women and all others wishing to pursue a career as a police officer.”
Wardwell also explained that the NBPD has a strong relationship with New Britain’s Latino Coalition and other community groups who help spread the word about police officer hiring initiatives.  “These bridges must be not only maintained, but made stronger though continuing open communication,” he said.
With Wardell’s retirement, Stewart recently appointed Deputy Chief Chris Chute as acting police chief. Both top level positions are being posted internally for applications to meet civil service requirement and the finalists will be screened by the police commission. Stewart said a new chief will be chosen before the deputy post is assigned.
Stewart recalled that when she told Wardwell about the selection of Chute and Portalatin, “he was gleaming from ear to ear.” She also said that Chute and Portalatin rode the same bus to school  and that as young officers, they both “walked the North and Oak streets area together.”
Portalatin said that after high school she joined the Army Reserves and was not looking at a career in police work. “I accidentally stumbled upon it,” she said, “when a friend invited me to take the entry level test in New Britain with him.  It was my first time taking a police exam. I was hired and he unfortunately was not, however he was later hired by the State Police.”
Her Army experience proved helpful, she said. “Prior to becoming a police officer, I finished boot camp and advanced training in the military. The police academy was very similar training and an easy transition for me.” She added, “I enjoyed policing and found that every day I came to work was like a new day.  No two experiences were the same.”
As for a major focus in her career, Portalatin said: “I would have to say it was supervising the criminal investigation division (CID). I have spent roughly 13  out of my 22 years in the CID and the past six in a supervisory capacity.  The unit solved numerous cases including a cold case homicide, a case involving a serial killer and numerous felony crimes. The work is interesting and the techniques in solving crimes is always evolving.”
Also evolving has been Portalatin’s view of what is the best aspect of police work. Today, this is watching her subordinates grow professionally, she said. “I had my fun and solved my cases, but as you grow older you want to see who that next shining star will be. Seeing an employee enjoy their work and looking for growth makes my day,” she said.
As for the toughest part of the job and one she said she will never be okay with is crimes against children. “I applaud the men and women who work in the youth bureau because they do the toughest job in the building.” she said. As a single mother raising three children, Portalatin said that she found among her job’s benefits: “is that it provided my family with stability and gave me purpose. Yes, I may see the worse in society, but when you can help those in need it is a self-gratifying moment.”
Portalatin is widely known in the New Britain community for her professionalism  and her integrity, which are a source of pride in the Latino community, said Carmelo Rodriguez, a leader of the local Latino Coalition and the effort that resulted in the creation of the Borinqueneers Monument and Park in New Britain. “She was our first Latina captain in the history of the New Britain Police Department,” Rodriguez said, “and now she’s making history again as the first Latina Acting Deputy Chief in the state of Connecticut. Wepa!”
Bill Sarno/CTLatinoNews.com
In this article: