The state of Latino journalism is grim. We all know Latinos are the largest minority group in the U.S., at 17.4 percent of the population, but you wouldn’t know it by turning on the news or skimming bylines at any of the major media conglomerates.

After decades of trying to ensure representation for and in-depth coverage of the fastest growing segment of the U.S. population, how can this be?

“I think the reason we’re still talking about this is because very little has changed since the 1980’s,” said Russell Contreras, a reporter for the Associated Press and president of UNITY: Journalists for Diversity. “And what gains were made were impacted by the contraction of the news business this last decade. Quite frankly, the people who were in charge of those diversity programs were kicked out of the business themselves and a lot of us have become orphans of a sort because we’ve lost our mentors.”

These losses, their lack of replacements, and a system where, often, the newest, most diverse, young journalists are the first to lose their jobs in layoffs, contribute to a dearth of access to insight about a diverse, multi-generational Latino community that is increasingly geographically dispersed and likelier-than-not to consume their news in English.

“The problem is that when there are none of us in the newsroom, it affects all coverage, not just coverage of issues specific to Latinos,” said Contreras. “When Ted Kennedy died, the newsroom huddled to discuss what stories to tell – ‘What are we losing?’ ‘What did he do?’ ‘What is his legacy?’ I brought up his role in the passage of the 1965 Immigration and Nationality Act and the editor said, ‘That’s a great idea, I never thought of that.’ But it was something I could add because of my background. Had I not been there, who knows, that story may never been done.”

“I’m not saying that all of us can walk in with a tremendous story,” Contreras said, “but it is important to have us at strategically placed locations because without us, readers might not get the actual narrative of a changing American experience.”

Still, the numbers – as bad as they are – don’t tell the whole story.

“As I get older and older I take a longer view on this issue because I remember a time when things were even worse than they are today. You’d look on TV or news, and especially the newspaper, and you wouldn’t see any Latinos at all,” said Angelo Falcon, a political scientist and a co-founder of the National Institute for Latino Policy, which he has directed since its start in 1982. “Today I see a smattering but there is some progress even if it is happening at a snail’s pace. But this isn’t limited to journalism – our population is growing so quickly yet development of this community is not keeping up.”

Falcon noted that Latinos are also underrepresented in government and the private sector – incredibly, advocacy organizations are still fighting to have Latinos included and broken out in basic social sciences research. Yet, he attributes some of this inability to coalesce around key issues to a fundamental challenge facing such a diverse community.

“There are constant tensions and struggles within our own community because we’re talking about people from 21 different countries, at least, plus a real generational diversity,” said Falcon. “It’s a very ambiguous and tricky relationship with society because some of us can say we were here before there even was a U.S. and then there are groups who have come to this country very recently.”

Falcon compares this to the relative success African-Americans have had in being able to come together to demand changes.”When it was decided that the new term would be ‘African-American,’ Jesse Jackson and other activists held a press conference and said, ‘this is the new term’ and that was it,” he said. “You look at our community and to this day there’s division over whether we have an ethnic or racial identity, whether it is ‘Latino’ or ‘Hispanic’ – we’re still at that very basic level.”

In this article:Diane Alverio, Hispanics and media, Latino journalists, NAHJ 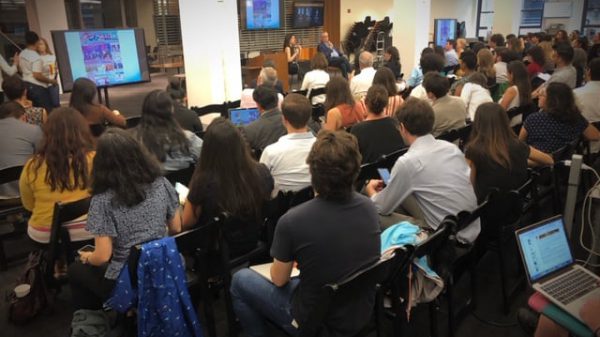