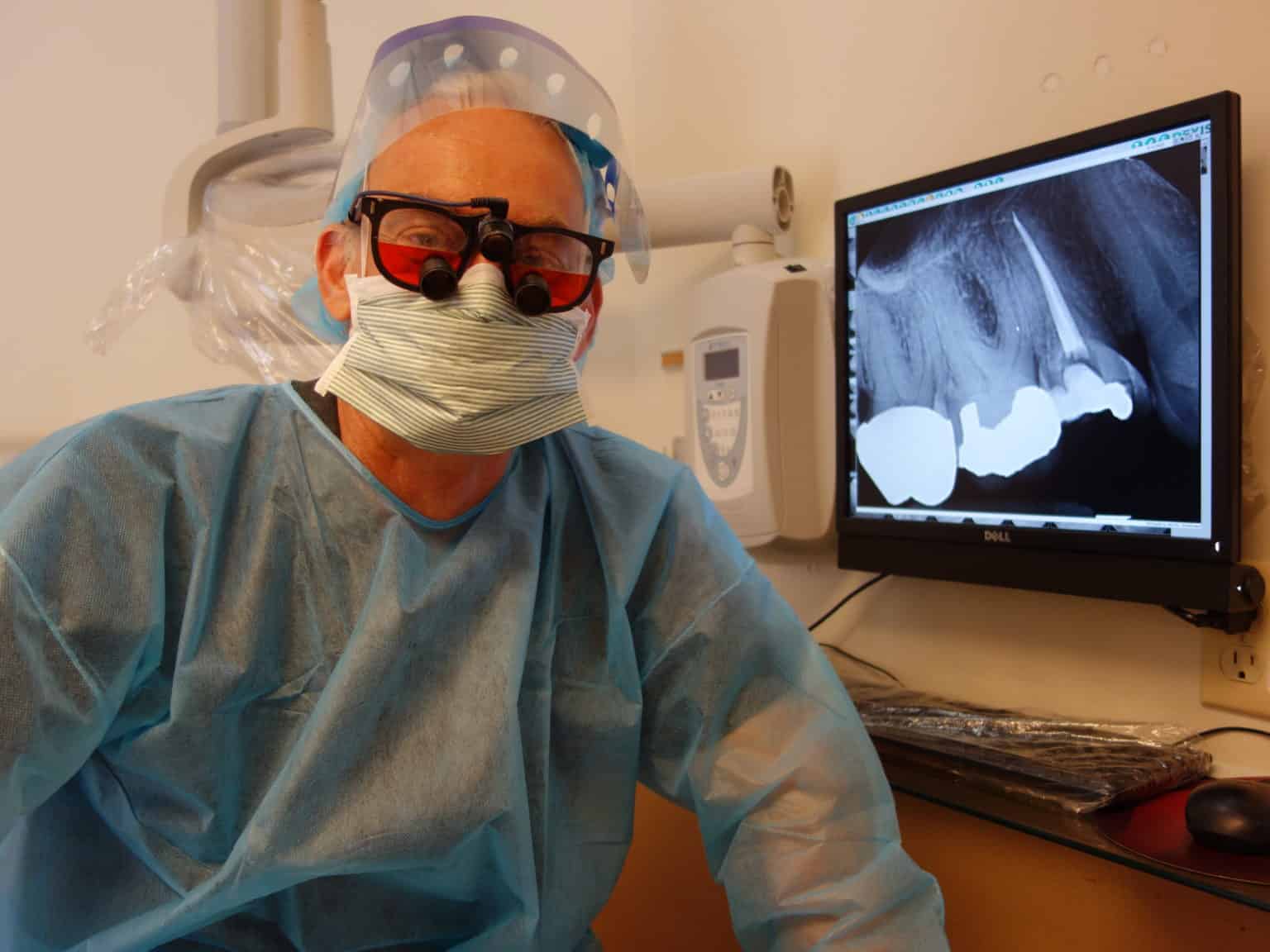 After the COVID-19 crisis came to Connecticut, the New Haven office of Comprehensive Dental Health shut down completely for two weeks. Later, Dr. Joseph Tagliarini began opening the office a few days a week with a skeleton crew to handle emergencies. Now the office is operating at nearly full staffing—with six full-time and six part-time employees.

Nobody on the staff has gotten sick, and Tagliarini wants to keep it that way. He hopes the health care industry will produce a new generation of tests for the virus that will be simple, inexpensive, and accurate, and will deliver results on the spot. “For any dentist, having these kinds of tests would be very attractive. They’d probably order it tomorrow,” Tagliarini says.

It so happens that a biotech startup located in Guilford, just 15 miles away, is in the latter stages of producing just such a test aimed at providing large scale, frequent testing of people whether they have symptoms or not. Homodeus Inc., owned by gene sequencing pioneer Jonathan Rothberg, plans to begin clinical trials of its COVID Detect technology in July and hopes to have products on the market in the third quarter.

Homodeus is preparing two tests based on the same technology—one for use in the workplace and one for home use. The goal is for the tests to be nearly as easy to use as a home pregnancy test and cheap enough to permit frequent use. “This is the only way to catch the virus early, so you don’t go out and infect other people,” says Rothberg. “It reduces your anxiety and fear, and it allows you to go to work confidently.”

Government and health care leaders say widespread and frequent testing will be essential for Connecticut and other states to keep their economies chugging along even while the virus continues its spread. As Connecticut has gradually reopened, it has kept a lid on transmissions and prevented hospitals from being overwhelmed. Recent reports from the state show that fewer than 150 people with COVID-19 are being treated in the state’s hospitals, down from a peak of nearly 2,000 in mid-April. Still, while testing has ramped up to on average 6,500 tests per day, that is far less than some health care authorities had called for.

Numbers compiled by the Connecticut Department of Public Health show that while Hispanics, Latinos make up nearly 17% of the population, they are three times more likely to get COVID-19 and twice as likely to die from the virus.

The danger of a resurgence is always present. There are signs that people across the state are beginning to abandon safe practices, including social distancing, mask-wearing and handwashing. That’s why health experts say more and better testing is needed, especially for people working in at-risk settings, including hospitals, schools, medical and dental offices, elder care facilities, gyms, restaurants, salons and barbershops.

“Regular, universal testing is so critical for safe return to work, so employers of high-risk workers should be offering rapid on-site testing,” says Shan Soe-Lin, a lecturer at the Yale Jackson Institute for Global Affairs. She says frequent testing will be needed until an effective vaccine is available. Even with some clinical trials fast-tracked, that is not likely to happen until sometime in 2021.

The state’s health care providers are stepping up. Hartford Healthcare has built a massive testing infrastructure for employees and patients. It has nine testing sites serving seven hospitals, dozens of clinics, and eight elder care facilities. The health system also provides testing for first responders and some state employees—and it is offering its testing services to other employers. “Every organization needs to have a return-to-workplace strategy,” says Dr. James Cardon, executive vice president and chief clinical integration officer for Hartford HealthCare. “We have to learn to live with COVID, and workplace testing is an important part of that.”

Public health experts say home testing could become a piece of the overall testing picture as well, especially for people with high-risk occupations. But they warn that simplicity, accuracy, and quick availability of results will be critical for home testing to be useful. The capability of non-experts to properly administer the test is also an issue.

“A home COVID-19 test would need to have very high sensitivity and specificity, meaning that it would need to both correctly identify those who have the disease and those who do not. The implications of false-negative and false-positive tests could be huge,” says Angela Ulrich, a research associate with the Center for Infectious Disease Research and Policy at the University of Minnesota.

“Regular, universal testing is so critical for safe return to work, so employers of high-risk workers should be offering rapid on-site testing.”

False negatives could lead to the spread of the virus to others if the people who are tested forego physical distance and other safety measures. A false-positive test could lead to people not being allowed to work even if they were truly not infected.

Still, all molecular tests are not of the same quality. One made by Abbott Laboratories and administered by CVS has been criticized for producing too many false negatives.

Homodeus uses the molecular approach. On March 7, Rothberg directed the company to try to develop a molecular test at a fraction of the cost of the gold-standard molecular tests, which require a laboratory, technicians, and $25,000 machines. Rothberg envisioned a self-administered test that would immediately deliver results and use a small device that people could place on the bathroom sink. The first scientific validation tests were conducted at Yale School of Medicine.

Fast forward to today, and Homodeus is ready to test the technology on people. The first clinical trials for point-of-care settings will occur at sites in New York, Pennsylvania, Virginia and Illinois. In the tests, a user self-collects a sample from the shallow part of the nose and hands the swab to a trained technician to run the test. The results are available via a smartphone app in 45 minutes. The folks at Homodeus expect to sell a version that will produce results in 15 minutes. “This is a stepping-stone to our dream, which is to get to the home,” says Erin Girard, head of clinical science at Homodeus.

No true at-home molecular test for COVID-19 is available today. A few home-sample collection tests exist, but these cost over $100, and it takes two to three days to get results since the sample is shipped to a central lab for processing. Homodeus’ test does not require sending a sample to a lab. If approved for at-home use, the company plans to sell the device and test kit to consumers for less than $50.

In parallel to the clinical trials, Homodeus has signed up employers to address usability issues that will be critical for any workplace- or home-testing system. They’re collaborating with organizations in Connecticut and elsewhere to refine testing procedures and training.

One of the organizations is Country Meadows, which operates 11 assisted-living communities in Pennsylvania and Maryland. The company has contained the spread of the virus but wants to be able to test its employees and residents more frequently and confidently, so it can allow family members to visit once again. “The key solution is rapid, readily available, and reasonably priced testing,” says Meredith Mills, the company’s chief operating officer. “This is how our business will survive and our residents will thrive.”

While Homodeus and other companies continue to develop better home and workplace tests, a sister company to Homodeus, AI Therapeutics Inc., has been repurposing an existing therapy, LAM-002, to treat COVID-19. “We want to make these tests and these treatments ubiquitous in the United States and around the world,” says Rothberg. “We need to move quickly so we can save lives.”

To learn more about the future of COVID-19 testing:

The Center for Infectious Disease Research at the University of Minnesota has published a series of reports about COVID-19 for use by governments, health care organizations and businesses. One of them sets out guidelines for testing.

Cover photo by Steve Hamm: Dr. Joseph Tagliarini is operating his dental office at nearly full staff and hopes that a new generation COVID test will be developed that will give results on the spot at work or at home.