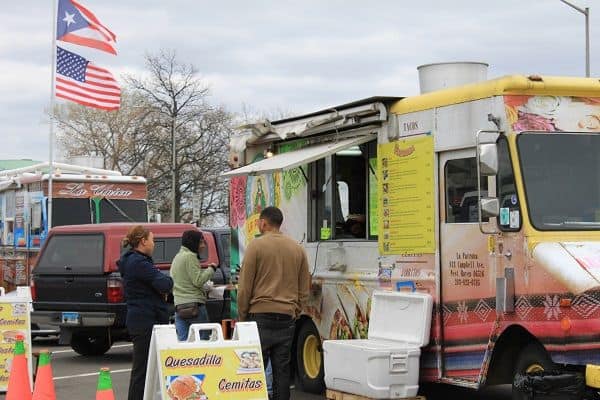 NEW HAVEN — A sea of Latin American flags just off Interstate 95 mark the spot of the Food Truck Paradise.

The food trucks have been a mainstay at 351 Long Wharf Drive since the site opened in 2016 thanks to a $1 million contribution from the state.

Although Food Truck Paradise is open to any type of food, the majority of foods are from Latin America with several from Mexico, Puerto Rico and Cuba.

When it opened, Matthew Norman, head of economic development in New Haven, said the area would benefit small businesses, especially those owned by immigrants.

The designation of a site such as Food Truck Paradise helps to increase the number of customers for these small businesses since people know where to go to find traditional foods from their countries at an affordable price.

It is also an opportunity to showcase the wide variety of Latino foods to a diverse clientele — including students from Yale University.

Among the many trucks, names such as “La Patrona” and “Taco Joy” which offer typical Mexican dishes such as churros and choclos with cheese and mayonnaise.

Puerto Ricans can delight in such classics as pinchos, alcapurrias with stuffed yucca and green platano.

Food trucks have grown in popularity at an impressive rate and have had an especially big impact with Latino food.

According to an article in the New York Times, food trucks were instrumental in the sky-rocketing popularity of Mexican food in Europe. Many Europeans are now familiar with nachos and tacos thanks to these food trucks. This trend will make Latino food in general, to become more widespread across the globe.

CTLatinoNews.com and Identidad Latina are partners in better serving the Hispanic/Latino community in Connecticut.

After decades as one of New Haven’s leading elected officials, Jorge Perez has been tapped to enter state government as Connecticut’s new...