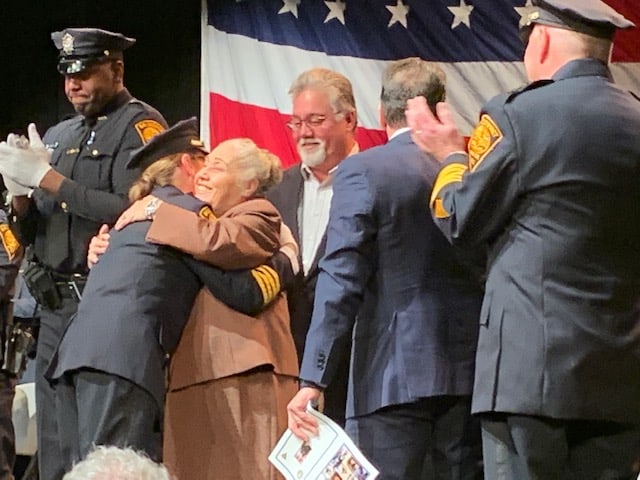 A few days before his re-inauguration in December, Bridgeport Mayor Joe Ganim announced several “new faces” for key posts in his administration.

Two of these appointees are of Puerto Rican ancestry, and one of these was establishing a first for the city.

In being chosen to serve as assistant chief,  police Captain Rebeca Garcia became the highest-ranking Latina in department history.

The word “new” was a misnomer in regard to working for the city. The two Puerto Ricans elevated  — Garcia and the interim director of labor relations Eric Amado – have combined for nearly four decades of public service in Bridgeport.

However, Garcia and Amador were being elevated to new roles and represented the latest example of the upward movement of Hispanics and other disenfranchised groups toward a government that looks like Bridgeport in terms of demographics.

“I think any appointments of Latinos to top posts are always a positive… I hope the trend continues in Bridgeport .”

“I think any appointments of Latinos to top posts are always a positive,” said state Rep. Chris Rosario, who at one time held a city position. “I hope the trend continues in Bridgeport,” he added.

The naming of more Latinos also correlates with their rising political clout and in some ways represents at least a partial payment on a political pro quo.

Latinos comprise about forty percent of the city’s 144,900 residents; another 35 percent are black or African-American, according to the U.S. Census Bureau. As for Puerto Ricans, they amounted to 21.2 percent of the total population in 2015 and continue to come to Bridgeport.

Garcia, a police officer since October 1991 will be second in command to Chief AJ Perez, a Cuban-American, within the department, has experience in various command and supervisor roles including leadership in the patrol, internal affairs, and domestic violence units.

Garcia, who says she is proud and honored by her promotion, recently has been the commander of the Training Academy, teaching recruits and sworn officers de-escalation and relationship building through community awareness and interaction projects.

The new assistant chief added, “I look forward to working with Mayor Ganim, Chief Perez, the members of the Bridgeport Police Department and last but surely not least our community. Juntos podemos (Together We Can)!”

However, former Mayor Tom Bucci, a labor and employment law specialist, has charged that Garcia’s unilateral appointment to assistant chief violates the competitive process, although city leaders refute this allegation, according to the Only in Bridgeport website. Bucci represents captains Brian Fitzgerald, Steven Lougal and Roderick Porter, and Deputy Police Chief Anthony Armeno. A court date is scheduled for March 2.

“An honor and humbling.”

Amado has been in city administration since 2011, serving as a human resources administrator and supervisor in the civil service office and labor relations.

Amado said his appointment was “an honor and humbling” and observed, “the efficient and good faith execution of negotiations” with city unions is essential to the employees, and management as well as to resident.

Amado credited his success to his background. “I give thanks to my Hispanic upbringing for all of my professional accomplishments. The Puerto Rican household, culture, and ethics has developed me into the person I am today,” he said.

“I look forward to serving the City I call home, our honorable mayor, employees, and communities,” Amado said.

Garcia and Amado were not the only Latinos making headlines in Bridgeport at the end of 2019.

Jessica Muniz-Martinez became the chair of the city’s Board of Education. “She now joins Bridgeport Council President Aidee Nieves as the only Latina council president and board chairs in the state,” said Rosario, deputy speaker of the House and the senior member of the city’s delegation to Hartford.

Bridgeport is saying goodbye to a longtime mainstay at City Hall. Democratic Registrar of Voters Santa “Sandi” Ayala who describes herself as a “diminutive” but “tough Puerto Rican, has retired from her elected position.

Ayala oversaw the largest active municipal party voter enrollment in Connecticut the past 16 years and dealt with several political controversies during her tenure.