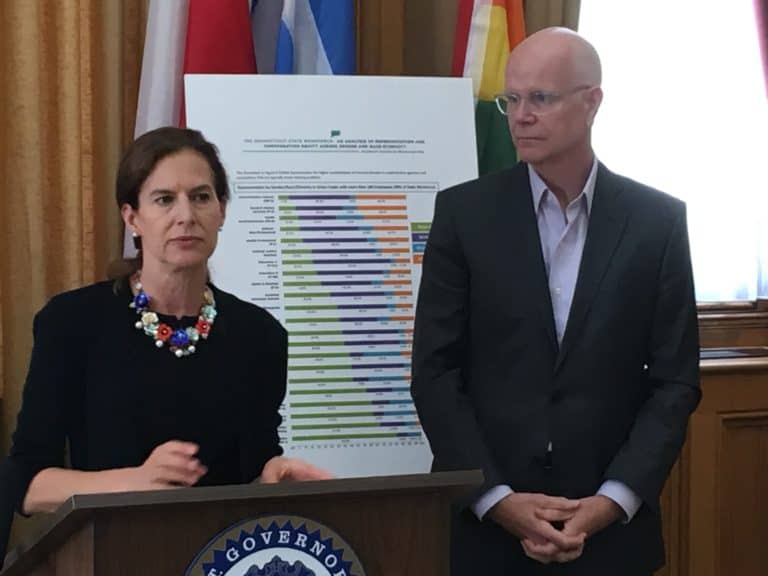 Connecticut’s executive branch workforce is more equitable along gender lines than those of the federal government and many other states, according to a new study released last month by Gov. Ned Lamont’s Council on Women and Girls.

But the report also found that white employees, both male and female, earn significantly more, on average, than workers from racial and ethnic minority groups.

The report released on July 24 found that women in the executive branch — excluding employees of public colleges and universities, who weren’t included in the study — earn slightly more than men, on average.

Connecticut’s executive branch workforce nearly matches the general population along gender lines,  And when it comes to the state’s highest-ranking officials and administrators, women represent 51.7 percent.

“While there is definitely more work that we need to do, I have to say that the governor and I and the comptroller were very encouraged by the results,” said Lt. Gov. Susan Bysiewicz, who joined Comptroller Kevin P. Lembo to announce the results at the Capitol.

About 49 percent of the executive branch’s non-higher education workforce is female and 51 percent is male, the report found. By comparison, only 44 percent of federal employees are women.

When it comes to the highest-ranking officials and administrators, women in other states, on average, hold 44 percent of the jobs. At the federal level, female representation is about 40 percent, the report found.

According to the last census, about 66.5 percent of Connecticut residents identify themselves as white, 16.5 percent as Hispanic or Latino, 12 percent as African-American, and 4.9 percent as Asian.

“The people of the state of Connecticut value diversity and demand equity across gender and race/ethnicity – and so this report will serve as an important roadmap for every agency to ensure that they build the most optimal and equitable workforce possible,” said Lembo, whose office compiled the analysis.

Women in Connecticut are most heavily represented in agencies that focus on providing care to people, such as the departments of Social Services, Public Health, Developmental Services, Rehabilitative Service, and Mental Health and Addiction Services.

Men were most heavily concentrated in public safety and regulatory departments, including Military, Emergency Services and Public Protection, Correction, Transportation, and Energy and Environmental Protection.

There also are concerns about the job types and racial and ethnic breakdowns.

The highest concentration of minority females is in care-providing agencies, such as the Department of Social Services and Department of Children and Families.

And while the report doesn’t recommend a series of corrective actions, Bysiewicz and Lembo said it is designed to spur further analysis and change.

Bysiewicz said the administration will continue requiring departmental commissioners and other agency heads to identify opportunities to improve diversity and eliminate pay inequity.

They also urged the state’s colleges and universities, as well as the Legislative and Judicial Branches, to conduct similar studies.

“We want to lead by example,” Bysiewicz said, adding the governor’s council would reach out to corporations later this year to see how Connecticut compares with the private sector.