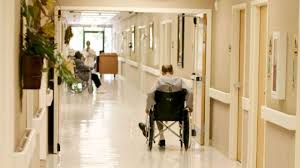 Eight Connecticut nursing homes have been fined by the state Department of Public Health in connection with one resident’s death and other incidents of rapid weight gain, cuts and broken bones among residents.
On Nov. 7, Beacon Brook Health Center in Naugatuck was fined $2,180 in connection with a resident who died May 23 of cardiopulmonary arrest and a bowel obstruction, DPH records show. DPH found that the home’s medical records failed to reflect that an abdominal assessment was done on May 23 after the resident complained of nausea and a stomachache on May 22.
Also, medical records did not indicate that a physician had seen the resident after May 21, and the home did not have a policy about abdominal assessments, DPH records show. On May 23, the resident was found without a pulse and CPR was started. The resident died after paramedics arrived and took over the CPR, records show.
In an unrelated case, a Beacon Brook resident with congestive heart failure mistakenly was not given medication for fluid retention, and no weight gain parameters were noted in the resident’s record that would have triggered a doctor’s notification, records show. The resident gained nine pounds between July 10 and July 21 and was hospitalized for shortness of breath and fluid overload. DPH found that the drug was noted in a physician’s order but not in the medication record, so the nursing home stopped giving it to the resident on July 9. The resident spent five days in the hospital, records show.
Beacon Brook’s administrator, Linda Garcia, said that the incidents happened before she took over, so she could not comment.
On Nov. 6, Manchester Manor Health Care Center was fined $2,250 in connection with two incidents, including one on May 29, when a nurse’s aide had left a resident in a bathroom, heard a thump and then found the resident on his or her knees with a deep cut on the forehead. The cut required five stitches to close, and inspectors found that the aide had violated a safety rule at the home by leaving the residents…..

Annika Darling/CTLatinoNews.com Twelve years ago, after Maria Perez had a stroke, which left her struggling to communicate, to do things she used...

Caring for Elderly Powerful For Latinos

By Lisa S. Lenkiewicz CTLatinoNews.com   Caring for a loved one is an important duty for Latinos. Many within the community dedicate their...