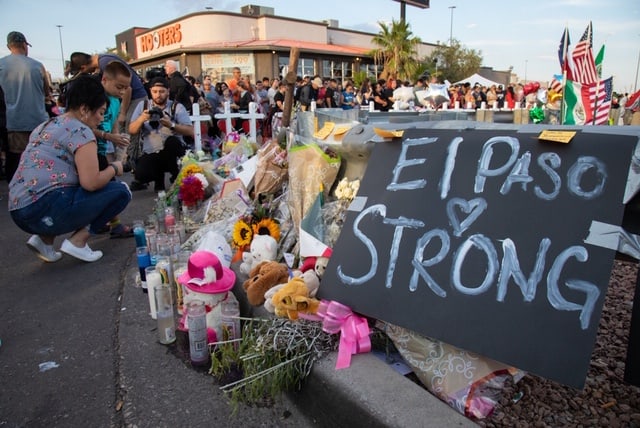 For many in Connecticut’s diverse Latino community, the recent attack by a lone gunman at a Wal-Mart an El Paso, Texas that left 22 dead has underscored their sense of solidarity with the targeted Mexican population while heightening concern for their own safety.

In particular, what happened in West Texas on August 3 was viewed as stemming from factors that pose a threat to all Latinos.

Several Hispanic leaders cited what they saw as the deadly impact of President Trump’s catering to white nationalists, dragging his feet on gun controls and his “racist rhetoric which dehumanizes and vilifies non-white migrants, even those who are U.S. citizens.

“As far as Donald Trump is concerned Puerto Ricans are a different variety of Mexicans,” said State Rep. Edwin Vargas of Hartford who was born in Brooklyn, N.Y. of Puerto Rican parents. Vargas said the El Paso massacre left him with a “mixed bag” of feelings, including fear, anger, and disappointment.

Yanil Teron, director of the Center for Latino Progress in Hartford, views Trump’s disparaging of Mexicans as camouflaging a wider racist agenda.

“The president appropriated the word “Mexican” for his inflammatory rhetoric, uses it as code language of inferiority for his white nationalist base,” Teron said. “He uses the word as interchangeable for what he sees as a homogeneous ethnic group of darker skin people, with one language, of inferior culture and without distinctive nationalities,” she said.

Teron, whose background is Puerto Rican, added, “He (Trump) and his followers are not interested in distinguishing and appreciating the rich culture, unparalleled history and the diversity of the many nationalities south of the continental USA.”

The CT Students for a Dream, a statewide organization that works with immigrant youth of all backgrounds from Central and South America chastised the Trump administration as having exacerbated the dangers posed by white supremacy and inadequate gun control.

Camila Bortolleto, campaign manager for the “Dreamers” group, called for “bold leadership in all levels of government” to address the problems behind the El Paso attack: “this country’s gun laws and white supremacy goes back generations, but has been emboldened and endorsed by the current administration.”

According to Bortolleto, who was born in Brazil, the dehumanization of immigrants and Latinos by the El Paso shooter is “the same ideology that is behind ICE (Immigration and Customs Enforcement) and U.S. Customs and Border Protection’s abuse … of immigrant children and families in U.S. custody.”

Bartolleto expressed sympathy for those people affected by the attacks in El Paso and Dayton, but asserted that “more than thoughts and prayers are needed to achieve justice and to “stop this once and for all.”

Werner Oyanadel, senior commission analyst at the state Commission for Equity and Opportunity, said he is “personally saddened about the xenophobia and anti-immigrant extremism taking place in the U.S. right now.”

Moreover, Oyanadel, whose background is Chilean, said, “I am more disappointed and sad about this hate-filled rhetoric coming from the top leadership in Washington D.C. which is fueling this hate and producing the deadly consequences to the detriment of our working families.”

In Connecticut, unlike Texas and especially the city of El Paso where 80 percent of all residents trace their roots to south of the board, Mexicans comprise only a small percentage of the state’s half-million Latino residents. Most Hispanics still stem from Puerto Rico and automatically are U.S. citizens.

However, Mexicans are one of the state’s largest immigrant groups. They accounted for 4.8 percent of all immigrants in 2016, falling behind India, Poland, Jamaica, and the Dominican Republic according to the American Immigration Council.

The cities with the highest concentration of Mexicans in their population are Windham (Willimantic), New Haven, Norwalk, and Bridgeport, with 5.24 percent, 2.8 percent, 2.28 percent, and 1.92 percent respectively, according to the Pew Research Center.

“If you took all the undocumented people away this would be a ghost town.”

Sister Mary Jude said the level of anxiety was not higher than usual after the El Paso massacre but had risen after Trump announced in July that there was going to be (ICE) raids in ten cities.

Moreover, Sister Mary Jude said most of the Windham Mexicans don’t have families in the El Paso area and were not directly affected.

The Guatemalans, she said, feel more vulnerable because they are the newer arrivals compared to the Mexicans.

One of the biggest challenges that Sister Mary Jude encounters in her pastoral duties relates to the immigrants “social conditions.” She said they are so busy trying to stay afloat economically that they can’t get deeply involved in their faith, but the church remains where they go for “all their important moments” such as sacraments and quinceañeras.

“They are God-fearing people,” the nun said, and may feel the “noose tightening  but see the church as a refuge and a place of support.”

In this article:El Paso Shooting, Hispanics and Donald Trump

Esai Morales: Why He Is An 'Actorvist'

He’s been a steady presence in Hollywood for more than three decades. Ever since his pivotal performance as Ritchie Valens’ troubled brother Bob...

Op-Ed: Why Hispanics Are Cheering For Jorge Ramos