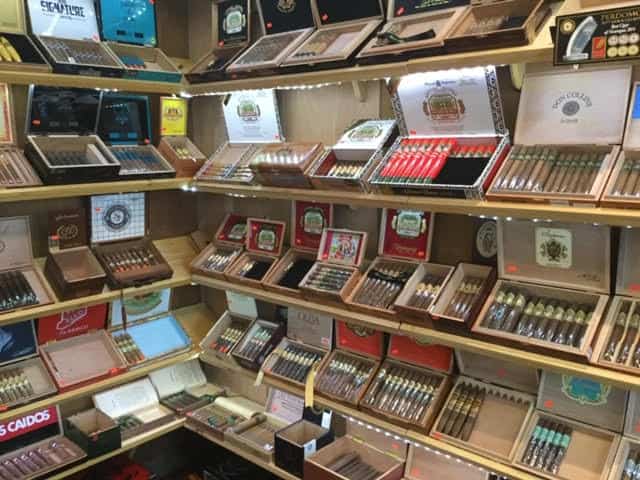 Several friends with Hartford ties and Puerto Rican backgrounds decided in 2015 that they had to find a place of their own for their weekly gatherings to smoke cigars and “chat about life.”

For several months, these cigar enthusiasts had been coming together Thursday evenings at each other’s homes, always outdoors and often on a back deck. But now winter was coming and more space was needed for the group which had grown from five guys to more than two dozen.

The informal social club had visited several smoking lounges in the Hartford area but these businesses had limited hours, closing as early as 7 p.m., which did not meet the needs of members, many of whom were police officers.

“This did not give us what we wanted “so we had to find our own little cubby hole”,” said Ricky Martinez, a Hebron police officer, and Hartford resident.

The search for a “home” went through East Hartford and Newington, but the eventual solution arrived when Martinez and his partners established Gentlemen’s Aroma Cigar and Lounge at 500-B Silas Deane Highway in Wethersfield. The three-year-old business is located on the lower rear level of a commercial building and accessed off Church Street.

What was crucial for the cigar devotees to gain town approval for their project was the inclusion of a retail element, namely a shop selling many varieties of primarily imported cigars under state licensing. Visitors can also buy accessories such as cutting implements, as well as Gentlemen’s Aroma shirts and other gear.

Gentlemen’s Aroma Cigar and Lounge is open from  2 p.m. to around midnight Tuesday through Saturday and on Sundays during football season. This is a bring-your-own-beverage operation.

Gentlemen’s Aroma “is working out for us and everyone is welcome to check it out,” said Roberto Gomez, another partner

The third partner is New York City native Edwin Sepulveda who works as a press supervisor for the Hartford Courant. Gomez was born in Chicago but along with Martinez grew up in Hartford with both attending Bulkeley High School. Sepulveda is connected to Martinez through an in-law relationship. There was a fourth partner, Jose Angeles, who has retired to Arizona.

The three principals take turns running the lounge. Sepulveda, who works nights, handles the days, while the two police officers take charge in the evenings.

Admittance to the lounge is through a “cutting fee” which consists of the purchase of two “sticks” (cigars) from the well-supplied humidor off the entrance. Gentlemen’s Aroma also sells a membership status that comes with a variety of perquisites and discounts.

The cigars range in price from $6.50 to $33 and have been imported primarily from Latin American although there are some  U.S. brands and a few cigars with Connecticut wrappers.

Buying the highest price cigar may not be the best course for an individual, Sepulveda said. “It is all based on taste.”

Gomez explained, “Every country has its time as favorite with Nicaragua the current leader.” Cigars from the Dominican Republic are also popular, he said.

The partners have visited Nicaragua and are in contact with cigar manufacturers in Puerto Rico, whom they expect will be producing a 100 percent island blend next year, said Gomez who owns land in Juncos and recently visited the island.

Although the lounge’s title and logo may convey that this a haven for men, women are welcome and some have become members.

The lounge hosts what Sepulveda calls “unorthodox events” that appeal to both genders. “We have comedy nights every three months and painting nights for the ladies,” the East Hartford resident said.

The partners, who are fluent in Spanish, wanted their lounge to have a Latino feel. This atmosphere is expressed among the eclectic decorations and a mural with Puerto Rico themes that were painted by club member Tony Collazo.

Moreover, one of the most visible features is a set of conga drums, which the partners said entice some loungers to display their Latino musical talents, usually late in the evening.

Many of Gentlemen’s Aroma patrons come from law enforcement, the lounge also attracts teachers, firefighters, plumbers, and other tradespeople, politicians, and even a judge, Martinez said.

The lounge also has become a sort of an exchange where someone needing, for example, a diesel technician, an electrician or carpenter might make a connection, Martinez said.

Essentially, what began as a few friends smoking cigars at the Hartford home of BigRay Ramos had metamorphosed into a successful enterprise where men and some women from diverse endeavors can buy cigars from a walk-in humidor, relax and smoke in comfortable sitting areas. Patrons also can watch sports events on mounted television screens, store extra smokes and accessories in small lockers, discuss politics, sports, and other subjects.

Gentlemen’s Aroma also pays a lot of attention to what had been a focal point of the original social gatherings, helping the less fortunate in Hartford.  “As we met at each other’s houses we talked about making a difference,” said Gomez, a Newington resident who recently completed a four-year stint as a resource officer at New Britain High School.

“These were guys who grew up in Hartford and had made it,” Gomez said, and now they wanted to give something back to the community.

As a consequence, Gentlemen’s Aroma works with local charities to conduct food drives at Thanksgiving and to collect toys at Christmas. An annual smoke out at a private lake also raises money for a youth team in Hartford’s Clemente Baseball League.

The lounge also is involved in the annual Unity Ride in which local and state police, as well as officers from around the world, each May travel from New York City to Washington, D.C. via bicycle. The money raised each May through sponsorship of the riders goes toward the Wall for Fallen Officers in the capital and to help their families.

“We are “huge on family,” Martinez said, and creating a  sense of belonging has become an important element in the ambiance the partners have fostered at Gentlemen’s Aroma.

“You come in as a guest and leave as a family member,” Martinez said, and when you return it is ‘welcome home.'”