“When it comes to soccer in Spanish, there is absolutely no lack or shortage of coverage but in English, it’s very minimal,” said Joe Rodriguez, the owner and editor of El Tri Online, a media company covering Liga MX, for the Latin American audience in English.

Rodriguez from Bristol, Connecticut is a Mexican American producer and sports journalist who worked at ESPN until 2017 when he left to create his own media company, El Tri Online—named after the Mexican national team.

According to the 2019 State of Latino News Media, an analysis of media serving the Latino population in the U.S., most Latinos in America are English speaking or Bilingual. There are many media outlets across the country catering to Latinos, but mostly in Spanish. The study found that a majority of U.S. Latinos are American born, English dominant, and prefer to consume news in their native language.

The big sports networks like ESPN and Fox Sport have programs dedicated to soccer, but they cover European soccer and MLS. As a producer for SportsCenter, the network’s re-cap, and analysis of professional sports throughout the day, Rodriguez saw an opportunity to better serve an audience for Mexican soccer in American media.

“I noticed there was a lack of coverage in the English language (media) as far as Mexican soccer went during my time at ESPN,” said Rodriguez.

Liga MX is Mexico’s first division soccer league has a strong following in the US. During the 2018-2019 season, their games were broadcasted in English on American television for the first time.

“Mexican players are learning English because they understand the value in being able to do interviews,” Rodriguez said. “It allows us to put them in the spotlight here in the U.S. and it’s a stepping stone for those of us who want to feel included in the coverage of the sport that we love.”

Despite being the largest growing demographic in the country, according to the U.S. Census Bureau, Hispanic/Latinos make up 18.3-percent of the nation’s population and are highly underrepresented in media. With El Tri Online, Rodriguez employs Latin American freelancers and interns across the country, who are fans of Mexican soccer.

Leo Hernandez and Louis Bravo run ETO’s social media pages. The two update social media platforms daily, leading to the majority of viewership to come from their Facebook page, on average 1000 to 1500 visitors a week.

Latinos are also willing to purchase products based on the commercials they view in between sports programs.

“I think people are really starting to really notice the power that Latinos have when it comes to media,” Rodriguez said. “A lot of companies are going to be more aggressive in targeting Latinos who are consuming media and spending.”

Latinos in the United States have $1.7 trillion in purchasing power. This means Latinos are driving growth and spending in the country, and products targeting Latinos are seen with more significant opportunity for retailers.

Liga MX halted their games at the start of the COVID-19 pandemic, yet El Tri Online continued to produce new stories and bi-weekly podcasts while adhering to social distancing guidelines.

“We ended up creating a FIFA tournament, which allowed people to play from their own homes and it obviously helped get a bigger reach,” Rodriguez said of creating content during the pandemic. “It was just a matter of making sure we were constantly creating.”

In order to supplement and continue running the El Tri Online, he also works in media consulting and freelance projects. Despite the uncertain economy, Rodriguez has plans to continue covering Mexican soccer until the 2022 World Cup.

“This upcoming year I think it’s going to be key. We will be able to survive through 2021. I think there’s a big opportunity for us to actually become a profitable entity in 2022 because of the World Cup. Yeah, so I think that’s kind of like the goal in mind, to try to stay afloat,” Rodriguez said. 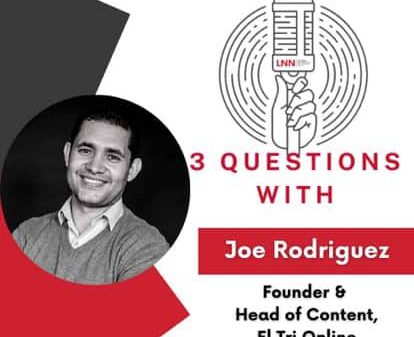 All In the Family – Part II: Latino Businesses Passing Torch To Next Generation

Doug Maine CTLatinoNews.com The entrepreneurial drive of Latinos in the United States has been documented in many studies. Most new businesses created by...